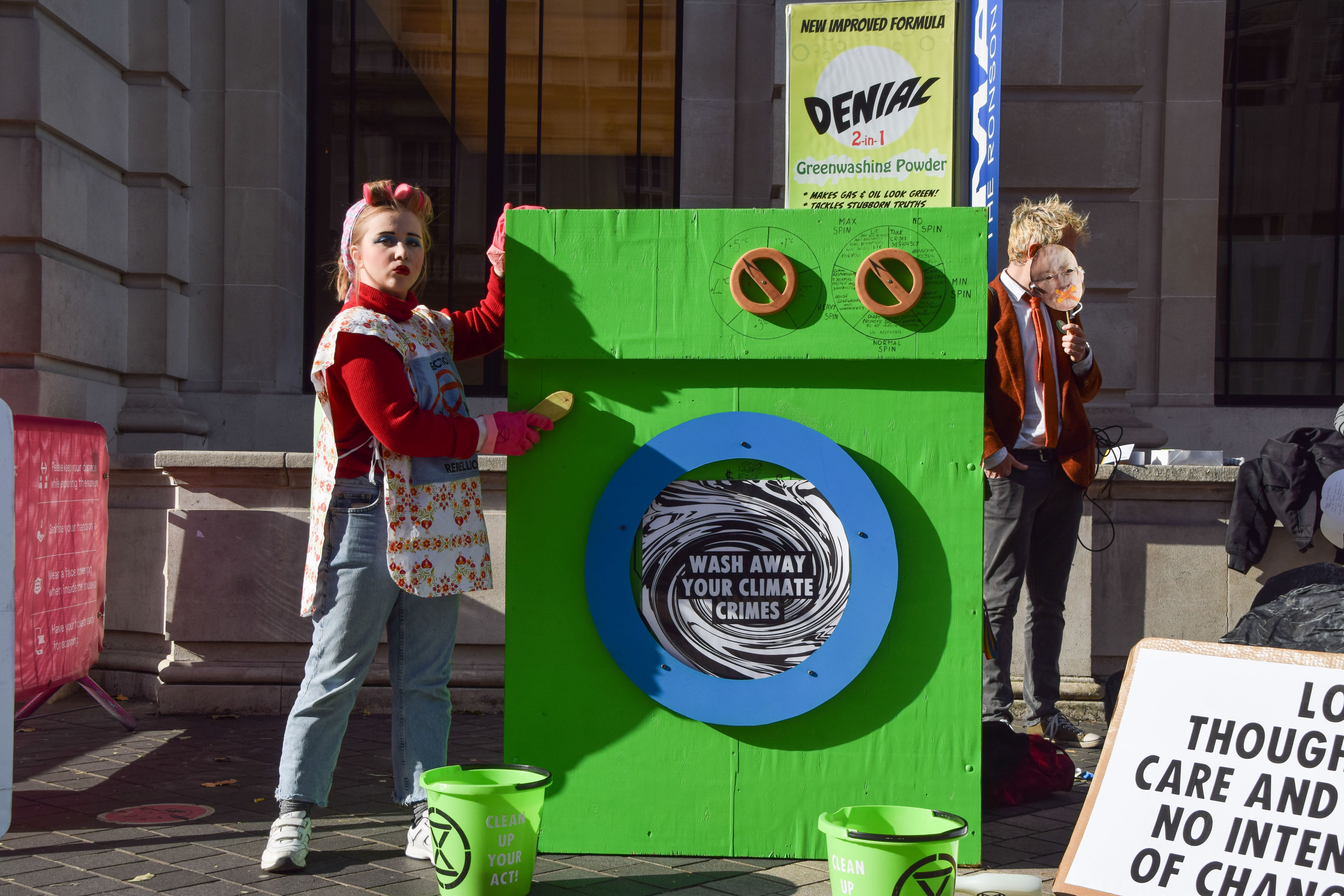 Is Big Tech 'greenwashing' its environmental responsibilities ahead of COP26?

It wouldn't be the first time.

COP26, the UN’s climate change conference billed as “the world’s last best chance” to prevent the most disastrous effects of global warming, kicks off in Glasgow on Sunday. Delegates from around the world will convene to hammer out another round of emission reduction targets with a goal of achieving “net zero” greenhouse gas emissions by mid-century and keeping our rapidly heating planet temperature rise to a more manageable 1.5 degrees Celsius, rather than the calamitous 2.7 degree bump currently predicted.

With the eyes of the world firmly focused upon humanity’s disastrous planetary stewardship to date and wondering what might be done to rectify our past pollution, leading tech companies in recent weeks have become increasingly vocal in their pledges to reform business operations to help “save the planet.”

Apple, for example, announced the launch of 10 new environmental projects as part of its Power for Impact initiative as well as that 175 of its suppliers will switch to using renewable energy, the company said in a statement Tuesday, and that, by 2030, every device the company sells will have a net-zero climate impact. The company also noted that it has already reduced its carbon emissions by 40 percent over the past five years.

Google, on the other hand, pointed to its goal of achieving net zero emissions “across all of our operations and value chain by 2030,” according to a blog post published on Monday. The company also called out its efforts to assist its partners with reducing their own emissions, such as through the Environmental Insights Explorer (EIE) program which helps cities map their pollution data, air quality and solar power potential. Google also made sure to mention just how sustainable its products actually are for consumers.

Microsoft made even loftier claims on Tuesday: to be “carbon negative by 2030 and by 2050 remove from the environment all the carbon the company has emitted, either directly or by electrical consumption since it was founded in 1975,” before expounding on the rapidly increasing efficiencies of its massive data centers.

But do these protestations of environmental progress signify a legitimate effort by Big Tech to clean up its collective act or are they simply more PR spin seeking to offset their bad behavior? Because we’ve seen this sort of behavior before. It’s called greenwashing.

Merriam-Webster defines greenwashing as “expressions of environmentalist concerns especially as a cover for products, policies, or activities.” The term was first coined in 1986 by environmentalist Jay Westerveld in an essay examining the hotel industry’s practice of leaving placards in guest rooms admonishing them to reuse their towels to help “save the environment.” Back then, people got their news from three places: newspapers, television and radio — the same sources for virtually all advertising at the time. This information availability imbalance created a system wherein corporations could promote themselves in any flattering shade they wished, regardless of their actual actions, with little fear of the public actually realizing that a deception had even occurred.

The practice of greenwashing in America goes as far back as 1953 — though it wasn’t called as such at the time — when beverage manufacturers launched the Keep America Beautiful campaign, reminding the public to be good environmental stewards and not litter, in what was actually an effort to forestall incoming regulations on the use of disposable containers. Greenwashing metastasized in the 1980s as Big Oil companies ladled out their own laudations while they sought to minimize their own liability and culpability in environmental pollution scandals and global warming. These companies went so far as to work to actively prevent the government from passing clean energy laws. But you wouldn’t know it from their television ads.

The spot above is from ​​Chevron’s People Do campaign. It should be noted that many of the programs promoted in that campaign were actually government-mandated actions and that while this campaign was running, Chevron was repeatedly found in violation of the Clean Air and Water Acts, and was caught dumping oil in wildlife refuges.

Exxon’s actions through the ‘90s were equally abhorrent. The company continually muddied the waters around humanity’s role in climate change, knowing full well how the burning of fossil fuels inflamed the growing crisis.

In 2017, a Harvard study of ExxonMobil’s climate change communications (both internal memos and public-facing advertorial newspaper content) produced between 1977 and 2014 found that while more than 80 percent of internal documents acknowledged that human activity was largely responsible for global warming, just 12 percent of the company’s advertorials did the same.

"Within hours of publishing our study, ExxonMobil responded with ad hominem attacks," Harvard Research Associate Geoffrey Supran, told Client Earth last year. "I was invited by the European Parliament to testify about ExxonMobil's history of climate denial. The day before, they sent a private memo (which has now been leaked) to Members of Parliament to try to discredit me. If these experiences tell us anything, it's that the Exxon tiger hasn't changed its stripes."

Greenwashing in the modern era

Greenwashing remains a widely-used marketing tactic even today — and not just the mealy-mouthed word salads regurgitated by oil executives during a House Oversight Committee hearing this Thursday.

Take bottled water, for instance. Nestle alone has spent millions of ad dollars over recent years in an effort to convince the public that, as it claimed in 2008, “bottled water is the most environmentally responsible consumer product in the world.”​​ This despite the fact that barely 31 percent of plastic water bottles actually get recycled and the rest end up cluttering landfills and the ocean — scientists estimate that around 8 million metric tons of plastic entered the ocean annually.

And they are far from alone. Coca-Cola came under fire in 2015 in Australia when it rolled out Coke Life, a supposedly light sugar variant packaged in a bright green can. Sure it made consumers feel like they were making a health conscious purchasing decision but that was despite health advocates pointing out that “the reduction to 10 teaspoons of sugar in a 600ml bottle made little difference in terms of health impacts.” More recently the company launched its World Without Waste campaign which, at its essence, pushed consumers to simply recycle more, rather than actually adjust the way the company conducts its business.

The fashion industry is a huge contributor to the climate-and ecological emergency, not to mention its impact on the countless workers and communities who are being exploited around the world in order for some to enjoy fast fashion that many treat as disposables. 1/3 pic.twitter.com/pZirCE1uci

In 2013, Tyson Meats was taken to task over the fawning self-framing of how it cares for its animals and their relative well-being, not two years before five Tyson supplier employees were charged with 33 counts of criminal animal cruelty for repeatedly kicking and punching pigs. And who can forget Volkswagen, which launched a “Clean Diesel” marketing campaign amid the Dieselgate emissions scandal?

Why Greenwashing works so well

So why do companies insist on greenwashing their operations rather than actually reform themselves? Because it is far more profitable to simply adjust public perception than it is to make meaningful reforms. A 2015 Nielsen poll found that 66 percent of respondents would be willing to pay a premium for “environmentally sustainable products” and among those willing to pay more more than 50 percent were influenced by sustainability factors such as “a company being environmentally friendly (58 percent), and company being known for its commitment to social value (56 percent.)”

It’s also because we, collectively, keep falling for it. Consumers’ desires to help address the climate crisis, especially in the face of barely tepid responses from world governments, primes us to view virtually any action on that account as a positive one. “SDGs [Sustainable Development Goals] and ‘net zero’ have kind of created an opportunity for a lot more greenwashing, because it allows you to describe yourself as a green company when you’re doing a thing that’s fundamentally not green,” Dave Powell, co-presenter of the Sustainababble podcast and the former Head of Environment at the New Economics Foundation, told Client Earth. “You effectively buy your way out of trouble, for example, by promising to plant large numbers of trees.”

"As part of their climate strategies, many companies are relying on voluntary carbon offsetting. However, if not done well, offsetting can result in greenwashing,” Dr. Aoife Brophy Haney, Research Lecturer at the Smith School of Enterprise and the Environment at the University of Oxford, added. “To mitigate this risk, government and society at large should support the use of best practice guidelines, such as the recently released ‘Oxford Principles for Net Zero Aligned Carbon Offsetting’, to help ensure offsetting is done in a rigorous and credible way that ultimately contributes to net zero goals."

And, most importantly, companies continue to engage in greenwashing because there is very little downside to doing so, at least from a regulatory perspective. In the US, the FTC guidelines for environmental marketing claims are only voluntary, though the FTC does retain the right to prosecute outright false or misleading advertisements.

However, cracks in the greenwashing facade may be beginning to show, starting in the financial sector, as regulators’ interest in ESG fund (environmental, social and governance) oversight grows. As Financial News London reported Monday, German asset manager DWS has recently been investigated by both US and German regulatory agencies after a former employee accused the company of fudging the environmental credentials in its 2020 annual report.

“You have to be careful, as there is a big reputational risk,” an unnamed senior executive at a European asset manager, told FN London. “We’re not saying we were bulls***ing before, but there’s a recognition now that it’s more complicated.”

“Most have probably been a bit too pushy in marketing their alleged ESG expertise and they are now applying more caution,” ​​Philip Kalus, managing partner at consultancy Accelerando Associates, added. “Some would even say there is panic in the house. Nobody wants to be the next one being accused, but it is an important and overdue wake-up call for the industry.”

That’s not to say that environmental pledges made by Apple, Google, Microsoft or Amazon are meant to intentionally gaslight the public (though Exxon, Shell and Chevron absolutely did). These companies have a vested financial interest in at least appearing as positively as possible to their customers because, frankly, nobody’s going to have time to talk about the slick new features of the Pixel 8 or iOS 15 when we’re in the midst of a global climate meltdown-slash-water war.

Is Google’s “moonshot goal” of operating its data centers and campuses entirely on carbon-free energy by 2030 going to make more than a blip of difference when it comes to mitigating the impacts of climate change? Probably not, definitely not on its own and certainly no more so than Microsoft’s promise to reduce water use in its data centers by 95 percent by 2024 or Apple’s plan to build robots to more effectively recycle old handsets. But these claims do not, in and of themselves, constitute greenwashing. Their changes may not be enough to make a noticeable impact at this point, but these good faith efforts attempt to do something, anything, to stave off what could well be humanity’s self-inflicted extinction. And given how America’s most recent effort to invest in environmentally responsible energy technologies was single-handedly killed off by the coal-loving Senator from West Virginia, these sorts of corporate initiatives may likely be the best we’ll soon see.