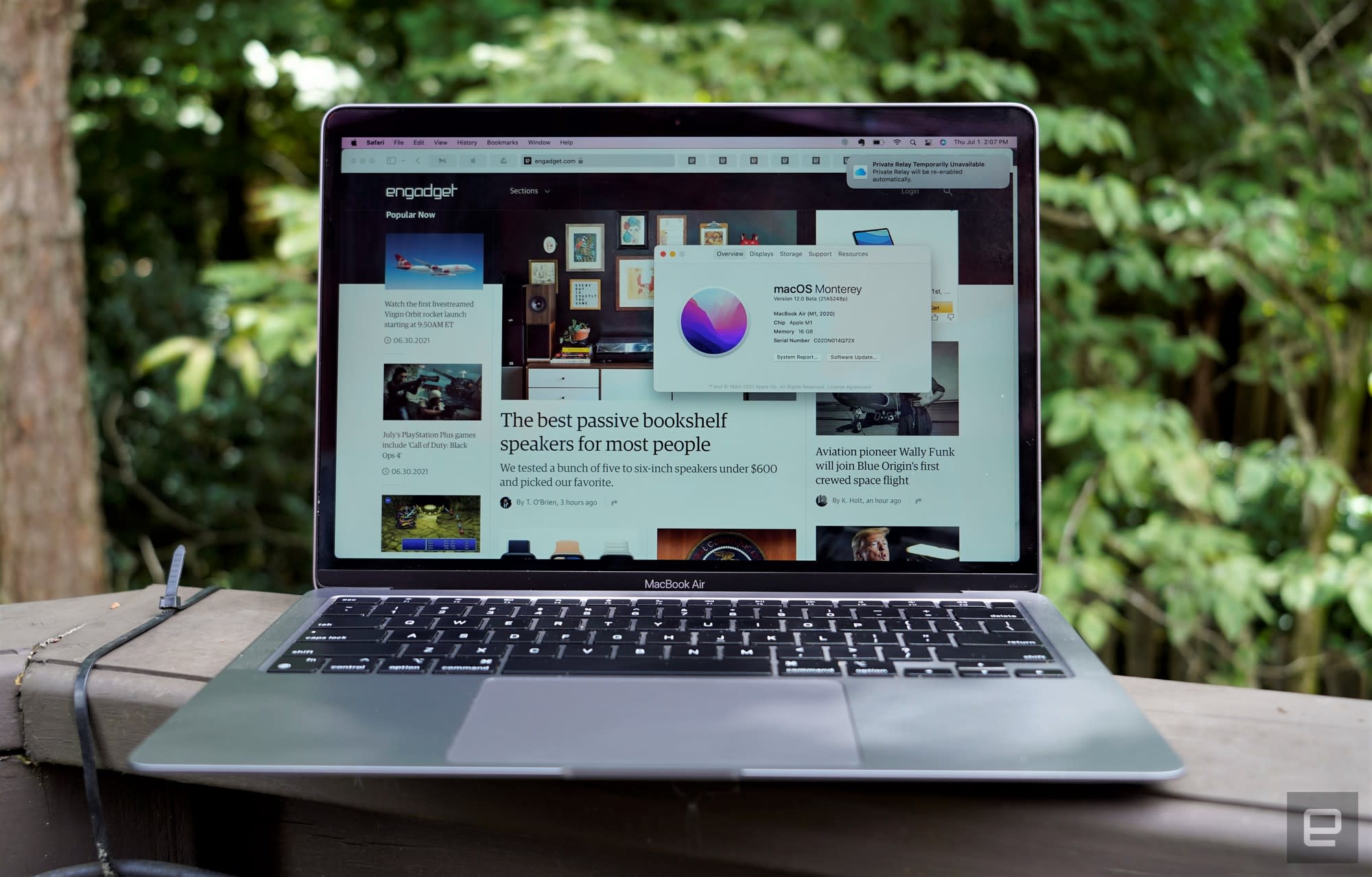 macOS Monterey preview: All about FaceTime and Safari

It's a small step forward for Apple's desktop OS.

With all of the changes that came to macOS Big Sur last year, we didn't expect Apple to deliver much with this year's update, Monterey. And for the most part, that prediction held true. iOS 15 and iPadOS 15 got the bulk of the upgrades this time around. But that doesn't mean Apple has forgotten about its computers. After testing out the first macOS Monterey public beta, I'd wager Mac fans will be pleased to see just how much it pushes Apple's desktop vision forward. It's not a dramatic leap like Windows 11, but it doesn't really have to be.

What's in the public beta?

This Monterey public beta includes the FaceTime and SharePlay updates, which will also show up in Apple's mobile operating systems. There's also the dramatically redesigned Safari browser, and improved Focus options for managing notifications and other distractions.

Unfortunately, you won't see what's perhaps the most anticipated new feature: Universal Control. That lets you use a single keyboard and mouse to control multiple Macs and iPads simultaneously. Given just how complex the feature appears to be, it makes sense for Apple to take time and make sure it's fully baked. It'll likely pop up in a future beta as we get closer to a final release in the fall.

After loading up the Monterey public beta for the first time, I had a hard time telling if I had actually upgraded from Big Sur. But then I launched the new Safari browser, which sent my head spinning. Say goodbye to the tabs bar — and get used to juggling your tabs, address bar and navigation buttons all in a thin menu at the top.

Clearly, the goal is to devote as much screen space as possible to web pages. That makes for a better browsing experience on smaller devices, like the 13-inch MacBook Air I’ve been using to test the software. But it also means a lot more clutter when trying to sort through your tabs. It's not bad when dealing with just a few tabs, but once I racked up 10 or more, they all got reduced to their site icons. It used to take a lot more tabs to make Safari that unusable.

Although you can always hover your cursor over the icons to see a small preview of the page, that can be a slow process if you're trying to fish through tons of tabs from one site. You can also bundle tabs together in groups now, which could be useful if you're on a serious research binge. You can name tab groups and swap between different sets in an instant. It's a more elegant solution than opening more Safari windows and best of all, it's also synced across the browser on iOS and iPadOS.

Beyond the new interface, Safari is still the zippiest browser on macOS by far. I typically juggle Chrome and Safari at the same time — it's helpful for keeping work and personal logins separate — and Apple's browser always loads pages just a bit faster.

In macOS Monterey, FaceTime is starting to look a lot more like Zoom. And I suppose that makes sense, given just how essential group video chats have become over the past year. Now you can start a FaceTime call without ringing anyone directly. Once you're in, you can either invite your friends or create a link for anyone to join, even if they're on an Android device. Your calls are more like events anticipating a group of people, instead of individual chats where you may rope in a friend or two.

During my testing, a friend was able to join my FaceTime weblink via his iPhone running iOS 14, but he couldn't hear anything. When he moved over to his Mac, everything worked fine. Since he was running macOS Catalina, though, it still showed up as a web FaceTime call, instead of automatically opening the app.

If you have AirPods or other headphones that support Spatial Audio, you'll also be able to hear people’s voices coming from different directions based on their screen position in FaceTime. They'll need to be running the Monterey or iOS/iPadOS 15 beta for the feature to work, but it'll certainly be more useful once those updates finally drop. During my testing, I heard two friends coming from the left and right channels of my AirPod Pros. It's like you're sitting at a small table together. I'd imagine it would also be useful for users who are visually impaired and hard of hearing, as the separation makes it easier to keep track of multiple people.

I’d imagine many more people will be FaceTiming their friends to take advantage of SharePlay, which allows you to watch shows and listen to music with others. Using it could be more intuitive, though. When trying out the feature with other Monterey and iOS 15 beta testers, it took us a while to figure out there wasn’t a SharePlay button anywhere within FaceTime. Instead, you have to start playing a piece of media, which triggers a pop-up notification that asks if you want to share it with friends, or view it on your own.

Once I figured that out, it was nice to be able to sit back and watch a few minutes of Mythic Quest with my friends. Unfortunately, even though FaceTime is opening up to Android and Windows users with web video chats, those folks won’t be able to enjoy SharePlay content. And it remains to be seen if and how media providers adopt the service. With Apple TV+ content, you and your friends need to have subscriptions to watch anything. I can’t imagine Netflix or Disney+ being more lax and allowing a single subscriber to share something with friends.