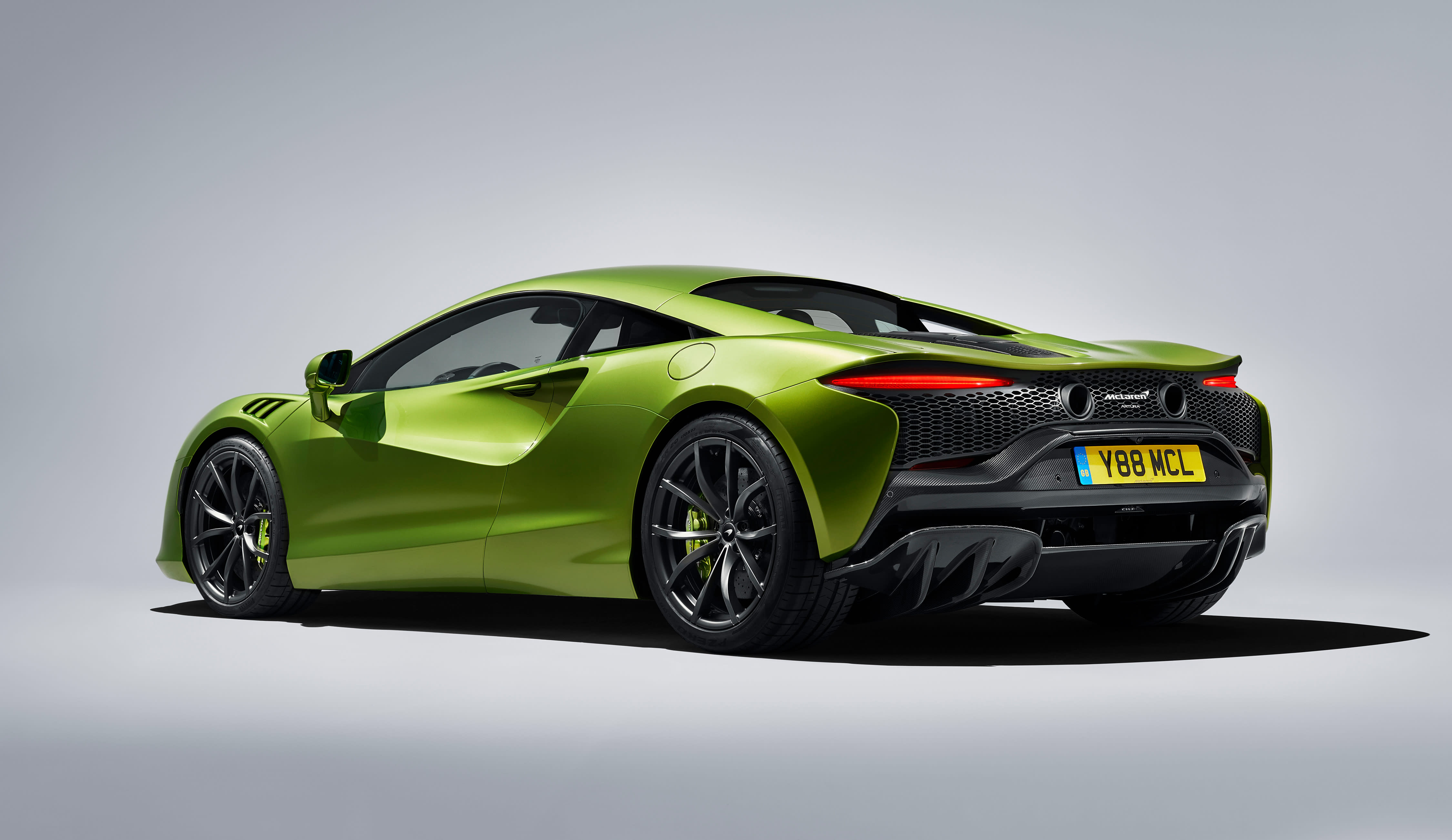 It can travel up to 19 miles on electric power alone.

McLaren has been in the business of making ludicrously light and ridiculously fast supercars for nearly 60 years but it wasn’t until 2021 that the company put one of its High-Performance Hybrid (HPH) designs into full production. Say hello to the $225,000 Artura.

The Artura is svelte for a supercar, even by McLaren standards. It’s the first model from the British automaker to use the McLaren Carbon Lightweight Architecture (MCLA) which reduces the weight of cabling used in the electrical system by 10 percent compared to other McLarens and delivers a curb weight of just 3,303lbs including the 7.4kWh battery pack. McLaren did not specify exactly what sorts of charging systems the Artura will be compatible with but did estimate that the battery pack could be refilled to 80 percent capacity “in just 2.5 hours with a standard EVSE cable.”

The powertrain is driven by McLaren’s new twin-turbo V6 ICE outputting 577 HP and 431 lb-ft of torque. Dubbed the M630, this engine manages to save 110 pounds of weight and a few inches of length over the company’s conventional V8. It’s paired with a 94 HP, 166 lb-ft axial flux E-motor which can propel the Artura up to 19 miles on electric power alone or work in harmony with the V6 engine to notch a 0-60 mph in 3.0 seconds, hit 0 - 124mph in 8.3 seconds with a governed top speed of 205 mph. Interestingly, the Artura’s twin-clutch gearbox has no Reverse setting. To get the car to backup, the E-Motor simply reverses its rotation on the driveshaft, turning in the opposite direction.

“We want you to look at our cars and understand what their objective is,” Rob Melville, Design Director of McLaren Automotive, said during Tuesday’s press event. “Let's say the Senna is a 100 meter sprinter, the Speedtail is the Olympic swimmer and the Artura would be the decathlete — very good at many things.”

Melville also discussed some of the the principles of the Artura’s design, including the concept of purity. It’s “not just about purity of line and volume but about purity through the integration of components,” he said. “And by being able to create a car that integrates components, we're able to save weight, we're able to create a very clean sleek design, and also improve aero, and ultimately improve the craftsmanship and execution.”

While the Artura is clearly built for driving enthusiasts, the vehicle does offer a slew of comfort and driver assist features that will ensure you don’t only pull it out of the garage for weekends at the track. Its dual-screen infotainment system mirrors Apple CarPlay and Android Auto as well as offers McLaren’s traditional Track Telemetry and Variable Drift Control apps (which should absolutely be used at the track), and a revamped navigation map display in the central instrument cluster. And for when you want to tune everything out and just drive, the infotainment system can enter Stealth mode, which minimizes and hides all but the most pertinent vehicle data from your view.

The Artura also offers a host of ADAS features as well, including “Intelligent Adaptive Cruise Control with Stop/Go; Lane-Departure Warning; High-Beam Assist and Road-Sign Recognition,” according to the company’s press release. More features could be added in the future as the Artura allows for OTA software updates.

Expect to see McLaren’s production hybrid supercar later this year when they begin rolling out in Q3.