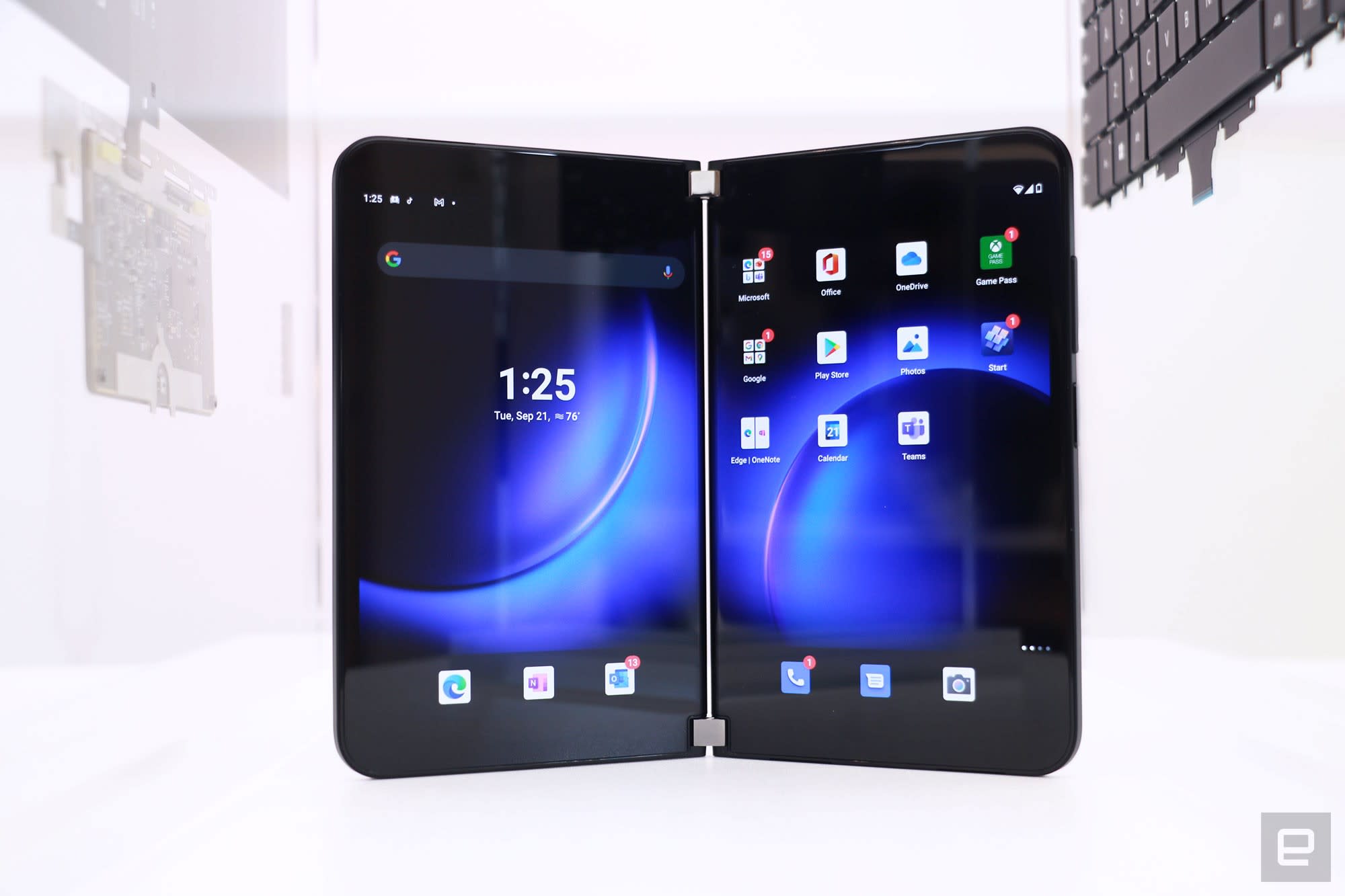 But the big new camera bump means you can’t flip one screen all the way over anymore.

As we continue to wait for Microsoft to release the Surface Neo, the company is already unveiling the second generation of its dual-screen Android phone. The Surface Duo 2 is a $1,500 device that’s slightly thinner than its predecessor and brings some serious camera improvements. Specifically, it now has three sensors instead of the lone 11-megapixel camera used in the last-gen setup. I had a chance to check out the Duo 2 briefly at a (COVID-safe) demo in New York, and I’m so far cautiously impressed by its updates.

Microsoft’s demo area wasn’t the best place to take memorable photos, but I did try out the Duo 2’s triple lenses on an Xbox controller. I easily switched from the main camera to the ultrawide and telephoto options, and also gave Portrait mode a go. I can’t judge the quality of these photos yet, since I could only view them on the Duo 2’s screens, but I already feel like the bugginess I experienced with the original Surface Duo is mostly gone.

That’s not surprising, since one of the biggest issues plaguing the Duo’s camera software was that it only had one camera that sat above the screen. You had to flip the phone so that the correct side was facing you when you wanted to take a selfie, and have the camera side face out for other shots. This meant the device needed to know which screen to activate based on how you were holding it.

With the triple cameras sitting on the Duo 2’s back/outside and a 12-megapixel front-facing camera, there’s no longer a need to figure that out. It’s a shame, though: There’s also no longer a way to take photos without having the Duo 2 opened up; if you’re shooting with the rear cameras, you must use the device with both screens facing you.

The bulky camera bump also prevents you from flipping one of the screens all the way over to have both displays lay evenly back to back. I never really cared to do that with the original Duo since it was too wide to use as a makeshift phone, but it’s still disappointing that with this change, the Duo 2 will really mostly be used in Book mode. It’s no longer a phone-tablet hybrid.

I’m surprised at this functional shift, since one of the refinements Microsoft made with the Duo 2 is narrowing the device’s overall width. Each panel now measures 5.8 inches instead of 5.6 inches on the original, for a combined 8.3-inch screen as opposed to an 8.1-inch canvas. But they’re also taller, with resolutions of 1,344 x 1,892 instead of the older 1,350 x 1,800. This would have made the Duo 2 slightly more phone-like in shape, but in person I frankly couldn’t tell that it had changed in size at all.

Speaking of, Microsoft claims that this is the thinnest 5G mobile device on the market. Indeed, at 5.5mm (or 0.21 inches) thick, the Duo 2 is certainly sleek. The company also introduced a slight curve on the inner edges of each screen — an effect that’s reminiscent of pages in an open book. This could potentially make it easier to drag apps across screens, which I was able to do quickly during my demo.

Another new feature that makes the Duo 2 feel faster than the original is its higher refresh rate. Both panels now run at 90Hz and are supposed to be in sync, too. I loaded up Engadget’s website and expanded it across the two displays, scrolling frenetically up and down on an article, and the two halves of the page did indeed keep pace with each other. I’m used to a 90Hz screen by now, thanks to long-term use of the Pixel 5, but it’s certainly a nice feature to see.

Microsoft also added support for its new Slim Pen 2, which offers haptic feedback so doodlers or artists can feel a vibration when they put the stylus to the screen. It also tries to mimic the feel and resistance of pen on paper, and I spent more time with this on the new Surface Laptop Studio than on the Duo 2.

Frankly, the fact that I encountered so few hiccups with the Duo 2 surprised me. The original Duo was riddled with bugs, and even simple things like expanding an app to span both displays were difficult. During my preview, this went smoothly. Admittedly, I didn’t spend much time with the Duo 2, so I’m still cautious about the seemingly improved software, but Microsoft has indeed been working on fixing past issues.

That responsiveness could also be attributed to the beefy Snapdragon 888 processor that powers the Duo 2, though we’ll have to perform real-world testing to be sure. We’ll also need to run our own battery test to see how long the Duo 2’s 4,449mAh cell lasts, as well as how successful Microsoft was at fixing the flaws of the original. I’m curious to see if the new triple camera system and the problems it introduces are a bane or boon to the Duo series, but for now I’m cautiously optimistic about the second Duo. You can pre-order it now starting at $1,500, and it’ll be available on October 21st. That said, I suggest you wait until we can review one before spending any money on a device that’s still so novel.

Follow all of the news from Microsoft's fall Surface event right here.