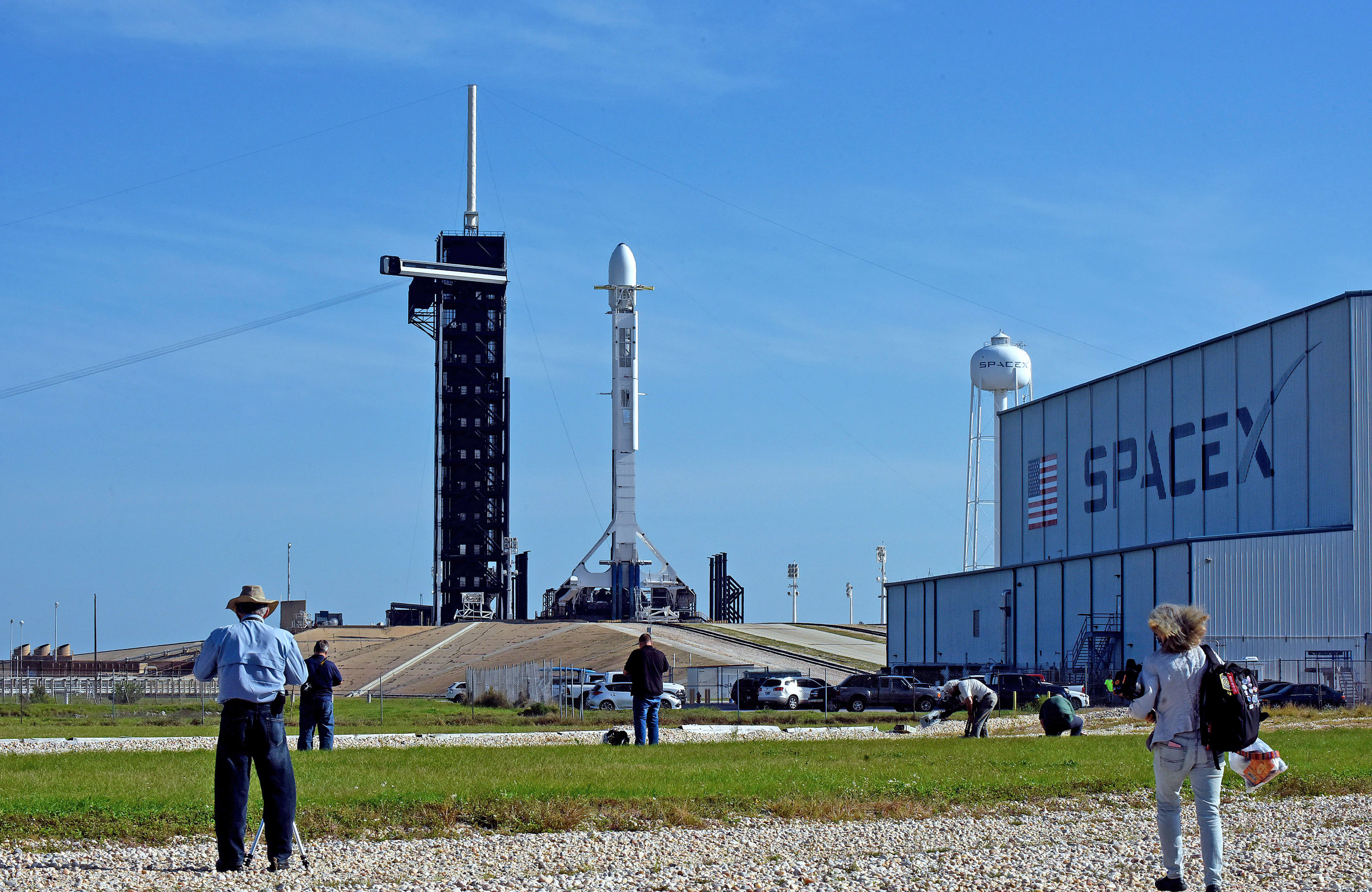 Is going to space truly essential during a pandemic?

Much about the world after the coronavirus pandemic remains uncertain, but one priority of the Trump administration remains steadfast: Damn it, we’re going to the moon.

There’s the recent signing of an executive order encouraging future moon mining, NASA issuing multimillion-dollar contracts for lunar landers and the administration introducing new international standards for moon mining. These are all a continuation of existing policy: the Artemis program, an effort to return humans to the moon by 2024, initiated by the Trump administration in 2017.

Moon-mining machinations are perhaps the most grandiose example of space work continuing through the pandemic, but they’re far from the only ones. Few might immediately think of astronauts as essential workers or rocket launches as mandatory for the nation’s survival. But based on the permitted activities of both NASA and private companies, space has managed to encounter relatively few interruptions or delays compared to more present-tense industries.

In some ways, space isn’t so much essential as it is inertial -- sometimes literally (as in the case of the planetary alignment-contingent launch of the Perseverance rover to Mars, scheduled for mid-July) but often bureaucratically. Well before anyone even gets to the point of a socially distanced rocket launch, there are budgets to be approved, contracts to be issued and lots and lots of technical work. It’s a huge investment, which is one reason NASA administrator Jim Bridenstine offered for the agency’s continued work supporting the International Space Station (ISS) -- which, because it’s collectively owned and maintained by five space agencies, could be understood as both technically and diplomatically essential.

In some ways, space isn’t so much essential as it is inertial

In an interview with the Planetary Society’s podcast, Bridenstine described the ISS as a “$100 billion investment by the American taxpayer.” That investment includes the cost of sending astronauts to the ISS, which for years has happened at Kazakhstan’s Baikonur Cosmodrome to the tune of $80 million per seat (in 2019, four American astronauts went). The crewed launch of astronauts to the ISS from Florida scheduled for May 27 — the first crewed launch on American soil since 2011 — could be seen as essential because it not only supports ISS operations but also demonstrates that the United States can stop paying Russia to send our astronauts to space.

“Our mission fortunately hasn't really been impacted by COVID-19, at least not directly,” said Ken Shields, chief operating officer of the ISS National Lab, in an interview with Engadget. Since March, crew have returned from and been sent to the ISS, and research continues relatively uninterrupted.

That’s good, since interruptions in space are risky. “In terms of supply chains, the ISS is a pretty precarious place,” explained Fred Scharmen, associate professor in architecture at Morgan State University and researcher of space habitats. Describing the conditions for the rotating crew of the ISS, Scharmen noted, “Those people are trapped up there. They can't grow their own food, they don't even do their laundry up there.” (Laundry, along with other garbage, is actually burned up on reentry to Earth’s atmosphere.) It’s kind of important to keep taking care of the people on the ISS.

It’s also important to keep taking care of the research: There aren’t exactly alternative locations for long-term experiments in microgravity (which is of interest to biologists and material scientists), and the ISS’ location in low Earth orbit makes it a unique spot for collecting data for earth sciences. “Most of the research that we plan needs some level of crew attendance,” Shields said. “There are some things that a human in the loop can do that no amount of automation can equal.” A lot of that research is tied to academic institutions and to grant budgets that don’t have a pause button for a pandemic. Inserting an 18-month gap into sometimes multiyear research may not be a loss on that $100 billion investment, but it certainly is a loss to science.

Against the realities of the coronavirus, some of those priorities can seem a bit confusing. Seeing as the pandemic has already introduced delays to NASA’s in-house moon-mission activities (and the timeline of having a crewed moon mission by 2024 was wildly optimistic before coronavirus), why the push to keep private contractors moving along on Artemis?

The criteria for deciding what space work is essential to a government contract also has a fair amount of gray area that private companies appear to be exploiting. Prior to receiving the NASA contract on April 30 for its Starship rocket, SpaceX had already been doing tests of Starship during the pandemic, to the consternation and concern of residents around its testing site in Boca Chica, Texas. Were those precontract tests essential to national security or to ensuring that SpaceX won a government contract? (SpaceX did not respond to an interview request for this story.)

Last month, The Verge reported that Blue Origin was making employees prioritize a space tourism project over the Department of Defense-funded work that made it an essential business. Employees believed the company was actually trying to stay on schedule with the space tourism project to compete with Virgin Galactic, which conducted a test flight of its tourism rocket SpaceShipTwo on May 1 (its first flight at long-dormant headquarters Spaceport America). While the aerospace industry is on the federal government’s critical infrastructure list, most of the space work that’s continued through the pandemic has at least gestured at a pretext of government contracts.  Although Virgin Galactic recently announced a new NASA project, prior to the pandemic, SpaceShipTwo’s biggest government contract was with  the Italian Air Force, not the United States. The company apparently remains on track to begin doing tourism flights sometime later this year, assuming that anyone feels safe traveling and can afford a $250,000 ticket. Virgin Galactic did not respond to a request for comment.

The continued pursuit of a moon mission or space tourism in the midst of a global paradigm shift can partly be attributed to the bureaucratic inertia of space: NASA issues contracts in the middle of a pandemic because of funding allocations and budget decisions made months ago. Some of it’s the inertia of geopolitics: The moon mission and mining are part of a protracted chess game with China over, basically, who gets to own space. Elsewhere, it’s shaped by the inertia of markets: Private companies might be forging ahead with space tourism projects because they don’t want to lose investors. But some of it ultimately comes down to the inertia of wealth.

“Space is on a much larger time scale than our lifetimes,” said Erika Nesvold, co-founder of the JustSpace Allliance, an organization that advocates for ethical and just space futures. “It’s a time scale where things like the pandemic are small perturbations on the surface of the Earth.” Nesvold also noted that for the most part, “The people who are working on that time scale are fairly financially secure. They have the privilege to not think about the pandemic all the time.” Space tourism may not be a priority for many people right now, but companies selling space tourism are betting on the continued survival of the super rich after this. Companies can afford to prepare for that future market now because in the near term, their needs are already taken care of.

One could argue that there's something poetic, even moving, about continuing to pursue ambitious goals like a moon mission and space tourism in the face of this much planetary uncertainty. Western audiences have become accustomed to the invocation of human achievements in space as collective cultural milestones, events that transcend political borders and terrestrial conflict. It's been imbued into space since the first moon landing, in 1969. Bridenstine, the NASA administrator, echoed this sentiment in an interview with CNBC where he said that the upcoming crewed launch was “going to uplift America.” As Scharmen, the researcher, pointed out, “That's one of the persistent images of the United States at the end of the 1960s: This country in turmoil, but still able to achieve these amazing technological feats.”

While human space exploration remains an astonishing feat, it’s never been a completely apolitical one. “I think that space only becomes transcendent because people read the rhetoric around space that came from the Apollo era far too literally,” said Lucianne Walkowicz, Nesvold’s co-founder at the JustSpace Alliance. “Without knowing a lot of the history of why there was a human space program to begin with, people might think we did it because we really wanted to when its entire motivation was political.”

Nesvold added, “The popular conception of space as a commons for humankind all comes out of the Outer Space Treaty of 1967, which came out of neither the US or Russia wanting the other to put nukes in space,” not solely out of a benevolent desire to unite humanity’s quest for the stars. Artemis isn’t about bringing the world together in a prodigal return to the moon and onward to Mars -- it’s about future resource control and proving technological superiority, not to mention a nostalgia grab.

While human space exploration remains an astonishing feat, it’s never been a completely apolitical one

That’s not to say that aspiring toward the best in humanity through human endeavors in space is inherently naive or pointless. It doesn’t have to be a conduit for ultra-rich wish fulfillment or political grandstanding. As Shields at the ISS National Lab pointed out, the nearly 20-year-old space station “is an unprecedented platform for international collaboration. You’re talking about truly an incredible effort where you have teammates on the ground and space who know no borders.”

For many Americans, the coronavirus has heightened the stakes and shortened the timelines of future imaginaries. For better or worse, the pandemic hasn’t radically changed the state of American space efforts so much as thrown its priorities -- and politics -- into stark relief. The billionaire-backed companies pursuing moon-mission contracts and space tourism projects were on this path before the pandemic. The fact that their efforts continue full speed ahead as millions face economic ruin and uncertainty says less about the essential nature of space travel and more about the essential nature of capitalism. Just as it was easier to go to the moon in 1969 than to address urban poverty, it seems easier to prioritize going to the moon now than to distribute ventilators to hospitals or ensure universal health care in a pandemic, because going to the moon requires no disruption of bureaucratic inertia or existing power paradigms.

That’s not to say we couldn’t have moon missions alongside an effective and competent pandemic response or wealth redistribution. We do need to be looking and working toward a future beyond this pandemic, and space absolutely should be part of it. But a future of space escapism for the rich and a new cold war based in moon mining wasn’t a particularly inspiring future before the coronavirus, and it’s an utterly tone-deaf future in its wake. Perhaps the question is not whether space is itself essential but what values, principles and politics are essential to bring it — and a post-COVID-19 future — closer to the transcendent and unifying ideals that have come to be associated with space.