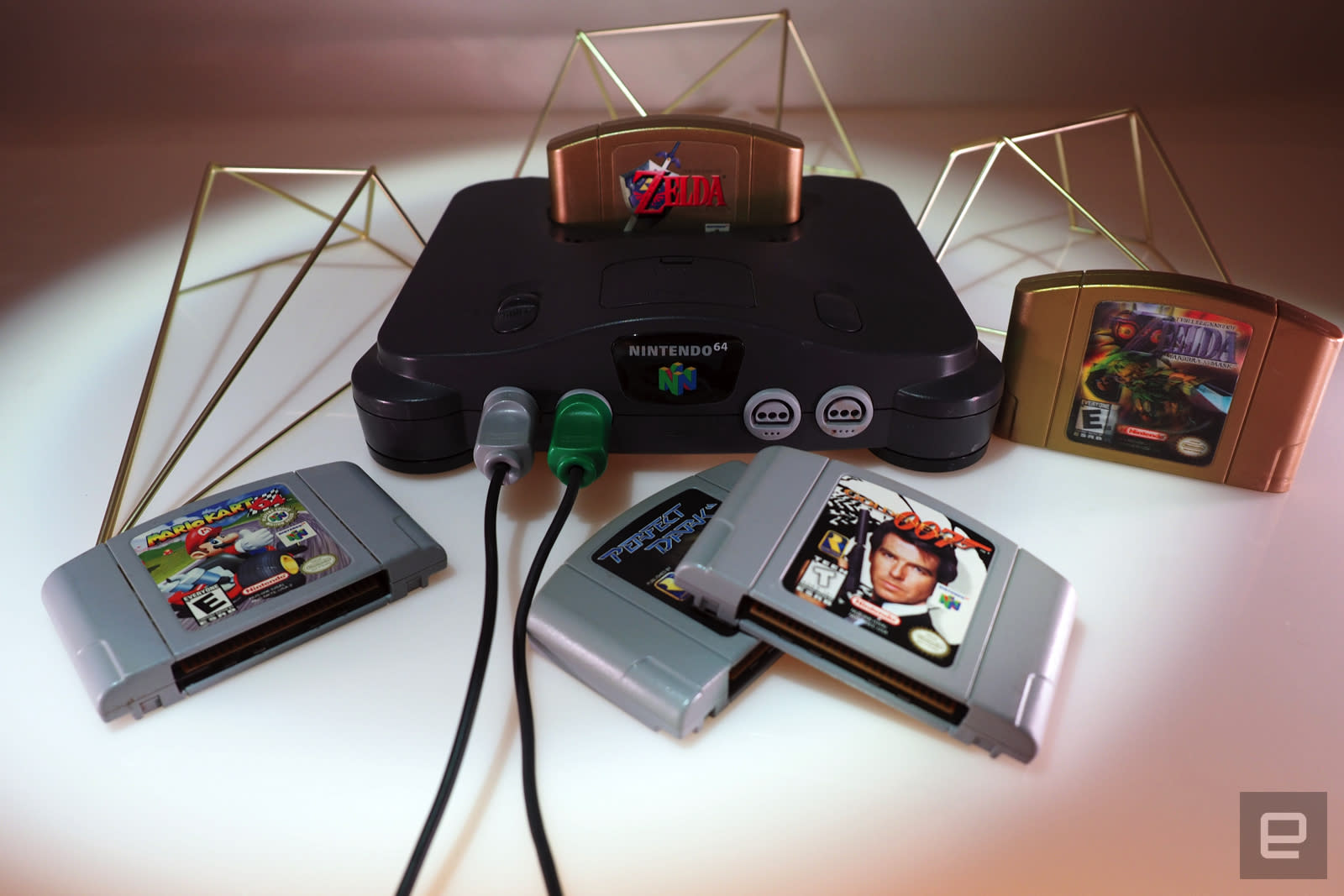 Take a look back at Engadget's favorite Nintendo 64 games

25 years ago today the Nintendo 64 was released in Japan. It was the company’s last cartridge-based home console before the switch to optical discs and it introduced players to the joys of awkwardly-placed joysticks. And of course there were the games: the jump to a 64-bit CPU meant you could now experience the worlds of Hyrule and the Mushroom Kingdom in glorious 3D. However, while Super Mario 64, The Legend of Zelda: Ocarina of Time and GoldenEye 007 might be the go-to titles when talking about the Nintendo 64, the tastes of the Engadget crew run a little more off the beaten path, as evidenced by the memories our staff shared below. — Kris Naudus, Buyer's Guide Editor

If there’s one Nintendo 64 title I wish would make a comeback on the Switch, it’s Diddy Kong Racing. I spent hours of my childhood on this game and, to this day, it’s the one title that gets me to dust off my Jungle Green N64 and sit too close to the TV.

Though Diddy Kong Racing was critically acclaimed for taking the dynamics of Mario Kart 64 and adding in a story, I have almost no memory of the game’s single-player adventure. That’s because the bulk of my time playing was in multiplayer “battle” mode at the houses of friends (whose older siblings had conveniently played through much of the main story and unlocked the levels already).

Back then, I didn’t care about the game’s story or beating the bosses. The best part of Diddy Kong Racing was battling my friends for the most eggs on Fire Mountain, or to be the last one standing in the Icicle Pyramid. And then doing it all over again. As much as we played, it seemed there was always some new diabolical strategy to try.

Like a lot of Nintendo 64 titles, the controls could be a bit challenging to master and the steering was... imprecise. But those constraints were part of the fun, and made it that much more gratifying when you perfectly aimed a rocket or nailed a well-timed drift. Maybe one day I’ll go back and actually play through the story. But even if I never do, I’ll always be up for a quick round on Fire Mountain. — Karissa Bell, Senior Editor

Like many games from the N64 era, I discovered Harvest Moon 64 in the pages of Nintendo Power. The magazine featured screenshots that made me fall in love with the art style, saving up my allowance to buy the game when it came out in the winter of 1999.

I wouldn’t have known at the time, but Harvest Moon 64 was in many ways the pinnacle of the series. Gameplay was simple, but in comparison to some of the more modern entries in the franchise, that was the strength of Harvest Moon 64. It never got bogged down in the more boring farming mechanics of its successors, instead focusing on the social elements that stayed with you long after you finished playing. A ticking clock and seasonal events always meant you had something to do away from your farm, and made it so that multiple playthroughs were essential to see everything the title had to offer.

The isometric presentation did such a great job of selling the charming world of Harvest Moon 64. Ultimately that’s why I kept coming back — there was something comforting about the game that made it the perfect game to play during a sick day or lazy summer afternoon. — Igor Bonifacic, Associate Editor

The Legend of Zelda: Majora’s Mask

We all know The Legend of Zelda: Ocarina of Time is a masterpiece, but I’m here to tell you its sequel, Majora’s Mask, is objectively perfect. Nintendo could have played it safe after releasing one of the most important games of all time, but instead the company created something different. It’s all the ways Majora’s Mask breaks with the Zelda formula that make it so memorable. There’s no princess to save, no Master Sword to recover and, most importantly, you’re not up against Ganon. Then there’s its most controversial element.

A lot has been written about the game’s 72-hour structure in which you’re forced to repeat the same three days again and again as you try to stop the Moon from falling on Clock Town. That cycle is Majora’s Mask's greatest strength.

Pathos permeates almost every story you stumble upon in the game, including that of antagonist Skull Kid. Majora’s Mask invites you to help out the characters you meet throughout your adventure, even though what little good you perform is undone at the end of the current cycle. Even as a kid, I remember being struck by how Majora’s Mask handled choice and consequence in a way that no game I had played before had. At every moment, it reminds you that there’s a cost to doing nothing. — IB

One game my friends and I played often was Perfect Dark. Rare followed up the excellent GoldenEye 007 with an even better first-person shooter. For a 2000 console game, it looks great and plays like a dream. A frantic, action-packed dream.

The multiplayer mode is a precursor to many current shooters. You start each round unarmed, and you need to find weapons — just like many modern battle royale games. There’s a wide array of options for match customization, and it’s always fun to cook up fresh scenarios. I'd always try to make sure there were sentry guns I could deploy to take out my opponents.

Sometimes, we’d frankenstein together two televisions and a signal splitter, turn off the mini map and cover our opponents’ sides of the screen for a real challenge. It was about as close as we could get to a competitive multiplayer experience on a console back then. I only wish I had my own N64, so I could have practiced and not get stomped every time we played. — Kris Holt, Associate Editor

Nintendo loves to keep its fans waiting. It’s been 14 years for Metroid Prime fans, but Star Fox players have had it even worse: we haven't seen a good title in the series since 1997. Yes, there was Star Fox Adventures and Star Fox Zero, but those titles are pale reflections of the glory that was Star Fox 64. I recently played the 3DS version of Star Fox 64, and it is still a great game, but at the time it was mind-blowing. The first Star Fox was innovative, but it strained the Super Nintendo to its limits, and still only managed blocky graphics devoid of texture and detail. Star Fox 64 kept the core gameplay but added detailed environments, hordes of enemies and was the first Nintendo title to feature haptic feedback, courtesy of the Rumble Pack.

The core gameplay loop of “shoot, charge, lock-on, blast, dodge” is still addictive even now. Even the campaign design was innovative. The levels branched depending on your actions in-mission, but this also served as the difficulty level. Do a good job blasting enemies, finding secrets, and saving your squadmates (dammit Falco, get back here!) and the game shunts you towards more challenging missions. On-rail shooters are decidedly old-fashioned, and the space-sim genre in general has seen better days, but until we get word of a new entry in the franchise, I'll still be here with my 3DS port nailing 100 points in Sector Y to unlock the path to Aquas. — Christopher Schodt, Video Producer

I never owned a Nintendo 64, so my memories of it are really of playing games with my friends when we were kids. During most school lunch breaks, we’d go to one of their homes, fire up WWF No Mercy and play a few matches.

After getting to grips with the controls, learning each character's extensive moveset was a blast. The reversal system works well, too. You could never be sure whether you’d connect with a devastating slam or powerbomb.

The rich career mode has multiple paths and branching narratives that depend on the match outcomes. Where No Mercy really shines, though, is in its deep customization. Not only can you fine-tune your own character, you can modify the existing roster in almost any way you choose.

It’s still the best wrestling game to date, though WWF SmackDown: Here Comes The Pain and Fire Pro Wrestling Returns are worthy contenders. The blocky character models with their horribly flat faces may look dated, but you can’t beat that No Mercy physics engine. — KH