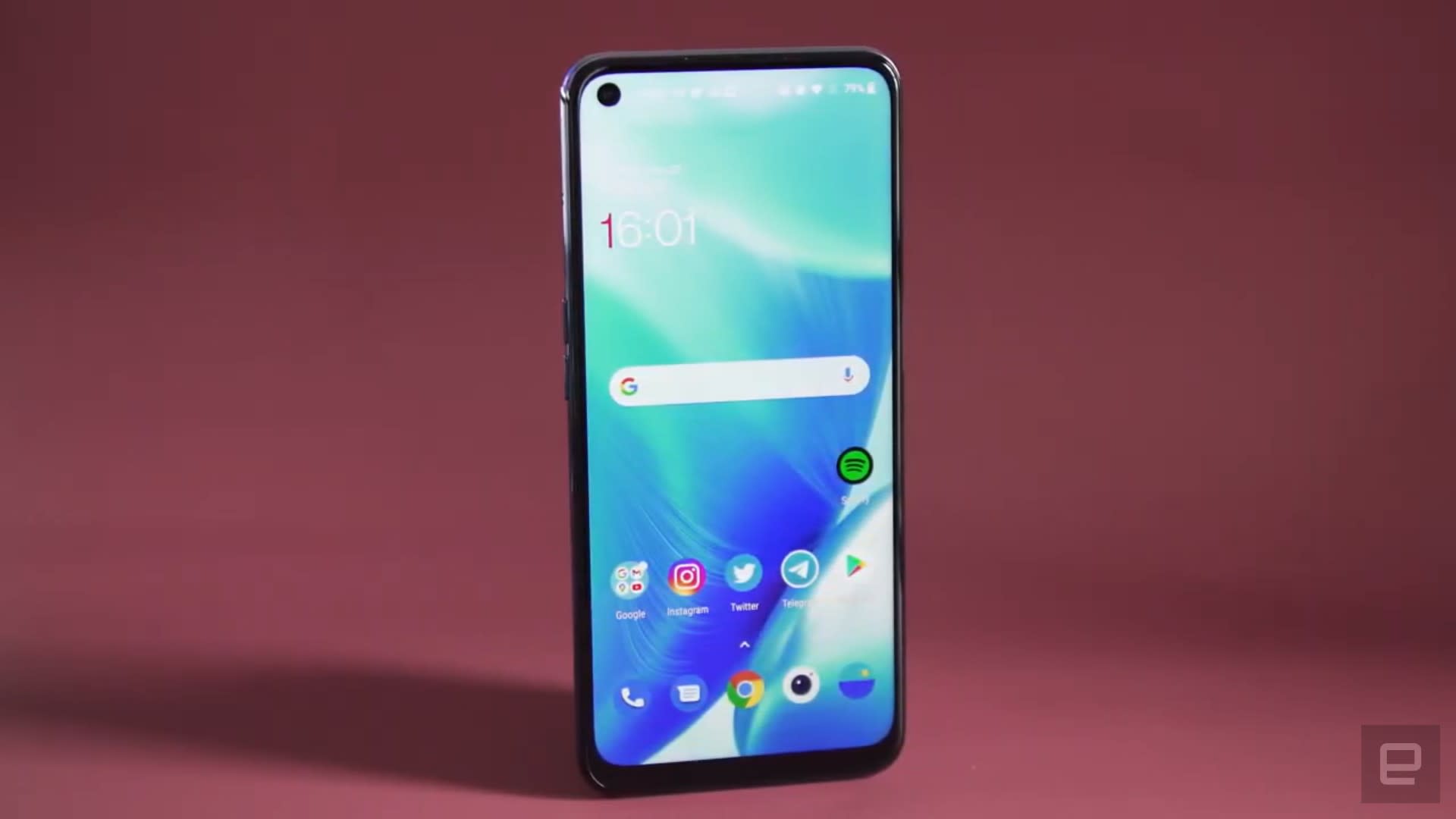 It's also a T-Mobile exclusive.

OnePlus made a name for itself with flagship-level phones at budget-friendly prices. But in recent years, that focus on affordability has been reserved for the company’s newer Nord line. The original Nord was a compelling sub-$500 phone with a fast screen and decent cameras. Subsequent additions to the series were similarly intriguing. The company’s latest is the Nord N200 5G, which offers 5G support and a 90hz screen for just $240. At that price, it seems like a better buy than our current favorite affordable phones: the Pixel 4a and iPhone SE. But many of OnePlus’ promises come with big asterisks and it’s not as good of a deal as it seems.

OnePlus has done a decent job making its Nord line look and feel more expensive than they are. The Nord N200 5G has a dense, sturdy build, a modern all-screen front and a nice matte finish on its plastic back. I also like the subtle, attractive blue gradient on the rear. This phone feels like it should cost hundreds more and it certainly has more flair than the Pixel 4a.

Turn on browser notifications to receive breaking news alerts from Engadget
You can disable notifications at any time in your settings menu.
Not now
OnePlus

Unlike Google’s affordable handset though, the Nord N200 has its fingerprint sensor embedded in the power button along the right edge. I’ve gotten used to placing my finger in the middle of the phone’s rear and hitting the power button to see notifications, so I actually found the placement annoying. Every time I want to see my lock screen, I’d have to use an un-enrolled finger to click the power button to see the time.

Given its larger 6.49-inch screen, it wouldn’t be fair to compare the N200’s weight and dimensions against smaller affordable phones like the Pixel 4a and the iPhone SE (2020). But just so you know, at 189 grams (6.67 ounces) and 8.3mm (0.33 inches) thin, this is a thin but somewhat heavy phone. It’s also rated IPX2 for water resistance so you don’t have to worry about rain ruining your phone. That’s a low splash-proof rating, but it’s still better than the Pixel 4a, which has none.

Another advantage the Nord N200 has over the Pixel 4a, at least on paper, is that its 6.49-inch full HD+ screen refreshes at 90hz. Meanwhile, Google’s phone has a 5.8-inch OLED that runs at a slower 60Hz.

Despite that, I still prefer the 4a’s screen, largely due to the fact that the N200 uses an LCD panel. In general pictures and videos looked fine on the Nord, and scrolling my feeds was indeed smooth. But I missed the colors and contrast levels on an OLED.

The fact that OnePlus was able to include a triple camera system on a $240 phone is a pleasant surprise. The 13-megapixel main sensor is accompanied by a 2-megapixel macro lens and a 2-megapixel monochrome one, which is there to improve artificial bokeh effects. While I can appreciate the usefulness of those cameras in specific situations, I still think a wide angle option would be more helpful to most people.

With the cameras that you do get on the N200 though, you pretty much get what you paid for. All the photos I took looked dull, especially compared to the same shots taken with the Pixel 4a. Nightscapes were blurry and noisy, and OnePlus’ night mode did little to improve quality. The monochrome lens did seem to help, with portrait mode pictures of flowers turning out nicely with accurate bokeh. I tried to snap a cute pup at a dog park with the Nord and they were all blurry.

The front camera is technically better than any of the ones on the rear, thanks to its 16-megapixel Sony IMX sensor and bigger aperture. But OnePlus ruins it with built in face editing software. The result is selfies that are oddly pink and smooth — not in a nice way but in a “did someone smear plasticine all over your face?” way. You can turn this off, but be warned it’s turned on by default, including in video and portrait mode. Frankly, even after I disabled the filter, it still felt like some sort of face tuning was happening, and my selfies looked a bit blurry.

Though the Pixel 4a only offers a single rear camera, it’s still superior to the N200, delivering crisp, colorful pictures even in low light.

One of the biggest reasons the Nord is cheaper than the likes of the Pixel 4a is its Snapdragon 480 processor. It’s on the low end of Qualcomm’s mobile CPU portfolio and certainly not as speedy as the Pixel 4a’s Snapdragon 730G. That, plus Google’s clever software tuning, makes the 4a feel as fast as a flagship phone. Meanwhile, the Nord N200 suffers from lag here and there. Scrolling my apps drawer or shopping on Instagram was smooth, as were my many rounds of League of Legends: Wild Rift. But often the phone stalled when I jumped between the camera and other apps. Snapping too many Portrait mode shots in a row also caused the N200 to hang.

I’d love to blame this entirely on a slow CPU, but there are some small ways in which OnePlus also made its phone feel sluggish. While I love how clean the company’s own OxygenOS 11 is and how similar it is to Pixel UI, certain animations take longer to trigger and make the Nord N200 feel less responsive.

For example, swiping in from the edge of the screen to go back, not only requires dragging your finger a longer distance but also a slight pause before the phone recognizes the action. The N200’s heavy haptic feedback also feels less snappy than on most other Android phones.

OnePlus says the Nord’s battery is “everlasting” and yes, it’s clearly hyperbole, but the N200’s 5,000mAh cell did feel like it lasted forever. It took a whopping 17 hours and 20 minutes to drain the phone on our video rundown test — about 5 hours longer than the Pixel 4a and iPhone SE. It also beat the Galaxy S21, which notched about 15 and a half hours. In daily use, I never felt worried about the N200 running out of juice.

Still, fast charging is a rare feature in phones at this price point, so it’s nice to have. Another bonus is 5G connectivity. Thanks to its Snapdragon 480 CPU’s built-in X51 5G modem, the Nord N200 can theoretically hit up to 2.5Gbps download speeds. But note that this device only supports sub-6 and not mmWave 5G. Since the N200 is exclusive to T-Mobile in the US, this isn’t a huge deal (the carrier isn’t focusing on building out a nationwide mmWave network). But it does add an asterisk to the whole “$240 phone with 5G support” deal.

For less than $250, the Nord N200 offers some impressive specs on paper. Things like a 90hz screen, 5G connectivity, a triple camera system and a 5,000mAh battery are rarities at this price and make the phone seem like a steal. In actuality, though, most of those highlights are better on paper than in real life. Pay $100 more and you’ll get an almost flagship-level phone in the Pixel 4a, which has an excellent camera, great performance and a nice OLED display. It may not refresh as quickly or last as long, but it’ll serve you well. If you can hold off a little longer, you might want to wait till August, when we expect the next of Google’s affordable handsets to be launched. For now, the Nord N200 5G is really only for diehard OnePlus fans who want a 90hz screen in a super long-lasting 5G phone for cheap.