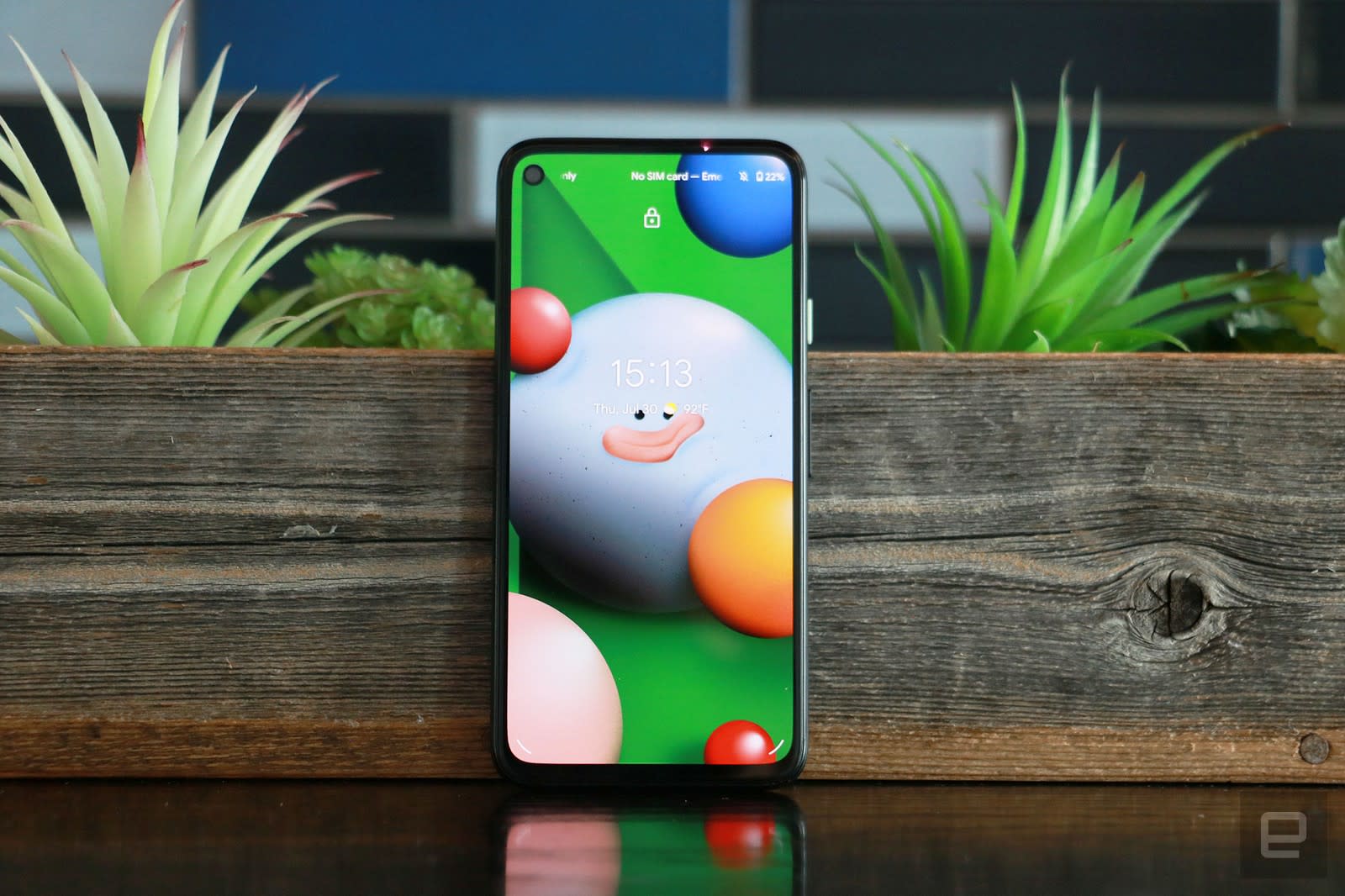 I never thought I’d be a $350-phone type of girl. I’ve always felt like a midrange phone wouldn’t be powerful enough for my daily needs, or have cameras good enough for my Instagram ambitions. I’ve always sought high-end devices with fancy features. But with a recession raging for the foreseeable future, and a sudden glut of impressive midrange phones, I began to reconsider my stance. Now that Google has launched the Pixel 4a (at last) for just $350, I might actually be convinced: the time for midrange phones to reign is nigh.


Back to basic hardware

When I picked up the Pixel 4a, my first thought was “Wait, does this thing have a case on?” The soft-touch coating on the back felt foreign, since I’m used to phones with glossier finishes. It’s not unpleasant though, nor does it feel cheap. In fact, the Pixel 4a is as sturdy and well-made as the Pixel 4. And at 5.04 ounces it’s significantly lighter than the pricier phone (5.71 ounces), which I’ve come to appreciate a lot more as I’ve been spending more time on my couch reading on my phone. 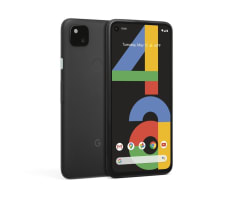 The Pixel has always been a phone that felt a lot nicer than it looked -- it’s not the most stylish. The Pixel 4a’s design is even more basic than ever, though. It comes in Just Black and… that’s it. There are no other sizes available, either. Keeping to one size and color was part of Google’s strategy to reduce production costs. Other midrange phones like the Galaxy A51, the iPhone SE and even the Oneplus Nord (which isn’t available in the US) also come in just one size, after all. The only design flourish you’ll get on the Pixel 4a is the light blue power button on the right side.

I’m not mad about it; I’m all in favor of trimming the fat for a lower price. Plus, Google was able to keep the fingerprint sensor and the headphone jack on the Pixel 4a. Face Unlock never worked reliably for me on the Pixel 4, and now that wearing masks is a part of daily life, fingerprint authentication is far more convenient. A headphone jack continues to be important for people who have yet to switch to wireless earbuds, especially if they’re on a budget. The camera module on the Pixel 4a’s rear is smaller than the 4’s, and I like that the power button and volume rockers feel a bit “clickier.”

I have a bad habit of leaving my phone on the arm of my couch, and all too often I accidentally nudge the device, causing it to crash to the floor. Thankfully, the Pixel 4a has so far survived two such falls without a scratch -- phew! Compare that to the OnePlus Nord, which has eye-catching colors and a glossy finish, sure, but is already showing scratches after a week. And that’s without being dropped.

Turning the Pixel 4a on for the first time was a surprise. I wasn’t expecting to see the 5.8-inch screen take up nearly the whole front of the phone. This is Google’s first time using a display with a hole-punch camera, and makes the 4a the most modern-looking phone in the company’s lineup. Yet, Google is also playing catchup -- the OnePlus Nord and Galaxy A51 both offer similar screens with camera cutouts, that measure 6.4 and 6.5 inches respectively. The iPhone SE still sports a tiny 4.7-inch screen with a design from 2016, though.

Aside from the shape, the Pixel 4a’s full HD+ OLED panel is almost the same as the Pixel 4’s. Both support HDR and are bright enough to see in sunlight. I enjoyed watching episodes of Sense8, and scenes from a Pride parade were vibrant and detailed.

I was surprised when I realized I missed one important Pixel 4 feature: its 90Hz refresh rate. The Pixel 4a only refreshes at 60Hz, which made things like scrolling my Instagram or Twitter feeds look slightly sluggish. If you’ve never laid eyes on a 90Hz screen, you won’t miss it. But if you’re considering switching, this will take some adjusting. The Pixel 4a isn’t alone, though. While the OnePlus Nord does offer a faster 90Hz screen, the A51 and iPhone SE are both stuck at 60Hz. And again, you can’t get the Nord in the US anyway.

For the price, though, this is a minor sacrifice. My bigger complaint is about the Pixel 4a’s bottom-firing speakers. It was too easy to block them when I was grabbing the phone in landscape mode, which ended up muffling and distorting the audio. When they weren’t covered, the speakers delivered satisfyingly clear music -- Lauv and Julia Michaels’ There’s No Way sounded crisp, though it could have been a little louder and bassier.

Flagship cameras for a fraction of the price

One major thing that tends to suffer when companies try to cut prices is the camera. Yet, Google bucked that trend with the Pixel 3a’s fantastic camera and the 4a is no different. Throughout my testing, I played a game with my colleague Chris Velazco: Which phone took this photo -- the 4a or 4? He was only right about 50 percent of the time. It’s not a huge surprise, considering they both have the same sensor and use similar processing software. But when you consider that the Pixel 4 costs $799 (though it frequently goes on sale for $450), it’s impressive that the $350 Pixel 4a can match it, even if the 4 is a year-old flagship.

I shot flowers, buildings, nightscapes, city skylines and drool-worthy homemade dumplings, and every snap came out crisp and colorful. The pictures the 4a captured of a beautiful purple-gold sunset were almost indistinguishable from those I took on the Pixel 4. In some situations, like with the dumplings, the Pixel 4a produced a slightly green tint, but it wasn’t obvious until I lined the photos up side by side.

The fact that the Pixel 4a only has a single rear camera puts it at a disadvantage. Both the OnePlus Nord and the Galaxy A51 have quad-sensor arrays, though the iPhone SE also sports just the one camera. Google still delivers superior image quality thanks to its clever software, but I miss the flexibility of switching a wide-angle lens for more-arresting landscapes.

The 4a has the same selfie camera situation as the 4 and as expected, took portraits of similar quality. I miss the secondary wide angle lens that the Pixel 3 offered, but the solo sensor on the 4a isn’t bad. Put it this way -- with a wider angle I could get shots of my head-to-toe look, while the 4a can only get head-to-knees. It’s not the biggest deal given we’re not all clamoring to squeeze into group selfies these days, but if self portraits are a priority you might prefer the Nord’s dual front cameras.

In use and Live Caption for calls

One of my favorite things about the Pixel 3a was how well it performed despite using a less-powerful processor. Google cooked up some software magic to make Android fly despite the slower CPU, and did the same with the Pixel 4a. It packs a Snapdragon 730G instead of the Pixel 4’s Snapdragon 855. But both have 6GB of RAM and feel similarly speedy. The Pixel 4a runs Android 10, which isn’t a surprise considering Android 11 is still in public beta.

I jumped from using Amazon’s AR tool to see how various bookshelves would look in my apartment, to having video meetings, to chatting with my friends while watching YouTube videos in picture-in-picture mode and playing too much The Sims Mobile with no delay. The phone rarely even hesitated.

Google’s software tends to make up for its basic hardware, and as usual, the company has some helpful tools that make the Pixel experience better than any other Android phone. Most of these have already been announced, like its personal safety and car crash detection feature, Google Docs integration for the Recorder app, as well as adaptive battery management.

With the Pixel 4a, though, Google is bringing its Live Caption feature to calls. Previously, Live Caption offered onscreen subtitles for all audio playing on your Pixel, except calls. Those are a trickier domain. Since captions can be captured in a screenshot, that would be akin to recording a conversation, which brings up issues of consent.

To work around that, Live Caption for Calls will alert your contact that you’re using the feature when you turn it on. I tested it on several apps, and each time Google’s generic robotic-sounding voice told the person on the other end “Hi, the person you’re about to speak with has call captions turned on. They’ll see captions of what you say to help them listen along.” I was also shown this message on my screen.

That Telegram thing, by the way, was a distinct echo and feedback on my caller's end. The distortion went away over cellular and in other apps like Facebook Messenger and Duo. Live Caption was also more accurate on the latter three, probably due to the better audio. It was surprisingly still able to hear and transcribe calls even when there was loud (fake) crowd noise in the background. And even when there were mistakes in the subtitles I was able to figure out what was being said through context.

I firmly believe that Live Caption needs to be on every phone (and laptop). Not only is it an important accessibility feature for people who are hard of hearing or deaf, but it could even be useful in a noisy cafe or a subway station (you know, if we ever venture outside again). For now, though, features like Live Caption, Call Screening, Recorder and Personal Safety are what set the Pixel 4a apart from the competition.

One area Google tends to fall short of the competition is battery life, but the Pixel 4a has surprised me on that front. Despite packing a relatively small 3,140 mAh cell, the Pixel 4a lasted 12 hours and 26 minutes on our video rundown test. That’s just shy of the Nord’s nearly 13-hour mark, which has a 4,115 mAh battery.

In real world use, the Pixel 4a easily made it a day and a half. But the Galaxy A51 and its 4,000 mAh battery barely made it a day and the iPhone SE couldn’t even manage that. Once again, Google has shown that clever software tweaks can make up for lesser hardware.

I’ve honestly never been this impressed by a midrange phone. Despite a lack of style and the single rear camera, the Pixel 4a is the only sub-$500 phone I’d consider switching to. Plus, at $350, it’s cheaper than the iPhone SE, the Galaxy A51 and the OnePlus Nord, which all cost about $400. While the Nord might have nicer color options, a faster screen and a more versatile multi-camera setup, it’s not available in the US.

Google’s software prowess makes its camera shine, helps its battery last longer and delivers unique features like Live Caption and on-device Recorder transcription. Best of all, it makes the Pixel 4a feel like a flagship at less than half the price.