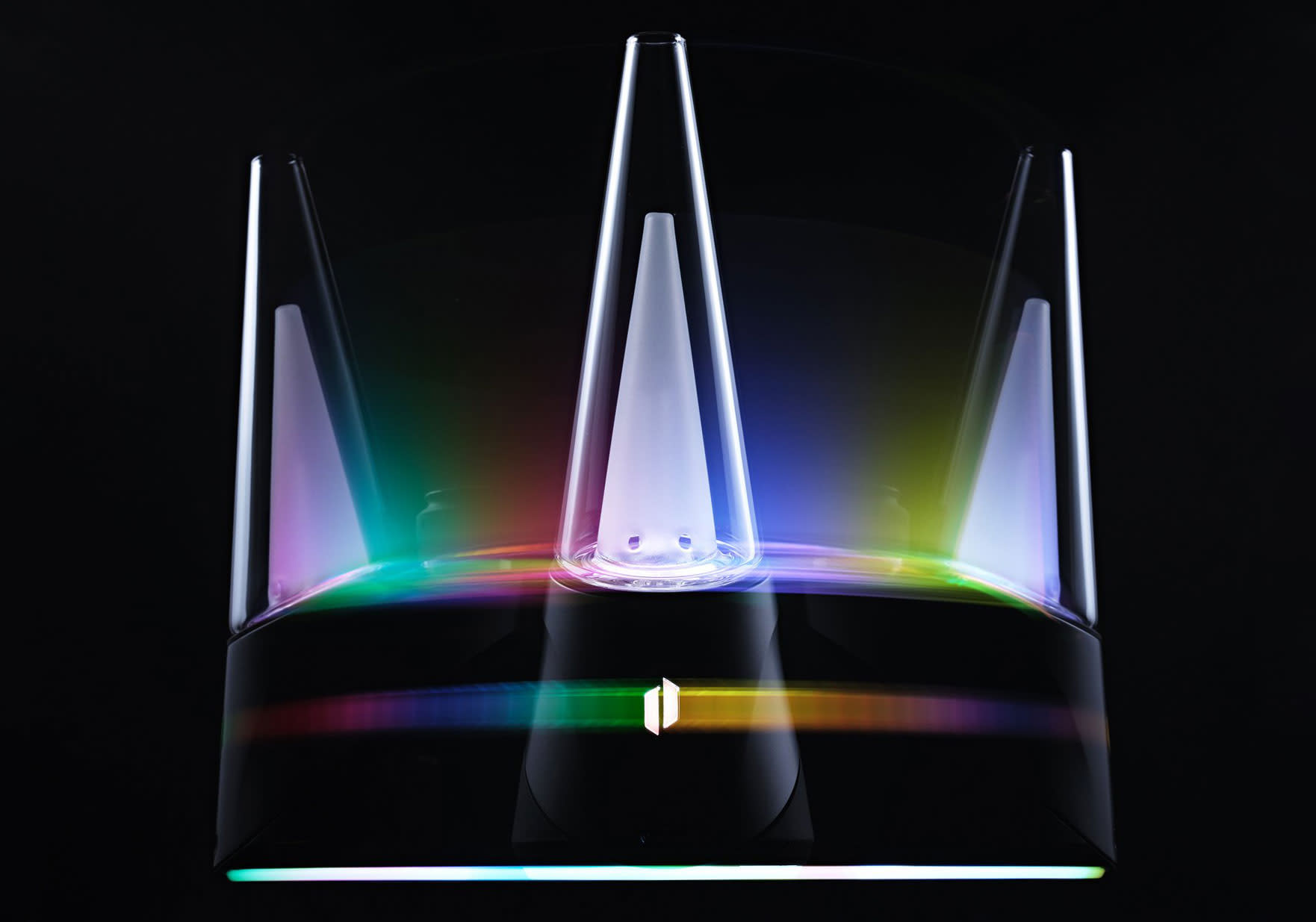 It's everything we loved about the OG Peak vaporizer with less of what we didn't.

When the original Puffco Peak desktop concentrate vape made its debut at CES 2018, I was excited to say the least (the very least). Up until that point smoking or vaporizing concentrates -- more commonly known as dabbing -- required an outsized effort to consume. Conventional dab rigs contain more glass piping and tubes than the Still from M*A*S*H, plus they often require the use of a propane torch. Either that or you were stuck trying to spoon-pour teensy amounts of hash oil into a dab pen roughly the size of an English cucumber. The Peak promised to change that experience for the better with a smoother, cleaner, and less sticky dabbing experience.

Unfortunately, some aspects of the OG Peak’s construction quality and design turned out to be problematic in the long run. For example, the glass carb caps designed to gently rest on the top of the heating chamber would break if you so much as looked at them rudely. I broke three during the review period -- one of which managed to shatter itself on carpet. Additionally, the way the water chamber was angled drastically reduced the amount of liquid you could actually fill it with. Add too little and you were taking ambient air hash hits with nothing to cool the vapor, add too much and you were taking drinks from the chamber with every draw.

And don’t even get me started on the Peak’s battery woes. The powercell on the first review unit I had conked out after barely half a year. One day it just decided that it had enough of the whole “able to hold an electrical charge” charade and refused to continue doing so.

“If you’re one of the first to buy it, you’re going to be one of the first to experience issues,” Puffco CEO Roger Volodarsky told Leafly in 2018. But over the past two years, Puffco has been working hard to rectify the faults found in the OG Peak, as the much improved Puffco Peak Pro can attest.

Let’s start with the Peak Pro’s crucible -- that’s the ceramic bowl where you put the concentrate and upon which the carb cap sits. Compared to the original Peak, the Pro’s bowl is 40 percent larger and can handle all the concentrate varieties that its predecessor could. It’s also smarter thanks to the incorporation of a dedicated microprocessor that continually monitors the temperature inside the crucible and adjusts the unit’s heating element to maintain a precise, real-time temperature range regardless of how much hash you pack in there or how hard you draw air through it. With the original Peak, overfilling the bowl or sucking too deeply could overwhelm the heating element, leading to thinner, less satisfying rips.

Unfortunately, cleaning the crucible now is still just as much of a pain in the ass as it was with the OG Peak -- it involves Q-Tips and rubbing alcohol and trying to remember “lefty-loosey, righty-tighty” when you're stoned out of your gourd, it’s still a whole thing. I don’t recommend it. [Update: Puffco points out that you can safely dunk the whole unit in ISO if you don’t want to swab.]

The glass water chamber has been significantly redesigned as well. It sits taller and more vertically on the electronic base, effectively doubling the amount of liquid it can hold while drastically reducing the amount that gets in your mouth. Interestingly, the Peak Pro accommodates any glassware that worked with the original Peak. They’ll of course have the same water-filling issues on the new base as they did on the old but for folks who maybe threw down a couple of hundred bucks for a custom chamber, it’s nice to see that their investments aren’t for naught just because the device got an update.

The carb cap has also seen significant improvement. Where the first iteration was little more than a glass spindle with a wide brim that sat daintily atop the bowl, the new version is clad in rubberized armor and fits snugly into the bowl’s rim. There’s even a strap available that will physically tether the cap to the Peak Pro. And to minimize the need to pull the carb off every few tokes to see how well the concentrate is bubbling, the new carb cap has a clear viewport to give you a rough idea of what’s going on in there.

The base is new both inside and out. Its exterior has been redone with more durable finishes and a more ergonomic grip. It was always tough to get a comfortable hold of the original Peak. The device felt just a touch too small for my hands. But the new Peak Pro molds to my palms like a Playstation controller -- it just fits. Puffco has also revamped the Peak’s power management systems, putting in a 1700 mAh battery into the base. That’s beefy enough to handle more than two dozen bowl packings before needing an approximately 2-hour recharge through the Pro’s integrated USB-C charging port. The Pro now also includes a helpful auto-sleep feature that will preserve the Pro’s battery even if you forget to turn it off yourself.

What I was not expecting when I opened the Peak Pro box was the Puffco Power Dock. This dual-purpose base station and wireless Qi charger acts as a mobile external battery for both the Peak Pro and the rest of your electronic devices. The dock will charge the Pro wirelessly (you can also plug the Peak Pro into the dock wired for a faster charge), but everything else will have to be connected via USB-A. Like the Peak Pro, the dock itself is charged using a USB-C port but the output socket uses the older but far more common USB variety. I would have loved to see Puffco include a USB-A to USB-C adapter so I could charge my Pixel 2 with it but you can pick up a perfectly good adapter from Amazon for less than $10. The dock houses a 6,000 mAh battery, which is enough to fully, wirelessly recharge the Pro as well as help bring your dead phone back from its unpowered grave.

I’m not a fan of gadgets needing smartphone apps -- I mean Hue lights and Ring cameras, I understand, I just don’t know if my vaporizer really needs one. The Puffco app is perfectly helpful, mind you. The home screen lists your Peak’s nickname, the battery remaining, the active temperature profile and color scheme, the current bowl temperature, as well as your daily and lifetime dab totals. Flip over to the heat profiles tab and you can pick from one of four “active” profiles or delve into the archive section which holds dozens of customized heat settings.

In each custom profile, you can dictate the temperature, duration and color displayed while the unit is on. I generally found myself using one of the preloaded settings throughout the testing but if you’re really into concentrates and want to customize each session to the specific variety of hash you have on hand, that’s totally doable. The archive can hold dozens of custom entries, though you will have to load it into the four-profile Active section for it to work.

And if the rubberized pedestal wasn’t enough of a hint that the Peak Pro is built to be the centerpiece of a session, the app also offers a trio of light patterns -- pulse, wave, and disco. It’s no Winamp visualizer but the patterns are entertaining enough while you’re busy melting into the couch. There’s also a stealth mode which turns off all the lighting that I find, quite frankly, confusing as hell. Like, unless you planned to sneak this thing into a movie theater (ah the good old days of 2019) and get silly during a screening of Tenet what’s even the point?

Overall, the $400 Peak Pro feels, looks, and works in the way that I had hoped the original Peak would. While the OG Peak was and is certainly a novel and groundbreaking cannabis consumption device, looking back it never really shook the “prototype-y” vibes I got on the Pepcom show floor. The Peak Pro is far more polished, better engineered, and feels like a finished product. If you want to try a Pro for yourself, pre-orders began at the beginning of the month and shipments should start being delivered later this week.

All products recommended by Engadget are selected by our editorial team, independent of our parent company. Some of our stories include affiliate links. If you buy something through one of these links, we may earn an affiliate commission. All prices are correct at the time of publishing.
View All Comments
Puffco Peak Pro: A more refined stoner experience