Quibi raised $1.75 billion for so-so shows trapped on your phone.

Nobody asked for Quibi. Nobody, that is, except for Jeffrey Katzenberg, the founder of Dreamworks Pictures and famed Hollywood producer. Where other mobile video startups failed, like Samsung’s long-forgotten Milk Video and Verizon's own Go90 (RIP), Katzenberg figured he could succeed by pouring money (somehow he’s raised $1.75 billion so far!) into top talent and well produced shows. At CES in January, Quibi also revealed its core innovation, Turnstyle, which allows you to seamlessly switch between portrait and landscape video playback modes.

I was intrigued by that technology at the time. The company's chief product officer, Tom Conrad, the former CTO of Pandora and Snapchat product VP, also seemed excited about its potential. Still, it was hard to truly judge Quibi until I got a look at some of its shows. And after spending a few days with the app, which launches today, I can't say I'm impressed. Sure, Katzenberg and crew managed to bring some professional-looking "quick bites" of entertainment to phones, but the shows I’ve seen aren’t nearly as compelling as anything on Netflix or Hulu. And their slick production values makes it harder to connect with Quibi shows than your favorite YouTube personality.

Why, exactly, would anyone want to pay $5 a month (it’s also launching with a 90-day free trial) for this stuff -- especially when you still have to deal with ads and can't even watch it on other screens? Quibi CEO Meg Whitman had an answer for me at CES, though it’s not entirely convincing: "We think we're a third category of this on-the-go viewing opportunity that people will make room for in their entertainment budget, because it's going to be great content for a mobile use-case." 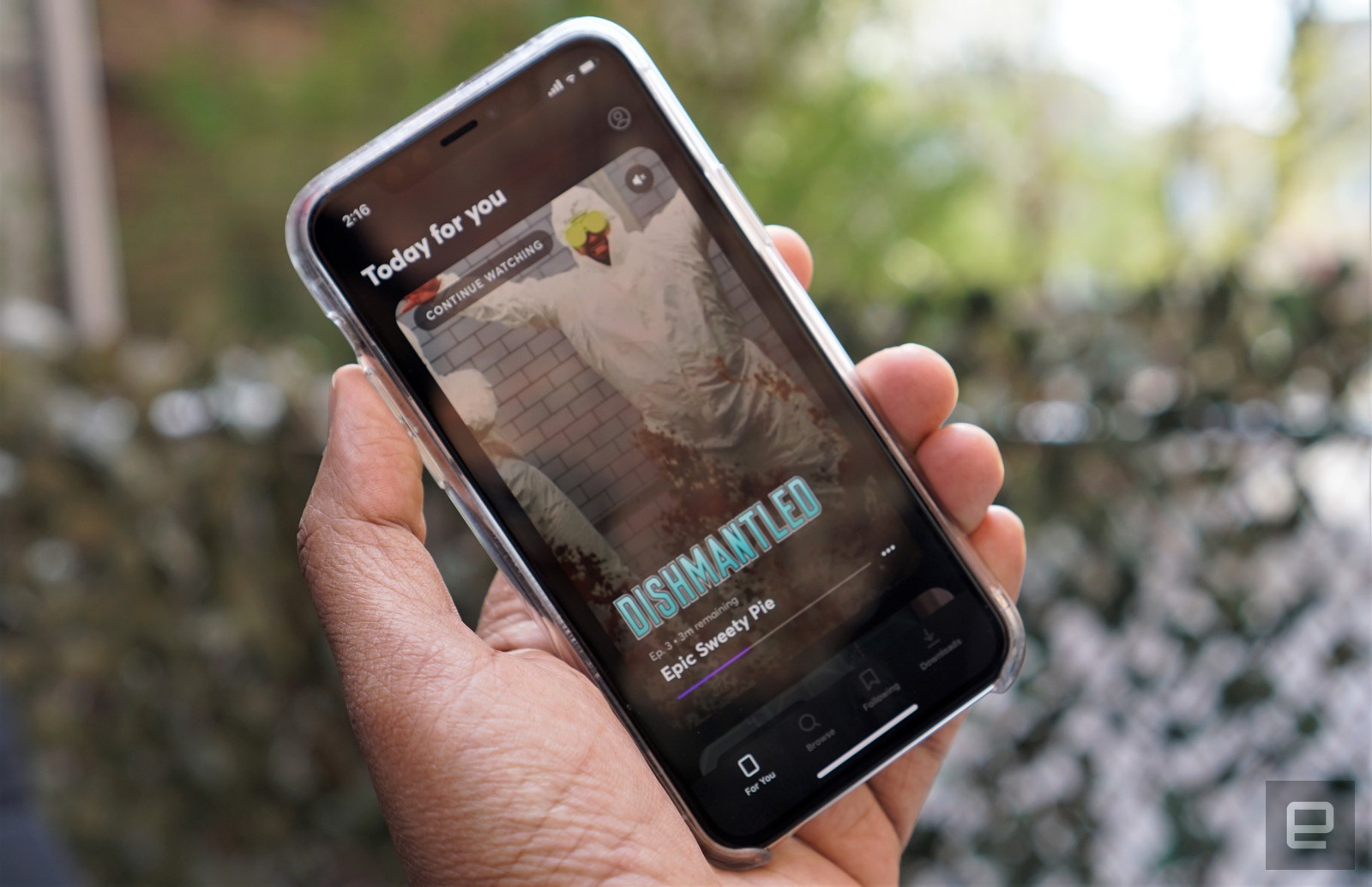 But that logic is difficult to follow after watching several episodes of Dishmantled, a cooking show hosted by Titus Burgess that's part hyper-accelerated Chopped, part voyeuristically punishing Japanese gameshow. In every 5 minute episode, chefs are blindfolded and assaulted by an exploding mystery dish. Their goal: To eat the disgusting remnants from the floor and walls to figure out what that dish actually is, and cook it within 30 minutes. It feels more like a parody cooking show from 30 Rock, than something on a legitimate network.

Don't get me wrong, it’s entertaining in a trashy TV way, so I'm sure it'll find some fans. But five minutes isn't enough time to build the drama you'd find in an episode of Chopped or Top Chef. Every contestant looks like they've been pulled right out of a cooking line, and every celebrity guest seems a bit drunk and confused. The entire endeavor, much like Quibi itself, feels like a complete waste of time and resources while we're facing a worldwide global pandemic. In an era where people are losing their jobs and stuck waiting in long grocery store lines, all the while avoiding an invisible threat just to feed their families, literally blowing up food seems unconscionable.

I also didn't find much value flipping between portrait and landscape modes. Quibi's Turnstyle tech works as advertised -- it effortlessly moves between those orientations without stopping the show -- but it also didn't solve any dire problems for me. Maybe it would be a bigger deal if I were stuck in a crowded bus or train, but in our no-commuting reality, I found myself relying on the traditional widescreen viewing mode. Everything in portrait just seemed too tall, cramped and disorienting. Vertical video works well for amateur footage, since we're used to seeing our friends in video chats, but for highly produced content it just looks wrong. But maybe I'm just showing my age (and my love for traditional widescreen video).

Turnstyle can also be used for interactivity by letting you choose between two angles — though that capability isn’t available in any shows at launch. At CES, I watched a brief clip from Quibi’s upcoming show Wireless, where I was able to swap between looking at the main character in landscape mode, and a full view of his phone by flipping to portrait. It’s potentially cool functionality that reminds me of the multi-angle special features we used to see on DVDs, but it’s unclear if Quibi creators will use it much.

Quibi's biggest flaw at the moment is that none of its content stands out from the wealth of media already available to us. Chrissy's Court is a fun riff on daytime TV court shows, but the actual cases and resolutions feel even more pointless and inconsequential than you’d expect for the genre. (And of course, John Legend shows up once in a while to flash that EGOT smile.) Most Dangerous Game, one of the service’s “Movies in Chapters,” is a remake of the classic human-hunting story — except this time it stars Liam Hemsworth and an appropriately scenery-chewing Christoph Waltz. It's reasonably compelling, but whatever dramatic tension it builds up is destroyed by every clip's short runtime. Thanks A Million is a show where celebrities give away $100,000 to people who've had a positive impact on their lives, but it comes across as more cringeworthy than heartwarming.

There are also a handful of documentaries and daily news shorts via outlets like the BBC, Telemundo and TMZ, but again none of them were exactly “must watch” entertainment. You’ll easily find similar news briefs on YouTube and podcasts. Quibi also plans to launch with 50 shows and aims to have 175 by the end of the year. There’s some notable content to look forward to from the likes of Steven Spielberg and Guillermo del Toro. But frankly, after testing the service for a bit, I’m not excited to see some of my favorite filmmakers make content that’ll be trapped on tiny phone screens and quickly forgotten. 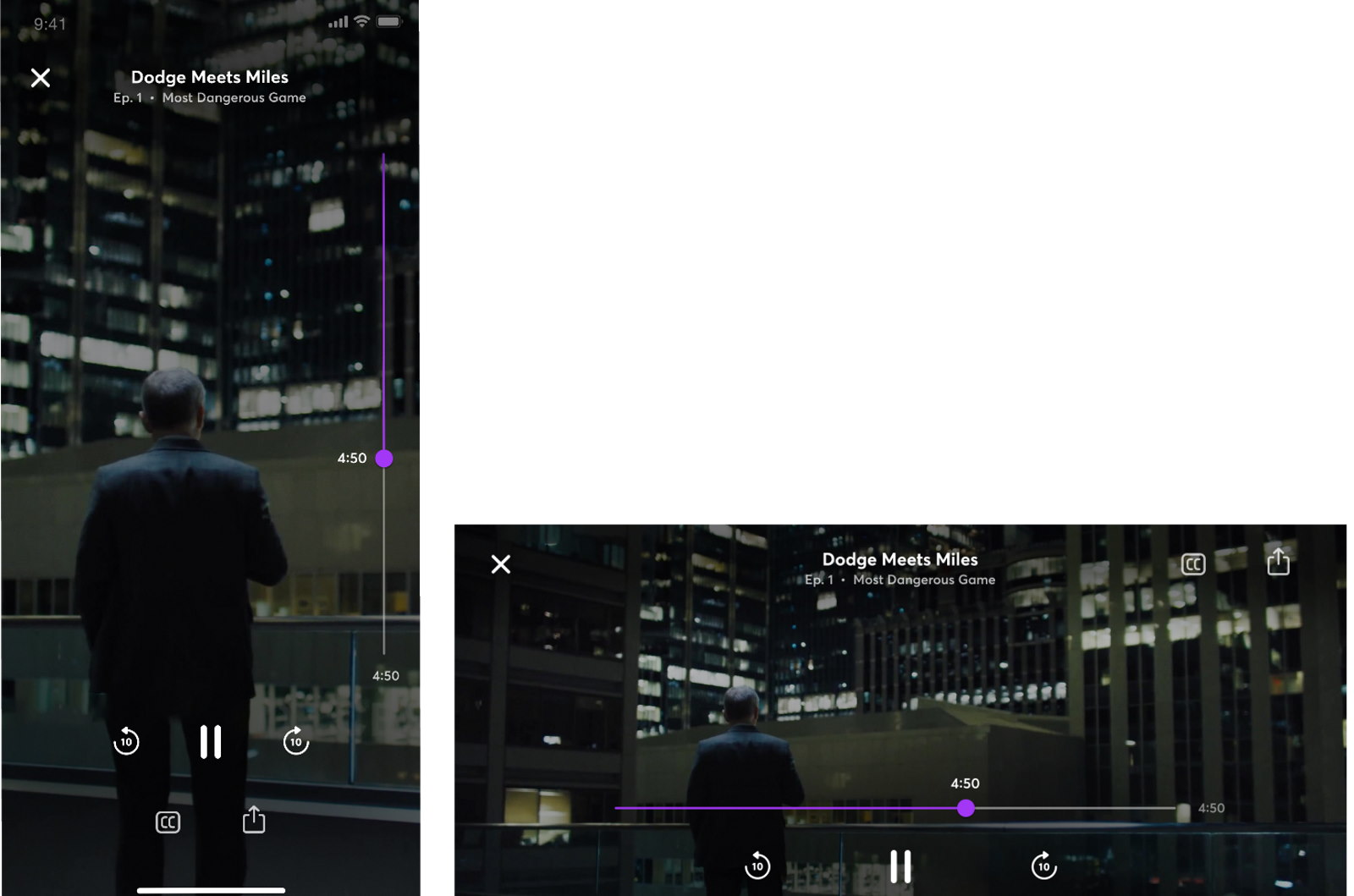 To make things worse, since Quibi's shows are only viewable on mobile, you can't easily use your phone to do anything else while watching them. Live-tweeting with your friends is a bit tough when you have to constantly shuffle between different apps. I was surprised to find that I couldn't even AirPlay Quibi shows to my Apple TV (even by mirroring my phone), and there's no Chromecast support either. That made it tough for me to share the insanity of Dishmantled with my wife -- we were forced to crowd around my iPhone 11 Pro, while my 55-inch TV sat idle in front of us. This doesn't feel like the future of content at all. (And if it is, I want no part of it.)

And then there are the ads. Quibi says it'll only deliver a few minutes worth of commercials every hour with its $5 subscription, but you'll see them often since every episode is so short. Ads even pop up when you try to download a show for offline viewing, which feels like they’re just nickel and diming you. At one point, I sat through a 15 second ad to watch an episode of Dishmantled, and then another 10 second ad played when I tried to download that same episode. It certainly feels odd to be paying for the privilege of watching commercials (and yes, I know Hulu does the same thing). You can forgo ads entirely with the $8 monthly subscription, but at that point you might as well just pay a dollar more for something more robust, like Netflix.

Quibi is the worst sort of over-funded, faux-innovative startup. It pretends to be changing the media industry, but it’s not actually solving any real issues for consumers, or the landscape as a whole. What it comes down to, really, is that nobody needs Quibi -- not in the way you may need your daily YouTube or Netflix fix. And it could just be that nobody really wants a dedicated mobile video service.

We may stare at our phones all day, but we also hop between devices and rely on multiple screens so we can bingewatch and chat with friends at the same time. We’re used to media adapting to us, and nobody wants to be forced to watch middling content on the smallest screen they have.

All products recommended by Engadget are selected by our editorial team, independent of our parent company. Some of our stories include affiliate links. If you buy something through one of these links, we may earn an affiliate commission. All prices are correct at the time of publishing.
View All Comments
Quit trying to make Quibi happen