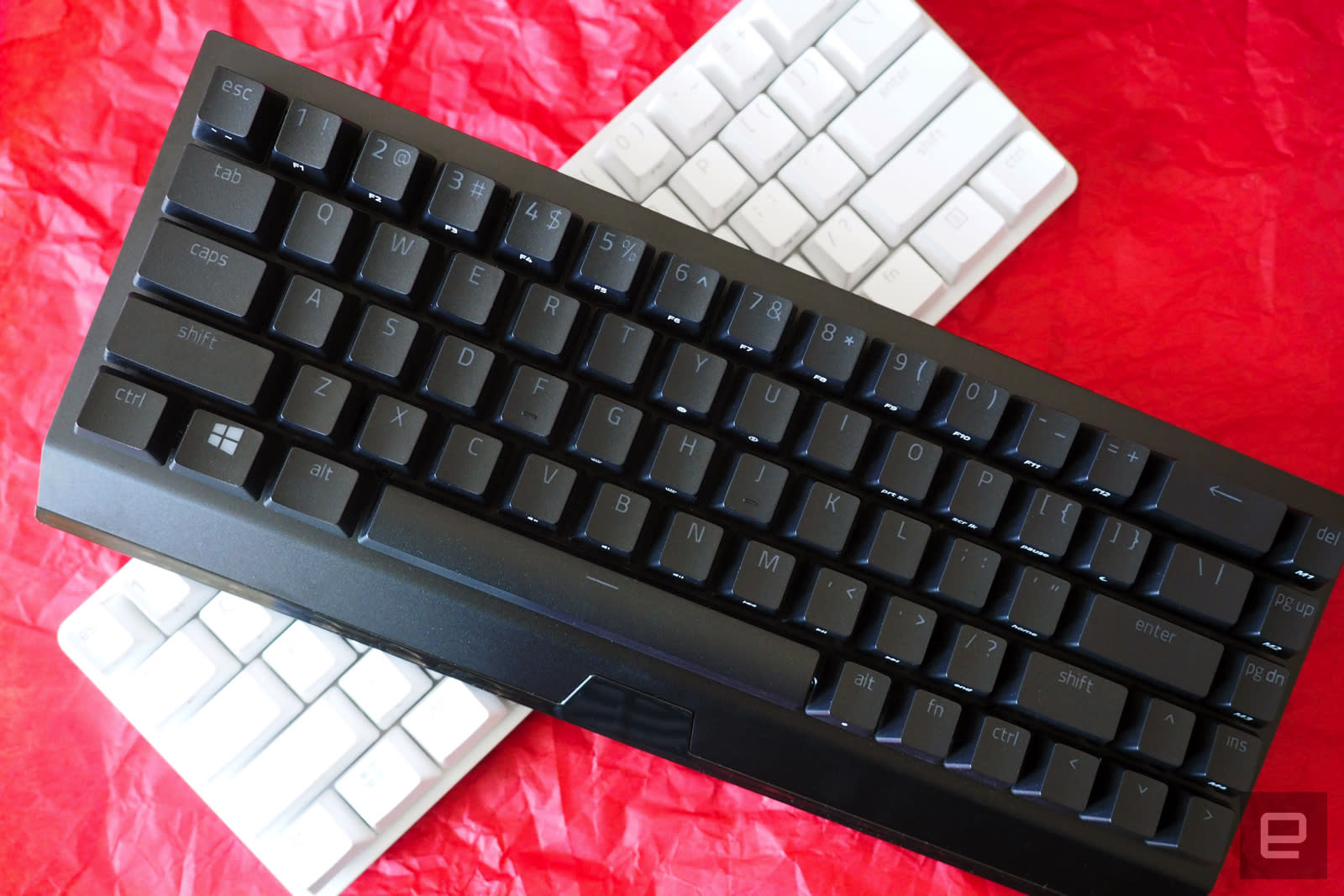 It's cute, but there are a few kinks to work out.

With everyone working and gaming in cramped spaces, the trend in keyboards has been to make them more compact. Major brands like Corsair, HyperX and Razer have released 60-percent keyboards, decks which eschew function and arrow keys as well as the number pad to take up less space on your desk. But with a smaller profile comes inconvenience for those who rely heavily on the arrow keys, with users now forced to learn various hotkeys to move their cursor or character around. Razer has heard those complaints and in response created the BlackWidow V3 Mini Hyperspeed, a $180 65-percent keyboard that packs a few of the missing keys while still maintaining a slim profile.

What does 65 percent mean, exactly? There’s still no number pad on the right side, and no function keys at the top. To use F1 - F12 you’ll need to hit the function key at the bottom right before tapping one of the buttons on the top row to access any macros tucked away under those controls. The big difference between this model and 60-percent keyboards is on the right side of the deck, with a singular column of keys lined up on the right. That’s delete, page up, page down, insert and right arrow. Room for the remaining three arrow switches was created by reducing the size of the shift, alt, function and control keys to a normal keycap width. If you find them too small, there’s still regular sized versions on the left side of the board.

The BlackWidow V3 Mini Hyperspeed isn’t completely streamlined, however. Like the other models in the BlackWidow line, it has a small inch-wide lip on the user-facing end. It isn’t big enough to serve as a wrist rest and, while it could possibly be there for stability, other decks are plenty sturdy without one. It just feels extraneous and bulky on a keyboard where everything else has been designed to be as sleek as possible.

That includes the wireless dongle, which is tucked away on the underside. It’s tiny — smaller than even Logitech’s Unifying Receiver, which is about the size of my thumbnail. Even its compartment is small and easily missed at a glance, so I spent a few minutes shaking out the box looking for the adapter before I noticed the small rectangular profile on the bottom of the keyboard.

Size isn’t the only idea that Razer’s dongle has in common with Logitech’s offering. The same USB adapter can also be used with the company’s Orochi V2 mouse, freeing up a port on your machine. Bluetooth is also available, for those times when you don’t want to pull out the 2.4G receiver, or don’t have a USB-A to USB-C adapter on hand.

Yes, once again, this is a gaming accessory that sticks with USB-A ports in a world where more and more machines are switching to the smaller Type-C standard. It made sense when most gamers were using big tower rigs studded with ports, but with more people and companies scaling down their machines, a USB-C option would have been nice. Especially when you consider that a lot of wireless receivers never quite work right when plugged into a hub and must be inserted directly into a laptop that might only have two ports and one of those is needed for power.

The wireless connections are all, at least, rock-solid, as is the typing experience. The BlackWidow V3 Mini Hyperspeed is available in two of Razer’s proprietary switches: yellow, which is linear and silent, and green, which is tactile and clicky. I opted for the former and I can confirm it’s not too noisy, though if you were looking for something truly quiet you need to opt for a full-sized stealth model. I’ve been using a Huntsman Mini prior to this, which uses Razer’s opto-mechanical switches. The feel of those is slightly softer and quieter than those on the BlackWidow V3 Mini, which I personally prefer to the BlackWidow’s crisper and louder feel. Your mileage may vary, of course.

Overall, the BlackWidow V3 Mini Hyperspeed is a good keyboard. I like the compactness of 60-percent keyboards but am often stymied by the lack of dedicated arrow keys, especially when I’m editing text. And with more games using the arrow keys instead of the WASD array, gamers who opt for a diminutive keyboard would be at a disadvantage. A 65-percent layout keeps the essentials while still maintaining a diminutive profile. I’m just not the biggest fan of this current implementation.