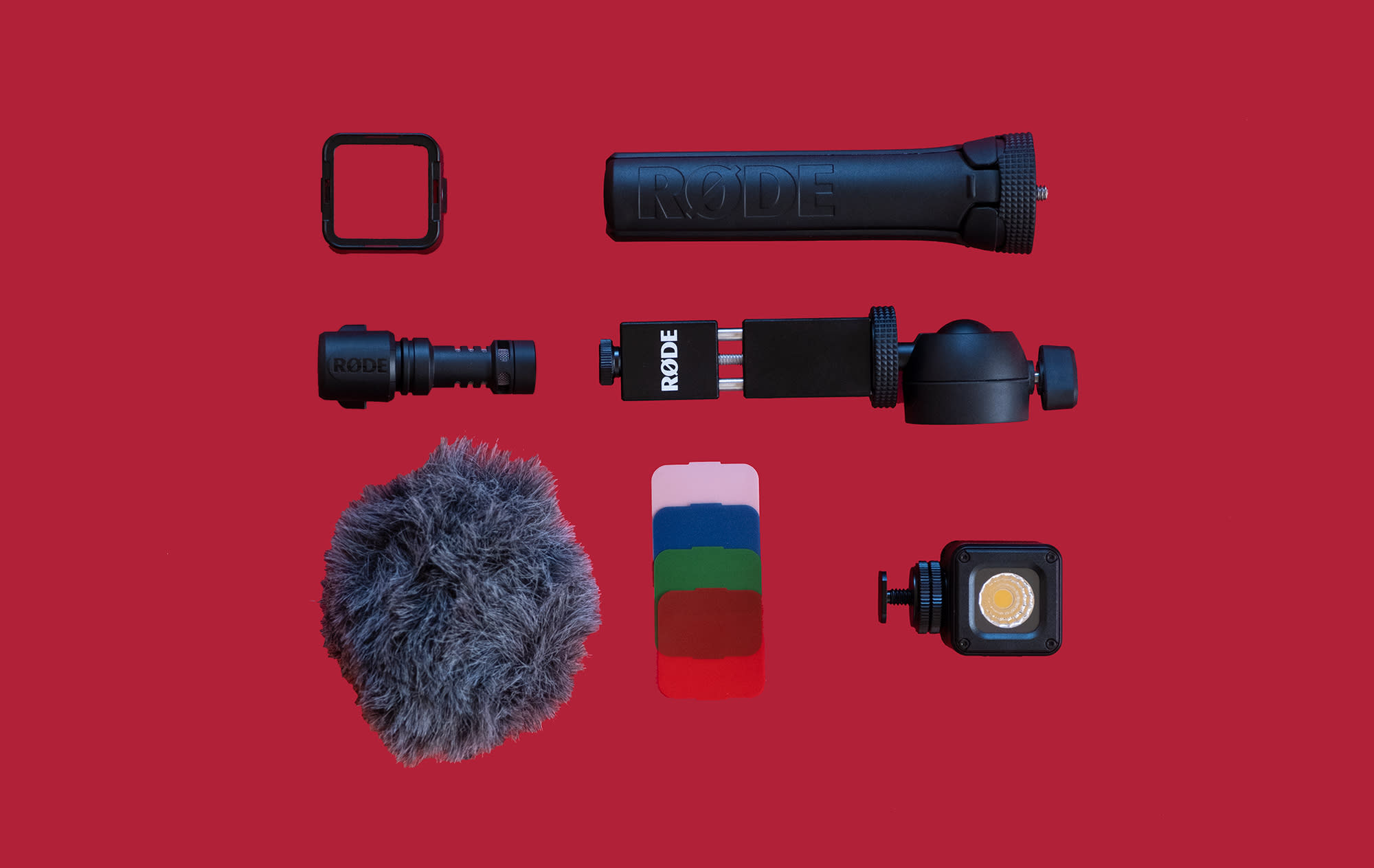 It's more than just a microphone.

This last year or so, you might have found yourself with a little more time on your hands. What better motivation to start that fitness vlog (or self-isolation misery diary)? Of course, your phone already has everything you need to get going, but it’s 2021, and the internet demands a certain level of quality if you want anyone to actually watch or listen. Rode, a mainstay in the microphone game for decades, knows this and has recently unveiled its Vlogger Kit to help you on your way. I also think this can be of interest for those that like to Podcast on the go, which I’ll get to later.

The kit comes in three versions: Android (USB-C), iOS (Lightning) and universal (3.5mm). Within, you’ll get a shotgun mic, a grip for your phone, an LED light cube and a tripod, along with some accessories. All three retail for $149, but if you opt for the universal kit you’ll get a double cold shoe (rather than a single one) and a Rycote Lyre shock mount -- something to consider if you plan to be moving around a lot while recording.

The main difference between the mic in each version is the connector on the end of it. But there is one other important consideration: the “universal” (3.5mm version) won’t allow you to monitor your audio with wired headphones -- so while you get the shock mount, it comes with a tradeoff. You can use Bluetooth headphones/Airpods instead, but that’s going to be app-dependent, as not everything has the advanced audio options needed (but something like Filmic Pro, for example, does).

If you make videos with your phone for social sharing, work or just for your own memories, an external microphone is one of the easiest ways to improve them. A few years ago, I might have said a gimbal was the thing to get, but inbuilt video stabilization on phones (particularly on the iPhone and high-end Android models) has come a long way since then. Of course, the ultimate combo would be both, but audio is so often overlooked it really is something worth investing in.

This is easily demonstrated in the two audio samples below. Both were recorded in a very harsh environment -- a large room with high ceilings and no soft furnishings. The recording was taken about two meters away from the speaker and the difference is stark (don’t worry if you don’t speak Spanish, it’s the quality that matters). The one recorded just on the internal mic on the iPhone sounds like it was recorded in a cave. The other one sounds much more clear, clean and focused on the speaker.

If you’re making videos for your small business or social account, the difference in quality can often be the thing that gets you taken more seriously. Of course, the vlogger kit is more than just a microphone (especially given that you could already buy the 3.5mm and Lightning versions of this very mic, only the USB-C option is technically new it seems). There’s the light and, to a lesser degree, the tripod to consider also.

Good light is probably the next easy win in terms of overall upgrading your videos for not a lot of money. There’s nothing worse than squinting at a dimly-lit clip to work out what’s going on. Now, you could get one of those huge ring lights that are all the rage, but that’s not exactly portable, so Rode went with something a little more practical.

The LED cube included in the kit is about an inch and a half square, or almost exactly the size of the GoPro Hero 4 Session without the case if you remember those. Of course, GoPro also makes an LED light which is about half the size of Rode’s but maxes out at 200 Lumens (to Rode’s 300). The light the LED cube emits is plenty to perk up videos I shot indoors, which really helped them pop. In the dead of night, it’ll certainly be enough to illuminate you, if shooting outdoors in the dark is your thing.

You’ll also find some diffuser filters in the box in a variety of colors if white isn’t appropriate or you just want to switch things up with a sultry red or a cooling green. I’m not a huge fan of how the filters clip into the light’s frame, it’s fiddly, but they do the job just fine so it doesn’t feel like you’re staring at the sun.

Finicky filters aren’t the only quirk, either. If you’re using either the USB-C or Lightning models, the shotgun mic attaches directly to the base of the phone. On an iPhone, this places the mic right beneath the home indicator, which makes navigating your phone a bit of a thumb-twister, especially if you’re using the front-facing camera (thus have the mic pointing toward you). It also means that, if you’re holding the phone in your hand while you record, you need to be more careful to avoid knocking it, or risk having dull thuds in your audio.

One last minor gripe, I promise, then I’ll get onto the good stuff: The shotgun mic doesn’t connect to my phone while the case is on, I have to take it off first. The case I have isn’t overly thick (it’s one of Apple’s own MagSafe cases on an iPhone 12). I can’t speak for your case or for Androids, but it was obviously the first thing I noticed. If you don’t use a case, then you’re good to go, or if you use one that has a large cutout around the charging port then you are likely fine, it’s just something to bear in mind.

Okay, with that done, let me be clear: The microphone is the star of the show here. You already heard the difference between the built-in mic and the Rode VideoMic ME-L in the examples above. But that was just one scenario. It performs really well in almost every situation I tried. Sadly, the current restrictions mean I can’t test it in a crowded place, like a coffee shop, so I took some initiative/cheated and pulled up a YouTube video with an hour of a busy brew-house sound playing for an hour (gotta love the internet). This test isn’t like for like, as that ambient noise is only coming from one direction, not all around like in real life, but you can hear the results of both the built-in mic and the Rode below.

Now, the good news is that, again, Rode’s mic wins hands down. As I say, this is not a true test of a noisy environment, but importantly it’s far less annoying to listen to than what my phone could do on its own which seems to compress everything so the background noise really punches through.

The same is true for my outside testing. Rode includes a windscreen/dead cat cover for the mic in the kit, and it’s fantastically large, making it look like you have an overweight gerbil attached to your phone -- I love it. And it does exactly what you want it to, removing all those wild wind noises, leaving you with a clear recording. Once again, the contrast between the Rode mic and the phone’s is stark.

One more thing I like about the Lightning and USB-C versions of the kit is that you can also use the 3.5mm port on the back to record sound in a pinch. It’s primarily there for headphones/monitoring, and the signal is a lot lower than what you get from the Lightning/USB connection, but I was able to record decent enough audio right out of the 3.5mm port with a headphone cable and a lightning adapter. The signal might be too low for some things, anything with an Aux-in, for example, is going to be a push. But I tried feeding it into a GoPro with a media mod and it worked perfectly.

GoPro cameras have an option to boost the input of external mics, and I was expecting to need it here, but the levels were actually better on Standard mode for close up work. In Standard+ (where GoPro adds 20db of gain) it was a little too hot while holding the mic near my mouth, but might be useful for when standing farther away, say, if you have the camera on a tripod and want to record a wider shot, speaking to the camera. Either way, it works, meaning you have a bit more flexibility with this mic beyond connecting it to your iPhone.

I should share a few words on the provided tripod. It’s totally fine. I like that it has the ball and socket joint, as that makes positioning a cinch, although it’s a shame you can’t extend it, even just by a few inches. And there are only really two height settings: Regular and low mode. You can obviously use it as a handgrip too. On the plus side, the top mount screws off, so you can attach it to a variety of other things, including GoPro accessories if you have the screw mount adapter.

This brings us to one of Rode’s main competitors here: Shure. Both companies have realized that vloggers and podcasters are looking for lightweight/mobile solutions and both have several products in this category. Shure also sells a similar offering to the Vlogger Kit — the MV88+. Shure’s approach is similar, you’ll get a mic and a tripod and a mount for your phone, but there’s no light and the bundle costs a shade more at $200. That makes Rode’s a better deal, right? Well, it depends. Shure’s mic feels a little more robust (it’s shorter and thicker than the Rode) and you don’t need to choose which connection to go for, as you can simply switch out the cables, which come in the box — so there’s more flexibility there. Both mics are excellent, so it’ll largely depend on your use case and budget.

GoPro is worth another mention, too, as it has a number of tripods and tons of third-party mounts. It also sells a light and a Media mod so you can plug in your own external microphones. The obvious difference is that you need to have a GoPro (whereas you likely already have a phone). You’ll also need to bring your own mic if you don’t have the media mod, so the two propositions will appeal to different audiences and budgets. Although with the GoPro you have more flexibility on the camera compared to your phone, and its HyperSmooth stabilization is the one to beat.

If, like me, you’re really more interested in the kit for audio purposes (like many, I have taken this time to finally start that documentary podcast), then Rode’s solution is a solid bet if you want something hyper portable that also has solid video chops. Being able to prop my phone up on the tripod and record an interview on the fly is something I have been wanting a solution to for a while, and this feels like a good option. I’ve tried various other mics, and many even compare to the Rode for audio quality (like Shure’s) but lack things like monitoring or the direct connection to the phone (as is the case with Shure’s MV88+). I love how streamlined Rode’s kit is, that it works with other devices in a pinch and the complete package with the light, tripod and accessories are there if I need them.

Update: An earlier version of this story incorrectly stated the Rode mic had a plastic body, this reference has since been removed.