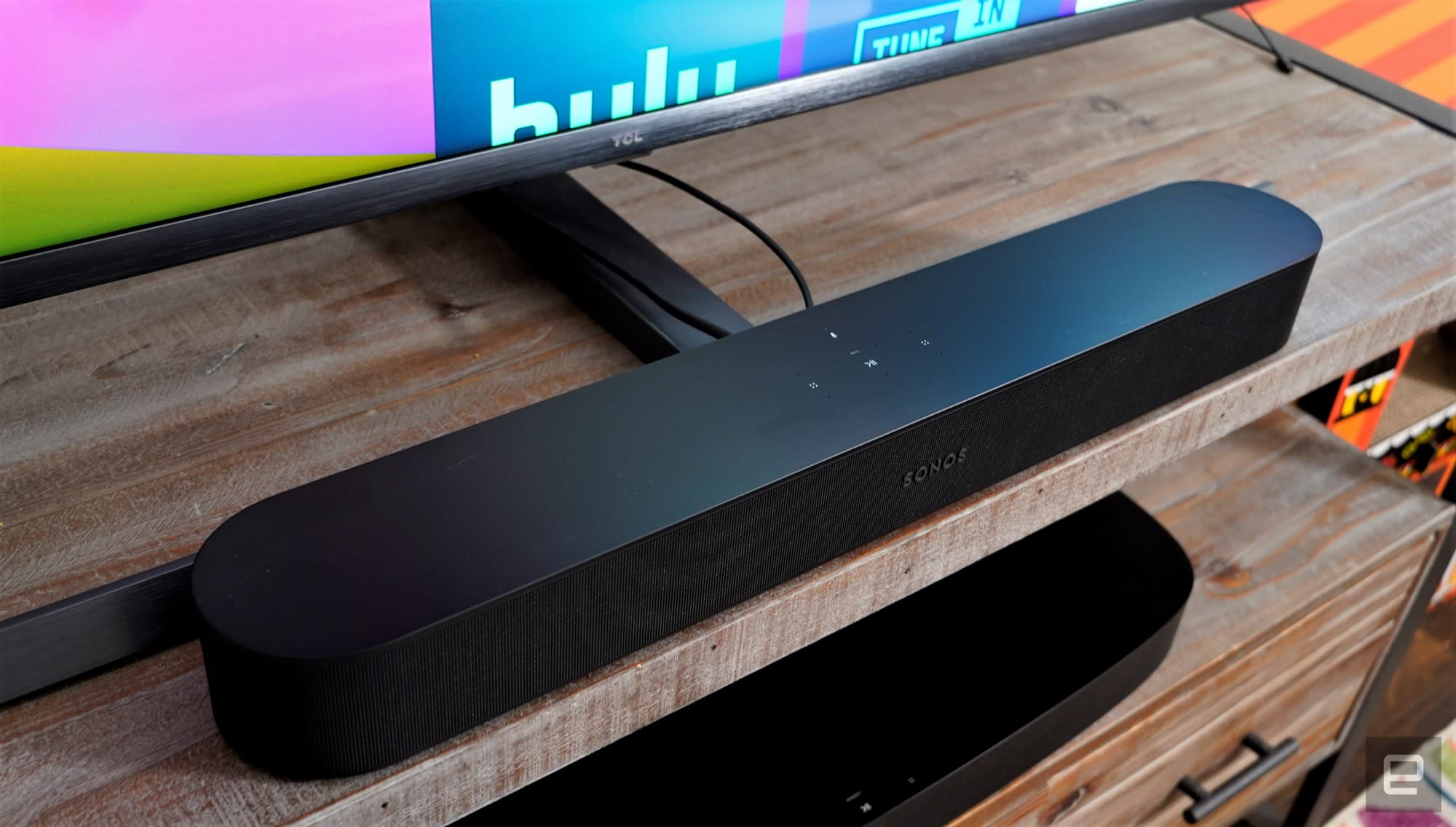 Sonos Beam (Gen 2) review: A bit of Dolby Atmos makes all the difference

It offers more immersive sound in the same compact case.

I didn't expect much from the second-generation Sonos Beam. It has the same exact speaker components as the original, a device we already loved. The main difference is that the new Beam also has more processing power to handle Dolby Atmos surround sound. I tend to want more in a sequel, especially since in this case Gen 2 costs $50 more at $450. But even though it's more of a revision, the new Beam still manages to deliver a wider, more immersive soundscape than before. It proves that having a dollop of Dolby Atmos can go a long way.

The original Sonos Beam was a predictable hit. Consumers were hungry for soundbars to beef up their flatscreen TVs, and it turned out that many people also wanted a cheaper alternative to Sonos's two TV solutions at the time , the aging Playbar and the awkwardly shaped PlayBase, both priced at $699. Enter the $400 Beam: it was compact enough to fit in small living rooms; featured Amazon Alexa built in; and, most importantly, it sounded great. It was an accessible entry point into Sonos's family of connected speakers, pluss an easy upgrade for existing customers.

The new Beam looks almost the same as before; the only difference is that it has a perforated plastic grille around its curved exterior, a departure from the thin cloth covering on the previous-gen model. It's still surprisingly small, measuring just 25.6 inches wide and weighing a mere six pounds. It has the same rear ports, too: Ethernet, HDMI and power. You'll need to plug it into an HDMI ARC/eARC socket on your TV to tap into the power of Dolby Atmos and TrueHD. (But if you've got an older set, you can get basic Dolby Digital decoding with the bundled HDMI to optical adapter.)

Speaking of Atmos, that was a major deficiency on the earlier Beam. When that speaker was released in 2018, soundbar makers like Vizio were already exploring what was possible with Dolby's new technology. Typically, that involved using upward-firing speakers to bounce sound off of your ceiling. And, despite seeming like a bit of an audio hack, in my experience those speakers do a decent job of replicating what you get from Atmos-equipped cinemas, which have dedicated hardware built into their ceilings. There are limits, though: Upward-firing Atmos speakers tend to max out with 15-foot ceilings, and they work best with flat surfaces.

Given the additional hardware and room requirements, why go through the trouble of getting Atmos hardware at all? Simply put, it makes for more room-filling surround sound than traditional 5.1 solutions like Dolby Digital and DTS. Those earlier technologies sent sound to specific channels — left, right, center, two rears and a subwoofer. Atmos is different: It's object based, allowing engineers to map sounds in 3D (XYZ) space coordinates. That lets an Atmos mix automatically scale up anywhere from two speakers (or basic stereo support) to 64 in cinemas.

Sonos is no stranger to Atmos soundbars: It's the defining feature on the $899 Arc. But what makes the second-generation Beam unique is that it doesn't even have upward-firing speakers. It has the same basic hardware as before: a center tweeter, four mid-woofers for mid-range sound, and three passive radiators to handle the low-end. Instead, it's relying entirely on audio processing to simulate the Dolby Atmos experience. The additional CPU speed allows it to power two additional channels: height and surround for both the left and right speakers.

When Sonos first announced the second-gen Beam, I immediately wondered how the heck it could provide any height channels without adding more speakers. It turns out, the company leaned even more heavily into psychoacoustics, or the science of how we perceive sound. According to Scott Fink, the product manager behind all of Sonos's home theater gear, the company can tweak the audio timing and frequency to make it seem as if sound is coming from the side, or slightly above you. It's no replacement for having actual speakers dedicated to blasting height channels, but it worked surprisingly well in my testing.

During the opening chase in Baby Driver, for example, I could hear cars whizzing by my ears, the roar of powerful engines and Jon Spencer Blues Explosion's "Bellbottoms" filling my family room. That same scene on the original Beam sounded fine, but there was no sense of enveloping surround sound. The second-generation model just sounded like a richer experience, as if cotton balls were removed from my ears.

The same was true while revisiting 2015's (seriously underrated) The Man from U.N.C.L.E., or the epic car-turned-motorcycle chase in MIssion Impossible: Rogue Nation. The new Beam is a tiny speaker meant to make a meal of bombastic action sequences, and it does so without distorting or breaking a sweat. Sonos also focused on making dialog clearer too, something I appreciated when conversations were happening amid those huge set pieces.

Mostly, though, I was impressed by what Sonos was able to do with such a small device. You can find soundbars and wireless surround sound systems for less than $450, and many will deliver bigger sound. But Sonos offers things other systems don't. For one, it's easy to set up: You just plug it into the appropriate ports and step through the process on Sonos's app. With competing products, you may also have to find spots to hold rear speakers, which still need to plug into power. As great as the new Beam sounds, though, it's no match for the Atmos capabilities of the Arc. But for half the price, I wouldn't expect it to.

When it comes to synchronized audio throughout your home, Sonos is still the connected speaker company to beat. There's no easier way to program music for house parties (and outdoor shindigs with the portable Roam and Move speakers). The second-gen Beam is a solid addition to the family when it comes to music, though it's less of an immediate upgrade compared to movies. It'll support Dolby Atmos on Amazon Music later this year, but that service currently doesn't have a huge number of Atmos tracks. Sonos isn't saying when it'll support Atmos on Apple Music, but there's technically nothing stopping that from happening down the line.

The new Beam sounded fine while playing back some of my favorite albums, like Bjork's Homogenic and Janelle Monae's The Electric Lady, with a decent sense of presence and some thumping low-end. But it didn't sound dramatically different like it did with action movies. Amazon Music's Ultra HD mix of Marvin Gayes' "What's Going On" sounded very crisp and clear, but I'll be more interested in hearing what the Atmos version of that song sounds like eventually. On my Echo Studio, that Atmos mix almost sounds like Gaye is performing a live concert right in front of you.

And speaking of Echo devices, the Beam’s Alexa integration still works well. Its far-field microphones can hear me from the other side of my large family room, and it supports all of the same commands as Amazon’s own devices. It could easily replace an Echo in the same room, but you can also just mute the microphone and keep your Amazon account unlinked if you don’t want to have it listening in.

The Sonos Beam excels at being a simple and compact soundbar that'll give you a large soundstage for movies. But I'd recommend sitting back and thinking about what's really important to you. Do you care more about having a clean TV setup without many wires? Or do you want a soundbar system with more realistic surround sound? (Actual rears, a subwoofer and upward-firing Atmos speakers.) If so, you've also got great options like Vizio's M-series 5.1.2 for around $500.

You could eventually build a Sonos surround sound system around the Beam by adding two One speakers as rears, as well as the company's wireless subwoofer. But those two pieces of hardware alone would run you another $1,150 (or you could buy them all bundled together for $1,499). If you're going that route, you might as well jump straight to the $899 Arc to have the best possible Sonos system.

The second-generation Sonos Beam isn’t a huge leap ahead of the original, but it’s still a better soundbar overall thanks to the addition of Atmos. If you already own a Beam, you don’t need to run out and grab one. But it’s a solid sub-$500 soundbar if you want to take your movie watching up a notch.

Note: Sonos is a former sponsor of my movie podcast, The Filmcast, but that hasn't stopped me from being critical of the company.