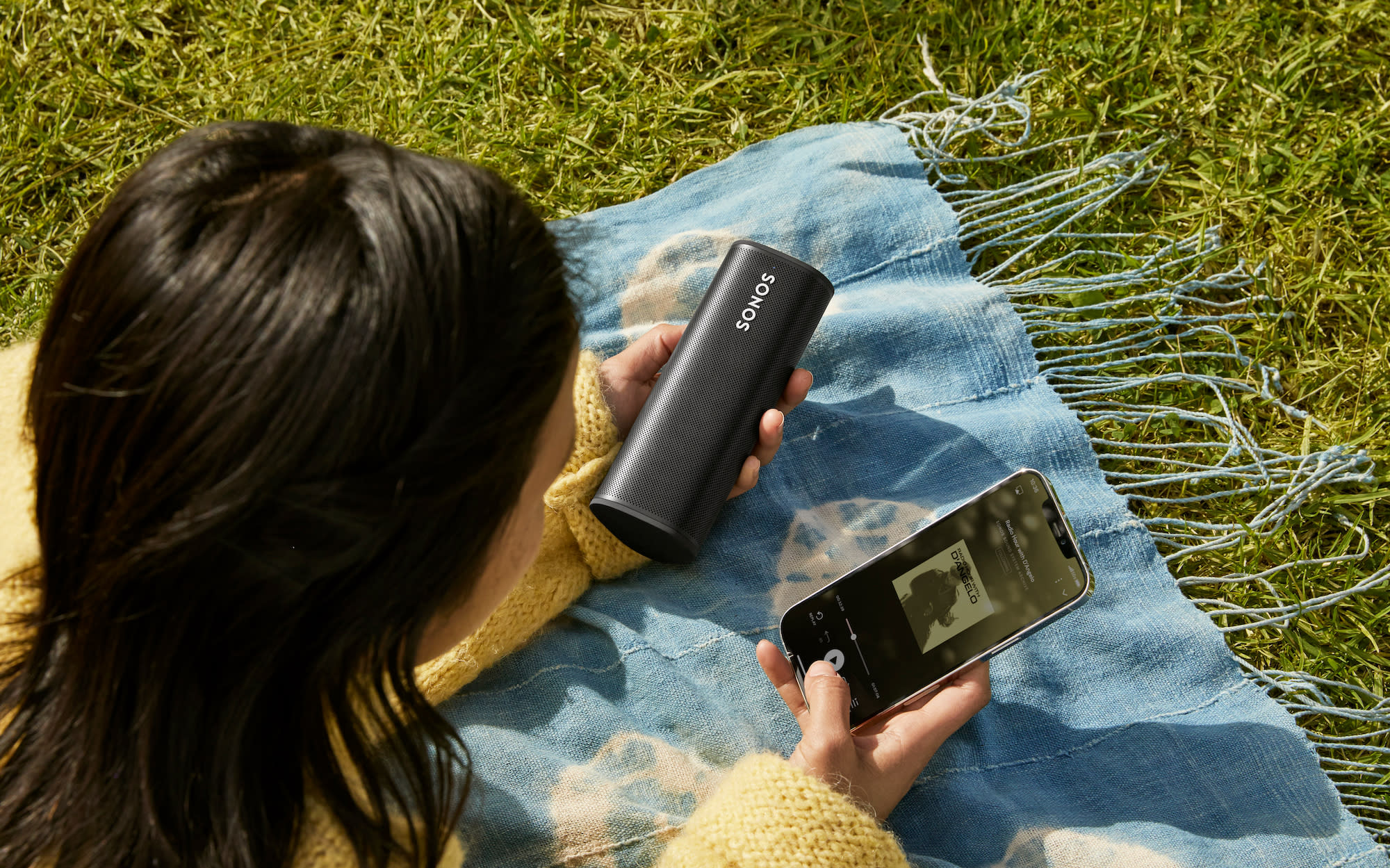 The Roam is Sonos' cheapest and most portable speaker yet

The tiny $169 speaker can go anywhere and work with your Sonos speakers at home.

Today, Sonos revealed its least expensive, most portable speaker yet, the Roam. It’s a follow-up of sorts to the Move, the company’s first portable speaker which debuted in 2019. That speaker may have Bluetooth and a battery, but its relatively large size and heavy weight meant it wasn’t exactly a grab-and-go device. The Roam, on the other hand, is made with portability first in mind, putting it in competition with speakers like the UE Boom 3 and the JBL Flip 5.

My first impression of the Roam is that it’s a portable speaker first that can also be used at home. The Move, on the other hand, is a larger speaker built for the home that you can also take with you. It’s a subtle but important difference in how the Roam was conceived. The $169 Roam is a full-fledged Sonos device, which means when you’re home and connected to WiFi, it works just like any other Sonos speaker. You can group it with other Sonos devices; stream audio from dozens of services; take two Roams and pair them in stereo; use Google Assistant or Alexa for voice control; and stream from Apple devices using AirPlay 2.

But like the Move, the Roam also has Bluetooth on board, which means you can pair a device and stream music to it when you’re away from a WiFi network. Its built-in battery is rated for 10 hours of playback, and it automatically goes into a low-power sleep mode when it’s not in use. It should last about 10 days in sleep mode.

Obviously, being able to link the Roam into a system of Sonos products is a plus for people already in the Sonos ecosystem, but it also has a lot of clever features that further separate it from other portables. For example, the Roam can automatically switch between Bluetooth and WiFi. Once you’ve paired it with your phone, it’ll remember that pairing and be set to go when you take it out of the home. Likewise, when you return it’ll rejoin your WiFi network without prompting. This is an improvement over the Move, which required manual switching between Bluetooth and WiFi.

This speaks to the philosophy Sonos has for the Roam, which is making it simple to use both at and away from home. The Bluetooth-only speaker market is already pretty crowded,” Maxime Bouvat-Merlin, the company’s senior VP of hardware development,” said in an interview ahead of the company’s launch event. “For us, going into this specific market, we had to do more than just put Bluetooth and great sound into these products. We thought really hard about how to bring the Sonos experience from in the home to outside the home.”

That’s the inspiration behind things like the new “Sound Swap” feature. If you’re playing music on the Roam and want to bounce it to another Sonos speaker, pressing and holding the play button will search for the nearest speaker and send the music to it. The idea is to keep the music flowing from away from home into the home.

Sound Swap makes use of some intriguing technology. “Pressing and holding play/pause signals the other players to emit an ultra high frequency sound that only Roam can hear," Hadley Simmons, a product marketing manager at Sonos, explained to Engadget. “Roam can pick up those chirps with its microphones and detect the nearest speaker. It’s basically an easier way to move music throughout your home without having to go back to the Sonos app and sort through your different rooms.” In the same vein, if the Roam is playing music via Bluetooth, you can hold the play button and it’ll automatically stream that music to other Sonos speakers — effectively turning the Roam into a Bluetooth line-in to the rest of your system.

The technology for Sound Swap came out of the Sonos advanced technology group, a team that came together in the last few years. “In the past, we’d try and innovate in the product development process, but that’s the worst place to try and do it when you have a specific schedule and deadlines in front of you,” Bouvat-Merlin said. “So I created a special, standalone group that works on things for two, three, four years down the road.”

All these features are meaningless if people don’t want to take the Roam with them, which means its physical design is probably more important here than with standard home speakers. Based on what we’ve seen so far, the Roam looks compact and easy to move. It weighs less than a pound, and Sonos described it as about the same size as a water bottle. The idea is for it to be small and light enough that you don’t need to think about taking it with you; it just becomes a habit. I haven’t used it yet, but I could definitely imagine it being the kind of thing I’d toss in a bag when I leave the house, whether for a quick trip or a cross-country flight (when that’s doable, anyway).

As usual, there are some smart Sonos flourishes here. The speaker can be used in vertical or horizontal orientation. It detects which way it’s positioned and adjusts the sound accordingly. It’s compatible with all Qi wireless chargers, or you can simply use the included USB-C cable. Sonos is making its own magnetic wireless charger, but unfortunately it’s a $50 extra rather than something included in the box.

The Roam is also rated IP67 for dust and water resistance. In fact, it can be submerged in up to one meter of water for 30 minutes and still work. The Move has superior resistance to temperature fluctuations, but it can’t be dunked in water. Given other companies have speakers that can even float in a pool, the fact that the Roam can survive a trip underwater is crucial.

Finally, and perhaps most importantly, the Roam needs to sound good — no small feat, given its diminutive size. I haven’t listened to it, but. Simmons said users should expect sound quality comparable to the larger Sonos One speaker, albeit without the same max volume. But the bass presence is said to be much larger than you’d expect out of a speaker that small. Of course, we’ll need to wait to hear it for ourselves, but given what companies like Amazon, Google and Apple have done with their own relatively small speakers, I’m hopefully Sonos has worked its magic on the tiny Roam.

As usual for Sonos, the Roam features a number of custom internal components, like the so-called “racetrack” mid-woofer. Since a traditional circular design wouldn’t work in the slim, tall Roam, Sonos went with this oval shape to maximize its size. It also has a dedicated tweeter and two class-H amplifiers. Fitting both a tweeter and mid-woofer into the Roam rather than using one all-purpose driver should make a significant difference in audio quality.

Sonos also included the “Auto Trueplay” speaker-tuning technology it first built into the Move. This means the speaker will use its built-in microphone array to listen to its output and optimize the sound for wherever it’s placed. Trueplay has been available for Sonos speakers since 2015, but they require an iOS device to use to manually tune the device. Not so for the Move and the Roam, and the Roam takes things a step further this time. It’ll be able to tune itself even when you’re not on WiFi, using profiles built directly into the speaker hardware itself.

The Roam is entering a crowded market, but it’s priced competitively, even if it’s still more expensive than many Bluetooth-only devices. It does offer a load of features if you’re already a Sonos user — but its low price also makes it a gateway drug to the Sonos ecosystem if you’ve never tried their products. We’ll need to take a listen before we can judge if Sonos hit the mark, but from what we know so far it’s looking like a compelling option in the ultraportable speaker category. Pre-orders for the Roam are open now on the Sonos website, and the speaker will be available on April 20th.