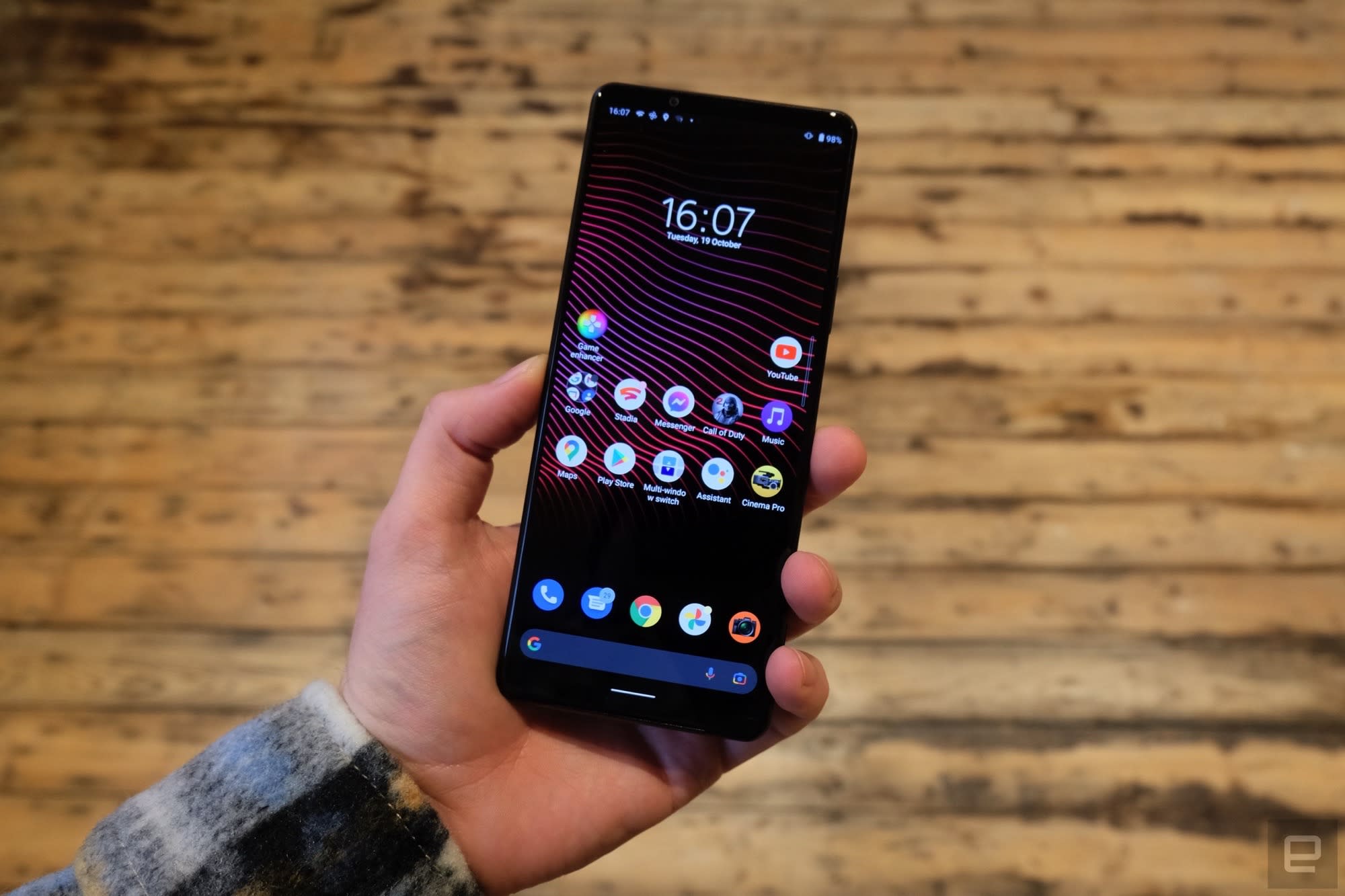 And it's expensive, again.

The Xperia 1 III looks a lot like the smartphones that came before it. If it wasn’t for the matte finish, it would be almost identical to last year’s Xperia 1 II. Sony has stuck to its unusual elongated smartphone form factor while upgrading the screen itself, as well as the cameras.

Yet again, this phone is pitched at a particular kind of smartphone shopper. That’s no bad thing, especially in a time where most smartphones — if they don’t fold — lack anything particularly unique. At $1,300, the Xperia 1 III is also an expensive phone. That’s several hundred dollars more than an iPhone 13 Pro Max and creeping closer to prices typically held for Samsung’s flagship foldables. (Edit: Just as I wrapped up this review, Sony unveiled a new flagship smartphone, the Xperia Pro-1 with a bigger imaging sensor, several attachments and a $1,800 price tag.)

If you're tempted by the potential of unrivaled smartphone camera control — or just love the aesthetic of Sony’s hardware— there’s a lot to like here.

I’m not sure whether it’s the similarities with Sony’s camera series or simply how sleek and understated the Mk.III is, but I love how this phone looks. A black oblong is far from exotic, but it’s definitely attractive. And that’s despite the unusual screen ratio (21:9), which makes the device more elongated than pretty much all other smartphones. In addition, a new almost-matte finish adds to the premium feel, something the Xperia 1 III demands at this price.

The Mk.III lays claim to being the world’s first 4K phone with a 120Hz refresh rate. I’m splitting hairs here, but it’s 1644 x 3840 — so it’s not quite 4K like your TV would show, which would be 2160 x 3840. Predictably, everything on the screen looked incredibly crisp, and my interactions with the phone were also buttery smooth.

The 6.5-inch OLED display continues to show Sony’s obsession with displays, and given the specs, you’d expect it to look as good, if not better, than Samsung and Apple’s top devices. If you decide to switch the high refresh rate on, the Xperia won’t dynamically change refresh rates to maximize battery life. There are a lot of times when you’re simply looking at the screen that you don’t need 120Hz refresh rates.

Whether it’s Samsung’s Galaxy S 21 and its dynamic refresh rates, or the iPhone 13 Pro’s ProMotion, both of those phones flit between refresh rates as needed, reducing the toll on the battery. Unfortunately, once set, the Xperia 1 III’s screen stays at 120Hz.

The phone houses front-facing stereo speakers, which sound good. That’s still a rarity for smartphones. As you might expect from Sony, there’s support for nearly all the cutting-edge audio formats, including its own 360 Reality Audio, Hi-Resolution audio, and Dolby Atmos.

You’ll have to figure out which apps and services offer these upgraded audio experiences, as it’s still a labyrinth of discovering out exactly how to play the highest-quality music files. On that subject, Sony is clinging onto the 3.5mm audio jack for one more year.

There’s a fingerprint sensor built into the phone’s power button on the right edge of the phone, a volume rocker, a two-stage camera shutter button and then yet another button, just because Sony could. It summons the Google Assistant but sadly can’t be assigned to other (more useful functions). In the early stages of using the phone, I’d often press the wrong one, power up the screen instead of launching the camera. Sometimes, I’d do the reverse.

Four buttons on one side is too many and while I eventually got used to it, a dedicated voice assistant button seems entirely redundant.

I might love how the Mk. III looks, but that tall screen will be a struggle for some smaller hands. I find it a bit of a reach for icons at the top of the screen, and drop-down menus usually demand two hands. This form-factor does feel more comfortable in my hands, though, and slides into pockets easier than Apple’s bigger Pro phones, or the Pixel 4a 5G.

Rounding out the list of specs you’d expect to see in a premium smartphone, the Xperia 1 III is running on Qualcomm’s Snapdragon 888 chipset, with 12GB of RAM and 256GB of storage. It is also a little bit more 5G-friendly, working this time around with T-Mobile and Verizon bands. However, there is no mmWave support nor will it work on AT&T’s 5G offering.

Sony has increased the battery size to 4,500mAh, making it notably bigger than its predecessor. Unfortunately, the Xperia 1 III struggles to last an entire day, if you keep the screen running at 120Hz, at least. On days of heavy use, I’d have to recharge the phone by early evening. After dropping the settings down from 120Hz I was typically getting just shy of a day and a half of use, which is a pretty standard figure for most high-end Android devices. The battery is big, yes, but so is the screen.

As with the screen, Sony is taking its own approach with three 12-megapixel cameras of varying focal lengths. That includes a new telephoto lens that can switch between 70mm and 105mm equivalent zoom. Sony says the variable zoom lens helps it to focus faster, which was true in my experience, although I did find there was a little bit too much blur when using the optical zoom at its maximum.

With the Mk.III, Sony also added dual-phase-detection-autofocus pixels, which, paired with 20 frames per second shooting, should offer a better chance of catching crisp shots in hectic settings. You can tap to focus and the camera will track moving subjects, just like a digital camera touchscreen.

Sony has pulled together an intriguing mix of (relatively) low-megapixel sensors and infused it with what it’s learned from its camera series. Compared to what iPhones and Pixel phones do with computational photography and post-processing, Sony offers a more technical approach to capturing shots.

While testing out the phone, I leaned heavily on the “auto” shooting mode, which acts like any camera app on any smartphone. But like the Xperia 1 phones before it, the Mark III comes with a pretty expansive Photography Pro app. Beyond the basic mode, you can tinker with shutter speeds, ISO, color balance and pretty much anything else.

I’ll confess that I’m not the best photographer, and so anything that helps me get a better shot, whether that’s software assistance or higher light sensitivity, is appreciated. Outside of the automatic, simplified camera mode, the Xperia 1 III has a learning curve. Unfortunately, it doesn’t quite match the experience of a Sony camera. I fumbled around for an aperture priority mode (so I could maximize bokeh effect at low f stops), but it doesn’t exist. I was tricked into thinking the Mk.III would work like a camera, but it’s still just a smartphone camera. You can adjust shooting speed and ISO, but not aperture. At times, I felt I wasn’t skilled enough to get the most from the Mk.III. I can take better photos on other flagship phones, but I think that’s due to my own photographic shortcomings.

The Xperia 1 III does great with face detection and often latches onto fast-moving people and pets. However, when you’re using the telephoto lens, the phone seems to hop between fore and background details a little too often. The usual curse of smartphone photography doesn’t escape Sony, either. Low light conditions will still mess up autofocus, no matter how smart Sony has made it. There’s no night shoot mode, either, which is curious in 2021.

Video captured by the Mk.III was a pleasant surprise, whether shooting in 4K or 1080p. I took the phone with me during a trip to Amsterdam and recorded video both in daylight and night-time. The lack of rolling shutter, on a moving tram, and the accurate lighting as I recorded dark streets both impressed me. The footage wasn’t overly noisy or blurry either, which is something you often see from many smartphone cameras when they’re trying to accommodate a lack of light.

If you’re looking for finer control with video, Sony's Cinema Pro app returns again, offering equivalent pro controls but for video. You can select shooting modes like 10-bit color and high frame-rates while toying with built-in filters, shutter speed and even manual focus. You’ll need to come to Cinema Pro with at least a passing understanding of what all those things do. I found it a little too complicated, but at least the Mk.III offers enough screen space to tap between settings and adjust everything.

And a quick note on the front-facing camera: It’s terrible. Blurry, noisy and shockingly under-specced, at a time when we’re using selfie-cams more than ever. It’s an unusual camera miss for Sony.

Aside from the camera app, Sony has played it relatively safe in its customization of Android software in recent years. While there are a few homemade apps that you won’t touch (like the news feed one), there are some tricks you won’t find on other phones, like the ability to use Xperia 1 III as an external monitor. The feature works with cameras capable of USB Video Class (UVC) output (such as, conveniently, Sony’s Alpha camera series), but it’s very much a simple, expansive display for your camera. Having said that, this 6.5-inch 4K display is almost definitely better than whatever’s on the back of your camera.

Sony has also simplified connecting a PS4 DualShock controller to the Mk.III, with a prominent connection option within the settings app. You will probably need to pick up some kind of mount to keep the Xperia 1 III attached to your controller. Oddly, as of the time of writing, you can’t pair the PS5’s DualSense controller.

The Xperia 1 III is not for everyone, but for devoted smartphone camera (or Sony) fans, it’s another intriguing device, despite the prohibitive price. I can’t unequivocally say it’s the best smartphone camera, but, like its predecessors, it does things its own way, whether that’s the camera array, deeply customizable camera app or the slick, sharp 4K 120Hz screen. Does anyone need a 4K phone screen? I’m not sure, but Sony makes a better argument for it with its external display app.

The Mk.III, with its almost matte finish, looks and feels more like Sony’s family of alpha cameras, or perhaps more accurately, its high-end RX point-and-shoots, and when most other phones are backed with glass or glossy plastic, I think the Xperia 1 III has its own unique charm. Barring the iffy selfie camera, the latest Xperia 1 doesn’t do anything poorly and if you have the patience and the skill to master it, the Mk.III can take some stunning shots. For a lot of people, however, letting Apple, Google or Samsung's software take up some of the slack will lead to better pictures, no matter how technically impressive Sony’s proposition is.