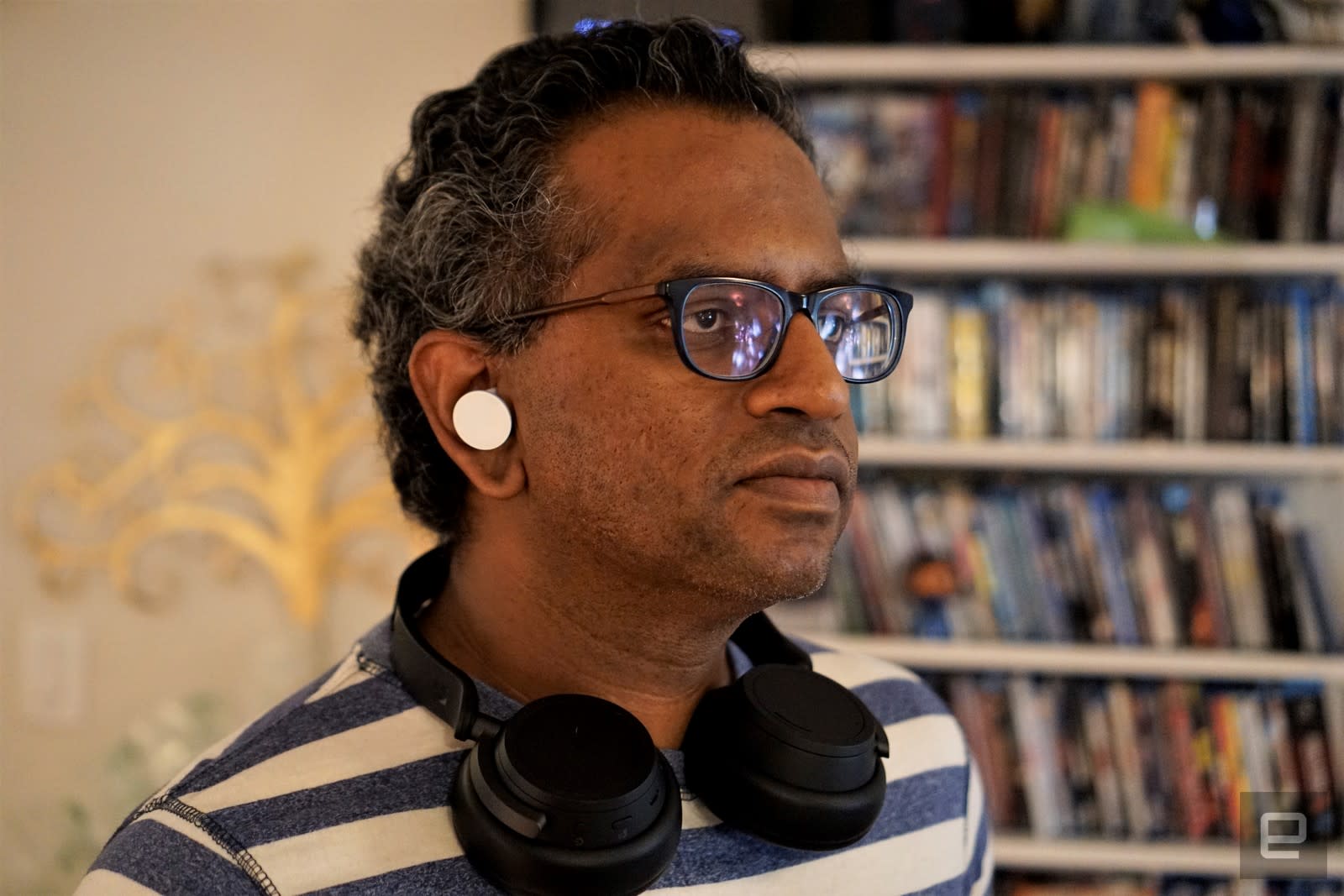 Microsoft can't help but be different. Its Surface computers have all tried to deliver something new in the PC world (well, except for the conventional Surface Laptop). So it wasn’t a huge surprise that the Surface Headphones brought a few new ideas to the premium audio world two years ago. It had rotating dials for adjusting volume and noise-canceling levels. Now with the Surface Earbuds ($200) and Headphones 2 ($250), Microsoft is once again aiming to stand out with a focus on comfort, ease of use and quality. And in their own ways, they’re each a success.

Let's start with what's good: The Surface Earbuds are some of the strangest wireless buds I've come across. While you're wearing them, they resemble gauge earrings more than any tech product. But it's clear that plenty of thought went into their design. Their rubber tips are curved to rest against your inner ear, but they don't actually form a seal like typical in-ear headphones. Instead, they sit just outside your ear canal, allowing external sound to come through while also delivering their own rich audio. 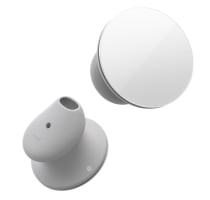 The Surface Earbuds nestle into your ears securely without the need for the fins you see on wireless sport buds. Conversely, though, they're not as secure during vigorous exercise where your head is bobbing around a lot. That seems to be a trade-off Microsoft made for comfort, as those fins tend to feel irritating over time. With the Surface Earbuds, though, it barely feels like you're wearing anything at all -- a combination of their lightweight design and origami-like fit. Microsoft also includes three different tip sizes in the box, so it's not one-size-fits-all like Apple's AirPods (which, I might add, can't even stay in my ears while I'm sitting still).

The Earbud's large circular pads also give you a surprising amount of control. Swiping backward or forward on the left bud lets you hop between tracks -- a seemingly basic feature that you rarely see on wireless buds. Meanwhile, swiping up and down on the right unit adjusts volume. A double tap lets you pause and play music, and a long press activates your phone's voice assistant. During my testing, all of the controls worked smoothly. Having the track and volume controls on separate ears was particularly smart, as it helped avoid skipping tracks when I just wanted to change the volume. (That’s something even Sony's full-sized WH-1000XM3 headphones are guilty of.)

You can see much of the same ingenuity on the Surface Headphones 2. At first, they look exactly like the last pair, which isn't a bad thing. They still have plush cushioning around the earcups, which are also roomy enough to fit in large ears like mine. The top of the headband has additional soft material to avoid putting too much pressure on your head, and at 0.64 pounds, they're incredibly light. And of course, the unique dials have returned. With this new model, Microsoft also tweaked the cups so they could rotate a full 180 degrees when resting on your neck, making them more comfy during music breaks.

I didn't spend much time with the original Surface Headphones, but compared to premium noise-canceling headphones like Sony's 1000XM3, Microsoft is competitive when it comes to fit and comfort. That's all the more impressive given the Surface Headphones 2 are priced at $250, undercutting Sony’s latest by $100.

It makes sense why Microsoft is emphasizing comfort so much. Companies like Anker have proven that you can make inexpensive earbuds and decent-sounding noise-canceling cans. But crafting something that you'll want to wear all day takes a lot more effort. The Surface Headphones 2 and Earbuds are so easy to wear, it's easy to overlook some of their flaws.

The Headphones 2, for example, sounds great, but it's clearly not as nuanced or detailed as the more expensive 1000XM3. It handled the sonic complexity of Clint Mansell's score for The Fountain well enough, especially in the epic track "Death is the Road to Awe." But I never got the spine-tingling sensation I felt with Sony's pair, which were so detailed I could clearly make out every instrument in the orchestra, no matter how quietly or loudly they were playing.

The Surface Headphone 2's dynamic range also feels more compressed, and the low-end in particular sounds muddy. Casual listeners probably won't notice the downsides, but they're clearly not tuned for audiophiles. (Microsoft also added AptX support this year, but I didn't have a device to test out that functionality. In general, too, I've found that AptX doesn't necessarily lead to better sound.)

Surprisingly enough, the Surface Earbuds fare a bit better when it comes to quality, though that may be partially due to the lower expectations I have for wireless earbuds. Its sound is rich and punchy, no matter if I'm rocking out to Yoko Kanno's Cowboy Bebop soundtrack or revisiting The Prodigy's Fat of the Land. The low end makes an impact on the Earbuds -- something you really only see with in-ear buds -- and it does a great job of replicating mid-range complexity and sparkling high notes. My only complaint: I wish I could turn up the volume louder.

I'd imagine that'd be a problem in crowded and noisier environments (which I'm avoiding for obvious pandemic-related reasons), since the Earbuds have an open design. They purposely don't block out external noise, as Microsoft designed them to be buds that help you stay connected to the real world while enjoying your tunes or podcasts. I don't think that's just marketing fluff. If the company wanted to seal out sound completely, it could have gone for a more traditional in-ear design.

If you really want to quiet the world, the Surface Headphones 2 are the obvious alternative. It offers 13 levels of noise canceling and an over-ear design. While Sony's premium cans offer better sound dampening (I compared both of them while sitting in front of my loud dishwasher), I preferred Microsoft's flexible approach to the technology. If I wanted to completely shut out the world, I just have to turn the dial on the left cup completely forward. And the other settings let me choose the amount of sound to let back in. It can even amplify external sounds so you're fully aware of the outside world (something that's particularly useful if you're keeping an eye on a baby monitor at night).

Both the Surface Earbuds and Headphone 2 feature a plethora of microphones, which was particularly helpful whenever I need to jump on phone calls and Zoom chats. According to my colleagues, both sets sounded crisp and clear. That's more than I can say for many other wireless headphones. Microsoft’s mics are also useful for activating virtual assistants and dictating text in Microsoft Office. I rarely had to repeat myself or correct any transcriptions.

As much as I liked the Surface Earbuds, though, it's worth noting that they have some limitations if you just want to use one earpiece, which is my preferred way for listening to podcasts (or while walking around NYC, when that was possible). Throughout my testing, I noticed that the left earbud would start to lose reception if I moved too far away from the right bud. After chatting with Microsoft, it turns out that's because only the right Surface Earbud pairs with your phone. The left one basically feeds off of that connection.

That's a surprising design choice for Microsoft, since it was a connection method used by first-generation wireless earbuds. These days, devices like the AirPods Pro and Sony's WH-1000XM3 pair each earbud to your phone individually. That typically makes the reception better, and it also gives you the flexibility of using either side on their own. Perhaps Microsoft can fix this connectivity method with the next Surface Earbuds, but for now single-headphone users will have to live with the right bud.

At least the Surface Headphones 2 offer more flexibility. I was able to pair it with my Apple TV and iPhone at the same time, and it was smart enough to switch audio from both sources. That's a feature I've been longing for with Sony's WH-1000XM3, which can only pair with one device at a time. For the past few years, I've had to manually disconnect those cans from my Apple TV whenever I used them with my phone. The Surface Headphones 2, meanwhile, just worked. This is the beauty of competition, though. Now Sony has more of a reason to fix this issue in its otherwise perfect headphones.

Microsoft claims the Surface Headphones 2 last up to 20 hours with noise canceling turned on, while the Earbuds are rated for eight hours per charge (with another 16 hours of charge in their case). In my testing over the past week, which typically involved watching a few hours of TV, or jamming to music at night, the Headphones 2 have lasted over seven days without a recharge. The Earbuds typically sit around 50 percent after four hours of playback, and together with their charging case, I've been able to use them for six days without needing more juice.

After listening to countless podcasts, video game remixes and late-night TV shows, it’s clear to me that Microsoft has found a decent audio niche. It’s building quirky-yet-comfortable devices that are easy to use. Aside from the weird connectivity arrangement of the Earbuds, I don’t have many complaints. They’re still some of the best wireless buds you can buy today. And the Surface Headphones 2 prove that Microsoft can actually learn from its earlier mistakes. They’re both great choices for cranking up the tunes and drowning out the world.