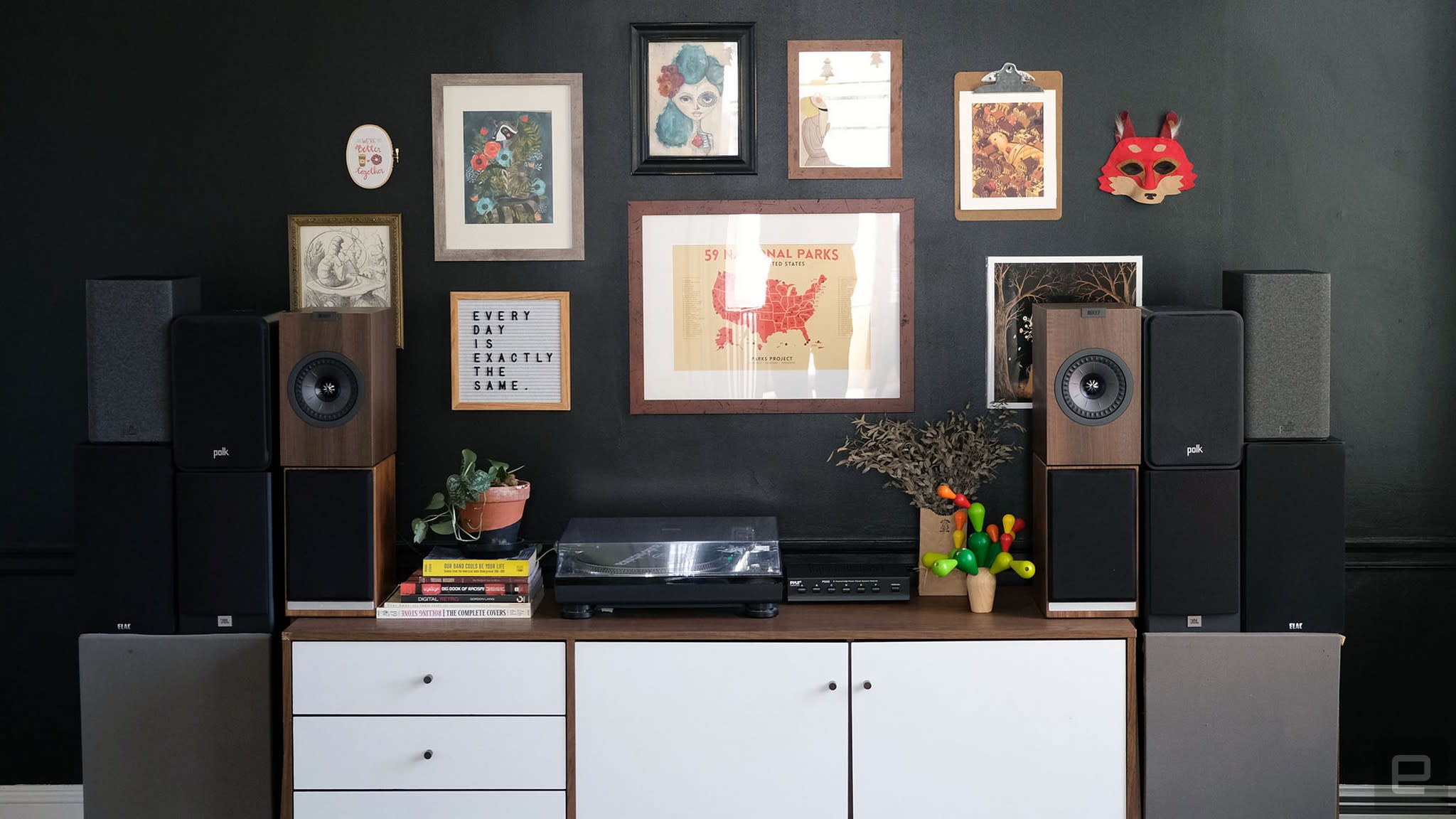 The best passive bookshelf speakers for most people

We tested a bunch of five to six-inch speakers under $600 and picked our favorite.

T. O'Brien
@TerrenceOBrien
July 1, 2021 10:00 AM
In this article: speakers, thebuyersguide, kef, gear, audio, elac, evergreen, stereo, entertainment, best tech, hifi, feature, audioengine, commerce, streamshopping, review, jbl
All products recommended by Engadget are selected by our editorial team, independent of our parent company. Some of our stories include affiliate links. If you buy something through one of these links, we may earn an affiliate commission.

Vinyl has been on a resurgence for some time, and the pandemic somehow only accelerated that. It’s got many out there looking to upgrade from a cheap Crosley turntable and build out their first HiFi system. Of course, there are multiple pieces that go into building a decent stereo, but perhaps the most important is the speakers. If your speakers don’t sound good, it basically doesn’t matter what you connect them to.

This is understandably the part of their setup that people likely spend the most time researching. And you have to make a number of choices. One of the biggest is: active or passive? Both have their advantages, but for the sake of this guide we’re going to focus on passive speakers, which require a separate amplifier.

Active speakers have an amplifier built in. Usually, the two things are specifically designed to work together, which means you're getting a more faithful version of the manufacturer’s aural vision. And since you don’t need an external amplifier, active speakers also take up less room. While active speakers are more expensive than passive, the fact that you need to buy an amplifier to power passive speakers means the savings aren’t as great as they might initially seem. The primary benefit of passive is greater flexibility. You can’t go out and buy a new high-end amplifier and connect your active speakers to it; you’re stuck with what’s built in. Also, since active speakers require power, you’ll have to make sure they’re near an outlet.

We’re also putting a cap on our spending for this guide: a somewhat arbitrary $600. Anything over that and you’re starting to get into budget audiophile territory. It also basically limits us to bookshelf speakers between five and six inches. While you can certainly get floorstanding speakers for that much, the quality of the drivers will likely be better on bookshelf speakers at the same price point.

A note about testing

Obviously, I could not test every set of five to six inch bookshelf speakers under $600, but I’ve tried enough and done enough research to feel confident in my recommendations. I’m sure there are other good speakers out there, but I don’t think anyone is going to regret buying the sets here.

Additionally, speaker preference is largely subjective. But I did my best to be as objective as possible. All of the speakers were connected to a Pyle PSS6 switcher with the same wire for quick side-by-side comparisons. After I’d tested them all myself I enlisted multiple people to listen blindly and then rank them based on their preference to see if their opinions lined up with my own. Testing included playing new and vintage vinyl, as well as streaming songs from Spotify.

Also worth noting: I am not an audiophile. This is not a guide for audiophiles. I want my music to sound good, but I’m not about to drop the price of a used sedan on my stereo. My setup includes an Audio Technica Audio-Technica AT-LP120 and a Chromecast Audio running through a Technics SA-EX110. This is not fancy stuff, but it is certainly an upgrade from a Crosley Suitcase turntable or even a higher-end Sonos system.

The best for most people: Audioengine HDP6

Honestly, a lot of the speakers I tested sounded eerily similar to each other. But not the $399 Audioengines. They had a much brighter sound and a lot more clarity than all the others, with the exception of a significantly more expensive KEF pair. The particular pair I tried also came in a gorgeous “walnut” enclosure that helped them stand out in a sea of utilitarian black.

The HDP6s deliver especially strong mids that shine when it comes to vocals and guitars. But they sound quite balanced across the entire spectrum. Towering compositions like Nine Inch Nails “The Day the Whole World Went Away” sprung to life and revealed nuances that, frankly, I’ve never noticed before even on headphones. And Promises, the recent album from Floating Points, Pharoah Sanders and the London Symphony Orchestra, was so enveloping it made me want to throw my current floorstanding speakers in the trash.

While no bookshelf speakers on their own are going to be able to deliver the sort of room-shaking thump that floorstanding speakers or a subwoofer can deliver, the HDP6 performed admirably with bass-heavy songs. They didn’t have the most low end of my test units, but drums and bass were still punchy and clear.

For those who want the best sound: KEF Q150

If your number one concern is sound quality, regardless of anything else, check out the Q150s. These are the entry-level option from noted audiophile brand KEF and the only speakers that beat out the Audioengines in any of my blind taste tests. They didn’t come out on top every time, and some people had trouble deciding between the two, but ultimately I think the KEF’s have the slight edge in pure sound quality. They had a bit more volume at the extreme lower and higher ends of the spectrum. It added a certain sparkle to tracks like the Beach Boys’ “Wouldn’t it Be Nice,” while Run the Jewels’ “JU$T” hit a little bit harder than on the HDP6s. The difference can be subtle depending on what you’re listening to, but it’s undeniable in side-by-side testing.

The audio profile of the KEF is similar to that of the Audioengines. They’re both much brighter and with a lot more treble and midrange than all the other speakers in this roundup. If you’re into listening to classical or jazz on high quality vinyl, these are going to deliver exactly the sort of frequency response you’re looking for.

What stops the Q150 from topping this list is the list price. At $600 they're essentially tied for the most expensive speakers I tested. (The Polk R100s were $599, but didn’t make the final cut.) While the Q150s sounded slightly better than the HDP6s to my ears, they weren’t necessarily $200 better. At the time of this writing, however, the Q150s were on sale for $400, making them a compelling option to the Audioengines.

For the bargain hunter: JBL A130

The JBLs were pretty consistently in the middle of the pack when it came to listener preference. They’re not as bright as the KEFs and the Audioengines, but not quite as muddy at the lowend as the Polk S15s. If you’re just looking for a decent set of speakers and don’t sweat over spec sheets, or if you’re primarily listening to streaming music and only putting on vinyl occasionally, these are a great option if you can find them on sale.

Ok, so these speakers break our rules a bit but, if you opt for the slightly larger 6.5-inch DB6.2s, instead of the DB5.2s, you get a lot more thump at the bottom end. The Debuts can’t quite match the Audioengine or KEFs when it comes to clarity, but you’ll feel every 808 hit a lot more. Backxwash’s new album I Lie Here Buried with my Rings and my Dresses raged harder on the ELACs than it did on the Polks, JBLs or even the KEFs. And they only cost $350, which isn’t bad at all.

If you’re primarily listening to electronic music and modern hip hop, you might consider the Debut 2.0 DB6.2s.

For those who want to ignore my advice:

If you can’t find the JBL A130s on sale, and really want to save as much money as possible, you could snag the Polk S15s. The S15s don’t sound bad, but the JBLs are definitely superior. They don’t have as deep of a soundstage as the other speakers I tested and the lowend can be a little undefined. These are probably better suited as part of a home entertainment system than a stereo. At a list price of $229 they might seem like a bargain, but I’d save your pennies for a bit longer and spring for something better.

The Polk R100s are decent sounding speakers. Perhaps slightly better than the JBLs, though with a sound profile closer to the Polk’s own S15. The problem is they’re $600, tying them for the most expensive I tested. At half the price these might be a solid option, but the $600 KEFs and $400 Audioengines were ranked higher than the R100s by every tester.

I have no doubt that these are very good speakers: They’re currently Wirecutter’s top choice. But I could not test them and therefore cannot vouch for them.