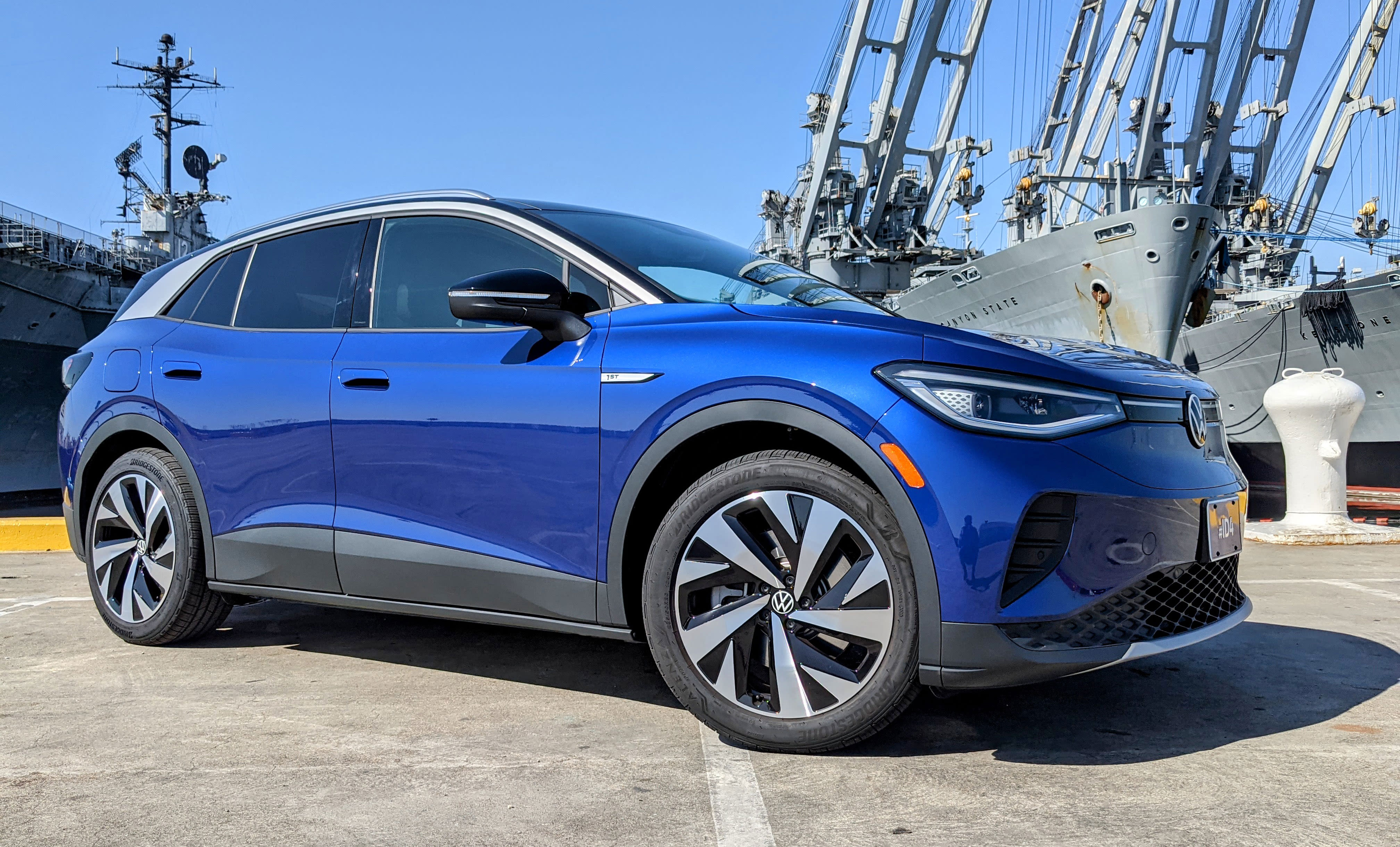 Volkswagen's ID.4 EV is the basic people mover you've been waiting for

It's a solid first attempt on VW's part, but I'm going to wait a few model years to buy mine.

Dieselgate has shaken Volkswagen to its foundation, prompting the automaker to embrace a radical new direction and invest nearly $40 billion into EV R&D as well as the factory tech needed to make it. The initial result of that massive investment has now hit the streets in the form of a compact crossover SUV. Say hello to the 2021 ID.4, VW’s first EV for the people.

The ID.4’s on-paper stats aren’t particularly striking, especially when compared to some of its higher-priced, luxury alternatives. With a 77.0-kWh lithium-ion battery pack putting out 201 HP and 229 pound-feet of torque, the ID.4’s specs are very much in line with its gas model equivalents like the Honda CRV or similarly specced EVs like the Hyundai Kona or Kia Niro EV (though each of those only have 64 kwH batteries).

The ID.4 tips scales at 4,600-plus pounds. Yeah, that’s stout, even for an electric and it’s roughly 800 pounds heavier than the biggest 2021 Kona EV. As such, you shouldn’t be surprised that the EV crossover takes its sweet time getting up to 60 mph in around seven and a half seconds, which is pretty pokey for an EV. Even when overtaking other vehicles at freeway speeds, the ID.4 can feel downright lackadaisical. Combined with a governed top speed of 100 MPH, the ID.4 is very much a people mover, not a sports car in disguise.

Its EPA estimated 250-mile range feels generous and seems very much geared towards urban errands and freeway commutes with ready access to charging stations. Even when using the electron-sipping Economy mode to cruise along a nearly empty Highway 280 outside San Francisco, the power gauge shrank far more quickly than I was comfortable with. This was the first EV I’ve test driven where I’ve felt a bit of palpable range anxiety. Thankfully, the ID.4’s 400V electrical architecture supports both level 2 and DC fast charging protocols which enable it to imbibe an 80 percent charge in, respectively, around 9.5 hours and just under 40 minutes (per VW’s estimates).

Style-wise, I find myself smitten with the ID.4. The crossover’s exterior is less windswept than last year’s Honda HRV but not as rigidly straight-edged as Volvo’s upcoming C40 Recharge. And unlike what we saw on the Mach-E, e-tron GT or even the XC40 Recharge, the ID.4 appears to use surprisingly muted head and tail lights — you won’t find any Thor’s Hammers bedazzling the hood or distended brakelights climbing the trunk lid like LED ivy. Kind of a shame, really.

The interior is sparse. But, I guess, no more sparse than any of the other last few EVs I’ve recently been in? Honestly, They all feel sterile and minimalist to me, if only to varying degrees. In this case, the dashboard of the ID.4 comprises two LED displays, a smattering of steering column stalks and some AC vents.

The gear shift is located on the steering column as well and it’s weird — basically a wide paddle mounted on the column and capped with a parking brake button. You twist it back and forth to change between forward and reverse gears. I mean, I wasn’t initially a fan of the Mach-E’s cylindrical iDrive-style shifter but at least it didn’t take me 5 minutes just to identify the damn thing the first time I got into the car. Same with the Start button. I haven't thought to look for a start button on the steering column itself since the days of physical ignition cylinders. Touche, Volkswagen.

Despite the confusing nature of various sticks, stalks and buttons, the cabin itself is really quite comfortable. It’s roomy enough for five grown adults to fit in without having to slouch in the back seat, plus the perceived headroom and vertical space is accentuated by an all-glass roof. Unlike the Mach-E, the ID.4’s roof is much less opaque and is instead concealed from external prying eyes by a rollaway cloth headliner which slides out of the way at the swipe of an overhead touch control. The trunk space is equally well appointed with 30 cubic feet of space that more than doubles if you lower the rear seat backs.

The infotainment system, however, is like if 2020 were digital cabin controls. I’ve yet to encounter such a system with a steeper initial learning curve. The menu system feels like it was designed via dare. Upon taking delivery of the vehicle I was auditorily assaulted with adult contemporary music for an unconscionable span of time while I tried in vain to locate a power button, a pause button — hell, even the volume controls — in what proved to be VW’s byzantine infotainment menu system. And for that I will never forgive you, Michael Bolton. YOU KNOW WHAT YOU DID, MICHAEL.

Thank goodness for a robust voice control system combined with integration for both Android Auto and Apple CarPlay to enable more seamless control of the cabin environment. But note that these aren’t fully integrated like what you’d see on the XC40 Recharge or the Polestar 2 with Android Auto — those operate directly through the infotainment system head unit.

The ID.4 does bear a passing resemblance to the Tesla Model Y, and I like that, it’s just tall enough to provide a clear view of the traffic around me without feeling top-heavy — the thousand pounds of battery pack under my seat certainly helps with that. The suspension is strung tightly enough to keep the ID.4 from body-rolling through turns while remaining soft enough that driving over potholes wouldn’t jar my spine out of alignment.

Oddly, I could seem to find a one-pedal driving option. One-pedal driving is a system found in EVs that uses the accelerator pedal to modulate both the vehicle’s drive and braking — press down on the pedal to go faster, ease off it to automatically engage the regenerative brakes and recoup precious charge. I personally am not a fan of the method but its absence from a vehicle so clearly designed as a practical family commuter is both noticeable and notable.

The ID.4’s ADAS system, IQ.DRIVE, works generally as you’d expect it would. It offers the standard mix of forward collision warning, autonomous emergency braking, blind-spot monitoring, rear traffic alert, and adaptive cruise control. In my limited experience with it, I found the lane keeping feature demanded an iron will to engage as the vehicle kept seeming to delay recentering itself within the lane until it was already riding the side marker. It’s certainly no hands-free steering like what GM’s SuperCruise feature offers, but this is helpful when you're in traffic and trying to fight through infotainment menus.

The ID.4 starts at around $40,000 and comes available in three trim packages, the Pro, the Pro S and the 1st edition. All three are currently only available as RWD though the Pro and Pro S will begin offering an AWD version later this year as a $4,000 option. Specifically, the 1st Edition, which I drove, starts at $43,995, the Pro will put you back $40-44,000 depending on drive type and the Pro S (the S stands for Statement) will start at $44-48K with the option to upgrade to 19-inch rims and a 12-inch infotainment display for an added $1,500.

Overall, the ID.4 is a solid first attempt at an EV. Sure Volkswagen included a few… ahem, unusual design decisions, it’s range and power consumption were twitchy enough to keep my eyes glued to the battery gauge during my drive, and the whole vehicle in general felt just a touch under-powered. But this is the first of what we expect will be many more EV models from the automaker. I’d personally wait a model year or two for everything to fully shakedown and for VW to work all the bugs out but if you’re in the market for a sensible mass-market EV that can shuttle your family around town, carry home a full load of groceries, and perform all those other innocuous errands that used to fill our days before the pandemic hit, the 2021 ID.4 is well worth your consideration.