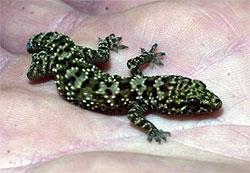 Researchers at BAE Systems' Advanced Technology Centre in Bristol seem to have take a cue from Q's play book, developing a new synthetic material that could be used to create special wall-climbing suits for soldiers and spies. The material is designed to mimic a gecko's foot, which is covered with hairs so small that they form a bond with just about anything they touch, but can still be easily peeled off. In addition to human super-hero antics, the researchers say the material could also be used for wall-climbing robots. But the Brits aren't the only geeks that have turned to geckos for inspiration. As you may remember, some peeps at Stanford recently managed to not only replicate a gecko's sticky feet, but create a full-fledged geckobot.

In this article: advanced technology centre, AdvancedTechnologyCentre, bae systems, BaeSystems, gecko, material, synthetic, wall-climbing
All products recommended by Engadget are selected by our editorial team, independent of our parent company. Some of our stories include affiliate links. If you buy something through one of these links, we may earn an affiliate commission.
Share
Tweet
Share