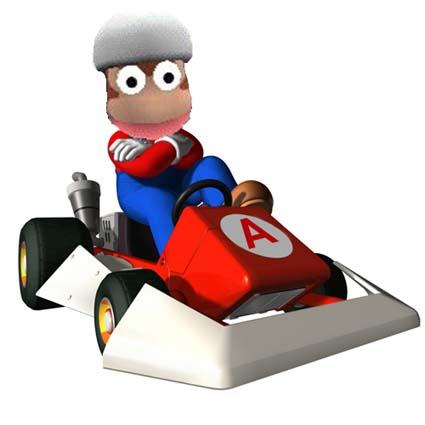 Details about the Ape Escape racing-themed game have been reported by Famitsu recently, and I must say, only the Japanese could come up with something this strange. The game, which in Japan is titled Sarugetchu Piposaru Racer, goes Go-Bot style by putting wheels on monkey's arms and legs and will have 46 different racers to choose from.

But because of the ways these vehicular monkeys are built, a racer's speed and power-sliding can be altered by re-positioning the monkey's arms or legs during the race. In addition, the game will feature monkey-vehicle customization and upgrades. Look to get your monkey business on later this year.

I really don't know what to say about this game, but it just might be the kind of game the PSP needs, and if it'sis successful, it could open the floodgates in combining monkeys or other animals with all kinds of different things. How about we tar and feather some monkeys, slap on some machine guns or harpoons on their heads and have a flying-based combat game? The possibilities are endless, my friends.

In this article: Ape Escape, Ape Escape Racer, ApeEscape, Famitsu, Kart, PSP, Racer, Sarugetchu Piposaru Racer, SarugetchuPiposaruRacer
All products recommended by Engadget are selected by our editorial team, independent of our parent company. Some of our stories include affiliate links. If you buy something through one of these links, we may earn an affiliate commission.
Share
Tweet
Share