Intel inside the next XO OLPC? 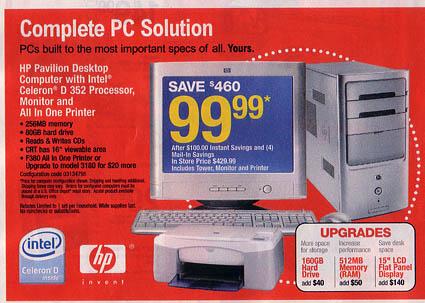 So while Nicholas Negroponte was noodling around with his pet project -- the computer formerly known as the $100 Laptop, and now called the 2B1 -- spending precious hours changing every aspect of it from the name to whether or not it had a hand crank, Office Depot went and beat him to the punch, sorta. Ok, sure, the initial outlay was more than a hundred bucks, but after $330 in mail-in rebates, this past Labor Day weekend Office Depot sold an HP minitower with a Celeron D 352 (3.2GHz), 256MB of RAM, 80GB hard drive, CD burner, a 16-inch CRT and an F380 printer for the low low price of a century bill. Although it may not come it bright colors, assuming you do get your rebates you'll be spending far less than the $130-$140 that NickNeg's cute creation will cost you. Oh yeah, and there isn't a minimum order of one million, either.
In this article: $100 laptop, $100Laptop, 2b1, hp, nicholas negroponte, NicholasNegroponte, olpc
All products recommended by Engadget are selected by our editorial team, independent of our parent company. Some of our stories include affiliate links. If you buy something through one of these links, we may earn an affiliate commission.
Share
Tweet
Share