NYC creates a high-level position to oversee ethics in AI

Algorithms help an artist tease portraits out of thread 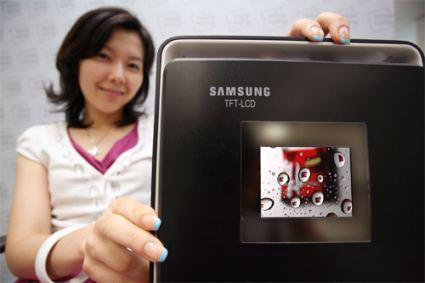 Samsung has just revealed a new mobile display driver IC (DDI) which claims to deliver clearer images in broad daylight, and while this sounds like a promising development, we're gonna wait to see it in action before passing judgment. What makes this so-called "intelligent" DDI different from the ones currently driving LCD screens is that it contains a built-in photo sensor that detects 32 levels of ambient light and uses a proprietary algorithm developed in conjunction with the Samsung Advanced Institute of Technology to adjust properties such as brightness and saturation at the individual pixel level. Basically, the new DDI promises to optimize display viewing in direct sunlight while at the same time reducing power consumption by ramping down the brightness in lower-light environments. Our skepticism stems from the fact that this tech doesn't sound like it really does anything to combat sun glare, and since we always keep our brightness maxed out anyway, we're not sure how much benefit we'd get from an auto-adjusting screen. Like we said, though, we'll wait until we see one of these Samsung-powered displays in action before completely dismissing its effectiveness, and it sounds like we won't have to wait too long, either -- mass production of the new mobile DDIs is scheduled to begin before the end of the year.

[Via Digital World Tokyo]
In this article: algorithms, ddi, display driver ic, DisplayDriverIc, displays, glare, lcd, mobile devices, MobileDevices, photo sensors, PhotoSensors, samsung, Samsung Advanced Institute of Technology, SamsungAdvancedInstituteOfTechnology
All products recommended by Engadget are selected by our editorial team, independent of our parent company. Some of our stories include affiliate links. If you buy something through one of these links, we may earn an affiliate commission.
Share
Tweet
Share