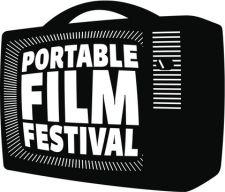 If you're like me, you consider yourself something of a film connoisseur, attending film festivals every chance you have. But not all of us are fortunate enough to live nearby the Tribeca Film Festival. No worries. The Portable Film Festival is launching this Wednesday, and it will let you download 67 pre-selected films from all over the world to your PSP. The films were created specifically for the small screen, and they include animations, documentaries, experimental works, and more. Not only will you be able to download the films to your PSP, you'll also be able to vote for your favorite film. The winner of the competition will earn $1500 and software from Autodesk (that doesn't come cheap, trust me). So, get your Memory Sticks ready! Check out a mini-interview after the cut.

What inspired the Portable Film Festival?
Simon: The release of the Video iPod in October 2005. That really marked a significant change in the way people perceived film and television. Andrew was travelling through the States at the time and called me from an Apple store in San Francisco at some ungodly hour rambling about video iPods and videocasting. Within 48 hours we came up with the concept and Andrew got on a plane and headed back to Melbourne to start working on it.

Does film really work on a screen so small?
Simon: Grab yourself a portable media player, seriously, you'll know what I'm talking about. The resolution is amazing. Sure, we all love the big screen, but the reality is that we can't always make it to the cinema. Now there's a little cinema in your bathroom, at the tramstop, on your desk, etc...why not make the best of it?

Does PFF exist in opposition to traditional film festivals?
Andrew: Traditional Film Festivals will always have their place. Viewing film on the big screen is a beautiful experience and one that will never disappear, however if you are short on time or if you live in a regional area then that experience can't always happen. The Portable Film Festival complements traditional film festivals.

OK, so people side-load a film to their portable device, what makes you think they'll go back to the site to vote on it? Hmmm?
Simon: Same way that people go back and give their comments about anything on the web. We're dealing with a generation of people who are use to commenting through the online world – whether that be on MySpace, blogs, band sites or politics. I think society has reached a level of acceptance of this communication and most importantly – it's fun! People will want to see what other people are writing about.

In this article: 3gp, film, film festival, FilmFestival, portable film festival, PortableFilmFestival
All products recommended by Engadget are selected by our editorial team, independent of our parent company. Some of our stories include affiliate links. If you buy something through one of these links, we may earn an affiliate commission.
Share
Tweet
Share