Brookstone declares bankruptcy after more than 40 years of business 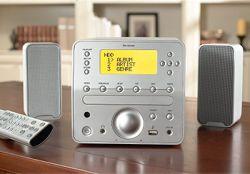 Consider companies with an affinity for cubes that offer digital audio players and you'll probably think of Apple -- progenitor of the G4 Cube and the large glass one crowning its Fifth Avenue store -- or perhaps the developers of the MobiBlu player, once the "world's smallest" that was sold exclusively at Wal-Mart for a time. But specialty retailer Brookstone also has an MP3 device that embraces the six-sided solid. Hanging it around one's neck, though, would be a feat even for Flavor Flav.

While many products exist that enable you to stream music from your PC to a stereo in another room, or to act as docking speakers for the iPod, the SongCube is one of the few shelf systems on the market that includes its own hard disk for storing music -- no tenuous streaming or PC required. Other products in this exclusive club include the aging JVC NXHD10 executive microsystem, which includes only a 10 GB drive, and Sony's NetJuke line, available only in Japan.

The SongCube's main unit is about as tall as an iPod Hi-Fi (sans iPod) and about the third of the width of one, although it's about 25 percent deeper than Apple's iPod speaker accessory -- quite compact at first glance but not, geometrically strictly, a cube. Its speakers are also unobtrusive and Brookstone even bundles speaker stands with the system. However, there's a catch. The SongCube requires the use of its floor-standing 50-watt powered subwoofer where the main power switch is located. Normally, this wouldn't be much of a drawback. However, it comes into play when loading music onto the device, as I'll discuss shortly.

Its large scroll wheel-like control can be used only for volume; menu items must be traversed using up and down buttons. The SongCube includes two aux in ports and boasts optical output but, overall, the sound was simply passable and the unit doesn't get very loud. Compared to most shelf systems, though, the SongCube is a master of MP3 manipulation..It can play MP3s from MP3 CDs or its massive 80 GB hard drive and rip music from compact discs or even its FM radio. With capacity to spare, the SongCube can also rip songs in "CD quality" in addition to MP3, although Brookstone doesn't specify what format CD-quality entails or at what bitrates MP3 files are encoded. Unlike the earlier jukebox product from JVC, the SongCube uses CDDB from Gracenote -- the same CD idenification service used by Apple and others -- to identify tracks on CDs and Brookstone includes a PC application to update the Gracenote database for new releases.

The stereo's interface, which consists of a multi-line LCD, has its limits, though, and ripping a CD requires 16 steps to explain in its manual. With the threat of such tedium afoot, consumers will want to take advantage of the SongCube's best feature, its ability to transfer songs from a PC using an "A to A" USB 2.0 cable. Unfortunately, the awkwardness of having to drag the subwoofer around means that this will be far more convenient if you have access to a notebook PC that you can bring to the SongCube. The inclusion of networking capability so that the SongCube could be loaded and ideally synchronized over a home network would greatly benefit the product.

As it is, Brookstone requires use of its proprietary and spartan Windows software to transfer songs to the device, but the process is straightforward. The software allows music on the SongCube to be renamed or deleted and some basic playlist creation (up to 20 songs), but the path is one-way. You can't retrieve music from the SongCube. At least Brookstone expliclty warns consumers to ensure that their only copy of music is not on the SongCube. A more commonly encountered annoyance is the SongCube's boot time; it needs 22 seconds to "wake up" before it's ready to play.

Introduced at nearly $700, the SongCube contained a hard disk to swallow, but Brookstone recently sliced the price to $400 -- still expensive for a shelf system, but closer to the value of having a massive music library at your fingertips. Given that it seeks to address both the technically adept with USB 2.0 transfer and Luddites who simply don't want to have to keep large libraries of CDs nearby, one can forgive many of its compromises. For those who don't want to fuss with a PC, or at least don't want to fuss with one after an initial data transfer, the SongCube strikes a unique chord.

Ross Rubin is director of industry analysis for consumer technology at market research and analysis firm The NPD Group and a contributing editor for LAPTOP. Views expressed in Switched On are his own. Feedback is welcome at fliptheswitch@gmail.com.
In this article: Brookstone, features, On, Ross, rossrubin, Rubin, SongCube, Switched, SwitchedOn
All products recommended by Engadget are selected by our editorial team, independent of our parent company. Some of our stories include affiliate links. If you buy something through one of these links, we may earn an affiliate commission.
Share
Tweet
Share