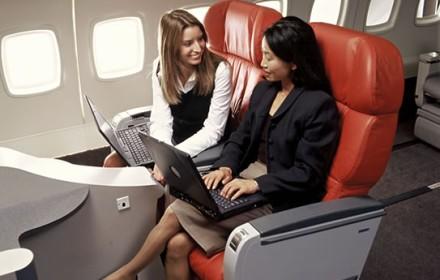 For those of you a-feared of losing your in-flight internets due to Boeing's recent decision to shutter their Connexion service, it looks like there could be more hope on the horizon. Turns out Panasonic is going to give it a shot, with their new service that bumps speeds to 12Mbps/3Mbps from Boeing's weak-sauce 5Mbps/1Mbps, and can be easily deployed in planes already prepped for Connexion. In order to have a sizable rollout, and to make sure existing Connexion users aren't left high and dry, Panasonic has set a 60-day deadline for airlines to sign up 500 planes to the service -- they have 150 committed so far. Along with improved speeds, Panasonic is using some cheaper and more compact equipment, and they hope to pass those savings along to the airlines with a wholesale rate comparable to terrestrial access. Whether that means cheaper prices for users remains to be seen -- we're not holding our breath.

[Via Techdirt]
In this article: boeing, connexion, in-flight internet, In-flightInternet, panasonic
All products recommended by Engadget are selected by our editorial team, independent of our parent company. Some of our stories include affiliate links. If you buy something through one of these links, we may earn an affiliate commission.
Share
Tweet
Share