Coby goes nuts with the Google-certified tablets, we go hands-on

Hands-on with the MID7065, Coby's first tablet with Google Play on board 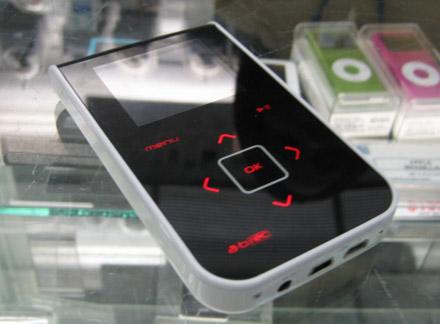 It wasn't so long ago that we caught a glimpse of Coby's new media player, the PMP4320. But what we'd really like to get our hands on is Coby's apparent competitor to the GoGear SA9100 and SA9200, the MP-C951. Although it too was first demoed at CES, Coby has been saying on its site that the player would be "coming soon - Summer '06" for the last few months. According to Coby, this little MP3 player has a 20GB drive, plays MP3 / WMA / OGG files, supports USB 2.0, packs an FM tuner, a voice recorder, and a line-in jack. However, no one had actually seen one of these players in the wild until today, when DAPreview spotted one today at electronics retailer J&R in New York. The site found after holding and playing with the MP-C951 for a few minutes that it had a "solid build," remarking on its touch-sensitive d-pad, noticing that the buttons seemed a bit too sensitive and observing that it had two mini USB jacks on the bottom (one probably for USB On-The-Go. The MP-C951 has an MSRP of $300, but sells at J&R and Amazon for $210. Be sure to catch an additional hands-on pic of the interface on the next page.

In this article: coby, media player, MediaPlayer, mp-c951, pmp, portable audio, portableaudio, usb on-the-go, UsbOn-the-go
All products recommended by Engadget are selected by our editorial team, independent of our parent company. Some of our stories include affiliate links. If you buy something through one of these links, we may earn an affiliate commission.
Share
Tweet
Share