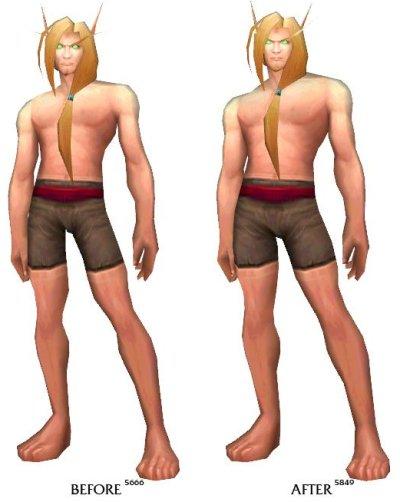 When the Blood Elves were first released, it was pretty clear that Blizzard was trying to give the Horde a "pretty" race. Not that they need it (Horde FTW), but one reason for the imbalances on some servers between Horde and Alliance populations is the lack of a race on Horde side that can not only kill stuff fast, but look good doing it. Yes, beauty is in the eye of the beholder, but it's true that the Blood Elves were the first Horde race to, err, look a little less than rugged. I wouldn't say this myself, but some fans even called the coming of the Blood Elves "the Flaming Crusade."

Blizzard has apparently put a stop to that. In the latest build of the beta, which WoW Guru says is Build 5866, the Blood Elves have been bulked up (males are the only shots we have, but the difference is clear). The males are no longer wiry ballet dancers-- they're not quite as bulky as, say, Orcs, but they've got a little more heft to them.

Of course, given the "beholder" thing, fans are split (aren't they always?). A large number of players aren't real thrilled with the loss of the leaner, meaner Blood Elves-- not only did the thinner frame give them more of the "evil magic" look (I'm sure the voiceovers helped with this as well), but apparently some female players think the bulky Blood Elves look less--let me make sure I get this right-- "sexy." Some ladies even say the change represents a lack of female artists in the Blizzard ranks.

Now, it is important to remember that the Burning Crusade is still changing, so this might not be the final form of the Belfs. But they sure do look... different. I'll leave it up to you: good different or bad different? Two more comparison shots, courtesy of Ephraim on the forums, after the jump.

In this article: beta, blood elves, BloodElves, burningcrusade, expansion
All products recommended by Engadget are selected by our editorial team, independent of our parent company. Some of our stories include affiliate links. If you buy something through one of these links, we may earn an affiliate commission.
Share
Tweet
Share