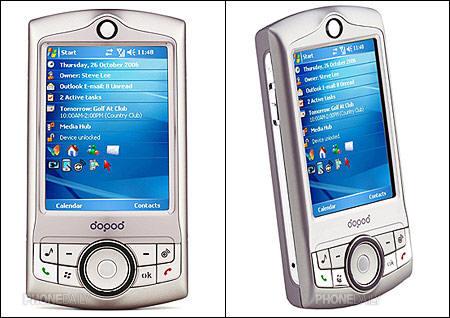 Dopod's cozy relationship with HTC (which we're thinking just might have to do with HTC's ownership of the firm) continues with the announcement of three new models: the M700, D810, and C800, based on the HTC Artemis, Trinity, and Herald, respectively. All three designs are fairly bleeding-edge, with the Herald yet to see an official release. Meanwhile, the M700 variant of the Artemis ups the reference design's ante by packing in a full 256MB of internal storage, a move that HTC says makes this a multimedia version of the product, and so far it's a Dopod exclusive -- is HTC giving preferential treatment to its in-house brand? Say it ain't so! Look for all three to drop in Dopod-friendly regions of the world (read: Asia) over the coming months.

Read - the::unwired
Read - MSMobileNews
In this article: artemis, c800, d810, dopod, edge, gsm, herald, hsdpa, htc, m700, mobile, multimedia, trinity, umts, windows mobile, windowsmobile
All products recommended by Engadget are selected by our editorial team, independent of our parent company. Some of our stories include affiliate links. If you buy something through one of these links, we may earn an affiliate commission.
Share
Tweet
Share