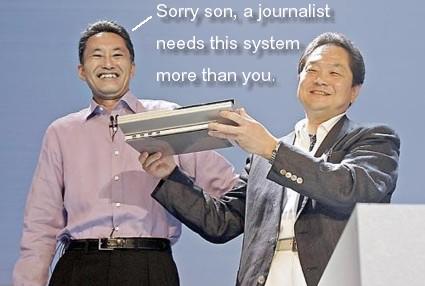 File this one in the delicious irony department: the same day Kotaku's Brian Crecente posts a video of his son playing a brand new demo unit of the PS3, SCEA boss Kaz Hirai tells the Associated Press that his 12-year-old son doesn't yet have a system. Despite the younger Hirai's begging, Kaz said that his son "hasn't touched one and he hasn't seen one ... that's only fair for everybody."

Can this possibly true? Do members of the press now rank higher in the battle for new Sony hardware than the president of the company? Or was Hirai's quote a Steve-Ballmer-style "I feel your pain" PR feint designed to mollify gamers hurt by expected shortages? We report ... you decide.

In this article: hirai, Kaz hirai, KazHirai, PS3, riiiidgeracer
All products recommended by Engadget are selected by our editorial team, independent of our parent company. Some of our stories include affiliate links. If you buy something through one of these links, we may earn an affiliate commission.
Share
Tweet
Share