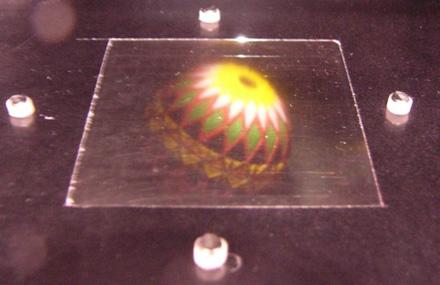 While making concrete slabs double as displays may prove useful when dressing up those otherwise drab skyscrapers, creating 3D-like images from real objects throws in a much-needed dash of geekiness. The National Institute of Information and Communications Technology (NICT) and Kobe University have partnered to craft "a thin-panel type device which forms 3D images in the air." Although 3D devices have a less-than-stellar track record when it comes to overcoming the "gimmick" stereotype, this rendition looks to have a bit more potential than usual. This offering is made by forming a "100 μm-thick Ni layer" on a glass plate, and punching a bevy of 100 μm square holes in it; when objects (such as the toy ball pictured above) are placed below the table, a "floating visual" appears. Moreover, this rendition doesn't require viewers to look from certain angles or with certain lighting scenarios like many forms of holography oftentimes do, and the team hopes to eventually conjure a 3D image of a human "if they can substantially enlarge the device size" while keeping its current attributes in tact.

[Via The Raw Feed]
In this article: 3d, floating, holography, images, kobe, nict, visuals
All products recommended by Engadget are selected by our editorial team, independent of our parent company. Some of our stories include affiliate links. If you buy something through one of these links, we may earn an affiliate commission.
Share
Tweet
Share