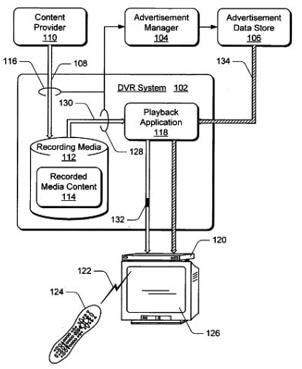 While Microsoft isn't exactly the first name we'd guess to be associated with a new DVR tidbit, the firm has nonetheless filed a patent for "DVR-based targeted advertising." Apparently, Microsoft's idea is to eliminate the "dilemma" that DVR users purportedly face when watching shows a week or so after its original air date. Since many commercials (like weekend sales) are time sensitive, viewing last week's ads today isn't likely to do you any favors if the information is already outdated. Microsoft is hoping to come to the rescue by establishing an "advertisement data store," from which an "advertisement manager" detects when an ad is supposed to be shown and fills that spot with a current, up-to-date spot so you witness fresh plugs during old shows. Although the concept is at least somewhat sound, the folks at Redmond presumably don't spend much time surveying actual DVR owners, as they'd probably find that a good percentage of them utilize that fast forward button as much as possible, regardless of how "fresh" the ad they're cruising through actually is.

[Via PVRWire]
In this article: ad, advertisement, advertisers, dvr, microsoft, patent, pvr, skipping, software
All products recommended by Engadget are selected by our editorial team, independent of our parent company. Some of our stories include affiliate links. If you buy something through one of these links, we may earn an affiliate commission.
Share
Tweet
Share