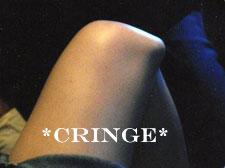 No doubt growing tired of assaulting the smiling, unprotected face of its owner, the Wii console now turns its cataclysmic death beam to more useful parts of the human anatomy. One unlucky lady discovered this during a recent session of Wii Sports Tennis when her knee suddenly ceased functioning in a natural way. According to the testimony on Wii Have A Problem, the destructive console conspired with the high heels she was wearing at the time and ultimately brought her down to her dislocated knee.

With the inclusion of an additional photo of paramedics surrounding the injured player, we once again have to consider the possibility of this being a fake injury (and one that could just as easily have occurred in a Dance Dance Revolution session). Perhaps it's time for our savvy readers to confirm or debunk this one. What say you?

In this article: gaming mishaps, GamingMishaps, Wii, wii have a problem, Wii injury, Wii Sports, Wii Tennis, WiiHaveAProblem, WiiInjury, Wiinjuries, WiiSports, WiiTennis
All products recommended by Engadget are selected by our editorial team, independent of our parent company. Some of our stories include affiliate links. If you buy something through one of these links, we may earn an affiliate commission.
Share
Tweet
Share