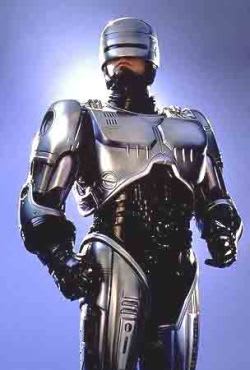 Law enforcement officials across the country have been using robots for some time now to scope out potential bomb threats, intervene in hostage crises, and make dozens of fresh donuts each day, but a new bot being developed for the Waukesha Police Department is the first one we've seen endowed with a potentially lethal weapon. After researching all of the pre-built tactical bots on the market, Waukesha officer Daniel Baumman decided that none met the specific needs of his unit, so he cleverly recruited student volunteers from the Milwaukee School of Engineering to design one for him; in a classic win-win situation, the students get academic credit for building the killbot out of donated parts, while the city gets free tech and only has to pay for fuel and maintenance. Although this real-life Robocop has already proven its skill at negotiating unfamiliar structures -- even climbing up and down stairs -- the students have not yet been able to implement a radio-control system that works reliably through walls, severely limiting its utility. Once they finally find a wireless standard that can operate through physical impediments, the little bot will be tasked with assisting the department in diffusing dangerous standoffs: not only can it seek out an armed criminal holed up in a building, its on-board Taser allows it to incapacitate the target with extreme prejudice. This is all well and good, but we sure don't want to be around the first time Waukesha's policebot comes face-to-face with an E.D. 209, as the RPG- and machine gun-toting juggernaut will easily shrug off those few jolts of electricity and respond with a bot-killing storm of firepower.

[Via The Wireless Report]

In this article: daniel baumann, DanielBaumann, milwaukee school of engineering, MilwaukeeSchoolOfEngineering, policebot, robocop, waukesha police department, WaukeshaPoliceDepartment
All products recommended by Engadget are selected by our editorial team, independent of our parent company. Some of our stories include affiliate links. If you buy something through one of these links, we may earn an affiliate commission.
Share
Tweet
Share