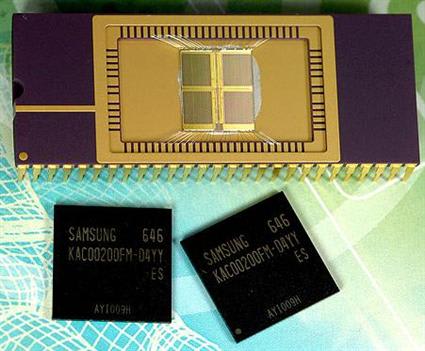 Being that Kingston went and introduced its own blazing fast DDR2 RAM, Samsung's hitting back by announcing its Powerhouse Fusion Memory Solution, dubbed OneDRAM. But Samsung's not gunning for the gamer's wallet necessarily, as its new device is specifically geared towards "handsets, game consoles, and other digital applications such as 3D graphic work." By taking a "dual-port" approach, the RAM "sharply decreases" the time it takes to transfer data between processors, not to mention reducing power consumption by 30-percent. Moreover, Samsung claims that "a single OneDRAM module can replace at least two mobile memory chips in a high-end smartphone," further stating that "five-fold" speed increases were realizable in cellphone response and gaming console operations. While we're not sure how much Samsung plans to charge cellphone / console manufacturers for this snazzy new module, you can expect to see handsets loaded with OneDRAM "by the second half of 2007."
In this article: dram, fusion, LPDDR, memory, OneDRAM, OneNAND, ram, samsung
All products recommended by Engadget are selected by our editorial team, independent of our parent company. Some of our stories include affiliate links. If you buy something through one of these links, we may earn an affiliate commission.
Share
Tweet
Share