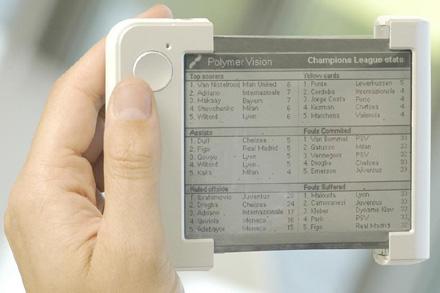 If there's one thing the business-savvy CEOs of the world know, it's that you don't want your competition to get too far ahead of you, and just as Plastic Logic announced its plans to build the first electronic paper plant in Dresden, Germany, Polymer Vision is trying to make good on its nearly two-year old promise. During 2005's IFA expo, Philip assured us all that we'd be blown away by the firm's rollable, bendable displays in a mere two years, and now that 24 months have nearly elapsed, a company spinoff is looking to make it happen. According to a German report, Polymer Vision is still on track for "commercializing the foldable PV-QML5 display" that we've all grown quite fond of. Planning to use the technology in e-books and electronic map guides, the initial 4.8-inch display will tout a 320 x 200 resolution, 10:1 contrast ratio, support for four gray tones, and be only 100 micrometers thick. Sadly, no hard dates were passed down as to when we could expect the first production batch to head out to consumers, but now that there's some serious competition brewing just a few miles down the road, we'd bet a good bit of effort goes into making that 2007 date a reality.

In this article: bendable, bendable display, BendableDisplay, berlin, e-books, e-ink, e-paper, foldable, foldable display, FoldableDisplay, german, germans, germany, heise, maps, philips, polymer vision, PolymerVision, pv-qml5, rollable, rollable display, RollableDisplay
All products recommended by Engadget are selected by our editorial team, independent of our parent company. Some of our stories include affiliate links. If you buy something through one of these links, we may earn an affiliate commission.
Share
Tweet
Share