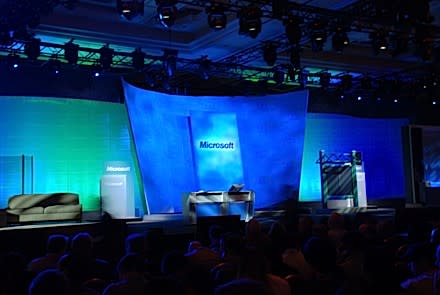 6:20 (PST) - The connection is spotty as hell, but Ryan and I are here at the Bill Gates keynote, which should be starting shortly. Stay tuned for updates -- at least barring a failure of our EV-DO lifeline.
6:22 - They're asking us to take our seats

6:25 - Over the PA: "Ladies and gentlemen, the keynote is beginning in five minutes."

6:33 - Eight minutes later: "Ladies and gentlemen, the keynote will begin in two minutes." See, even Microsoft's keynotes can't launch on time... We kid, we kid!

6:36 - Lights are dimming, looks like we're about to get going. It's starting. A visual history of CES is playing on the giant monitors next to the stage.

6:39 - Gary Shapiro, President of the CEA is on stage. He's giving the usual spiel about all the industry leaders who are speaking this year.

6:41 - "It is my great privilege to introduce Bill Gates as a featured speaker."

6:44 - They're showing highlights from past Gates keynotes - this is the 10th year he's spoken.

6:49 - Bill Gates is walking out on stage. "Good evening, I've always loved coming back from Xmas to go right into the most manic environment ever. Are you going to keep giving the keynote, but not sure about after that, might be talking more about infectious diseases."

6:50 - "It's amazing to see the progress over the course of the year. The digital decade is truly happening. 65% of homes have digital cameras. More broadband penetration. 40% of homes have multiple computers."

Portable devices proliferating, growing part of the PC market, connections with WiFi and 3G, getting information wherever you go."

6:52 - "What are some the metrics we have here. Devices with high fidelity. Six megapixel cameras and up. high definition screens that make you drool. Now it connects up to high def cable, PC, games. All taking advantage of that capability. Network bandwidth has gone up. Processors opening memory capacity up to 64bit."

Graphics revolution let's us represent reality on screen. Seeing in games, VR, presentation richness that all these great devices deliver. It's really quite phenomenal. Storage space, people are talking terabytes, or even petabytes of storage."

6:53 - "We have amazing hardware, love walking the floor, who has the biggest LCD, the biggest hard disk. But we need to deliver on promise of digital decade. Delivering means more than just great hardware. CE defined as much broader industry."

6:55 - "An enviroment where people want to do things across multiple devices with many different people. Delivering on connected experiences, where people are productive, where they're mobile, playing games, that's key element that's missing. For Microsoft, it's a big big milestone, foundational products are moving into the marketplace. First of that is Vista, lots of hard work. Most important release of Windows ever, highest quality, we've ever done."

6:56 - "Vista and the PC continue to have a central role, all these devices have to work together. Vista is a big project, rather than talk about features, rather talk about what we've been through."

6:57 - "Process we've been through, Beta 2., out to 2 million people, RC out to 5 million, in depth went in and interviewed people in seven different countries. Biggest investment ever into a piece of software, by the far the most used piece of software, any improvements can save time and enable people to do amazing things."

With Office, new UI, connect up to Office Live services, richness improved by UI. Features users couldn't find, now they can find. New UI was a risk, but it's worked out, getting great feedback."

6:59 - "Live services, ability to share files, email, connect schedules, so can flow to yours or other devices. A lot of innovation to connect Windows up with those services. As we expand those things, building on that base, get most Windows PC users viewing as integral part of experience."

7:00 - "Great way to understand why we're so thrilled is to see demo. Justin Hutchinson coming to demo Vista". Justin's walking out.

7:01 - Can search every Vista PC on home network. Shadowcopy - Can restore previous versions of documents with a couple of clicks.

"Vista gives you a safety net"

7:04 - Now showing off Windows Live Search, with Virtual Earth 3D tech built into Vista. Can be used with Xbox 360 controller.

7:05 - You can fly around a la Google Earth. Can include real-time traffic info.

7:07 - Sportslounge: "Developed by MSFT and Fox Sports. Watching live HD feed of football game. Getting real time scores for every program in channel lineup. Get real-time alerts about fave players and teams."

You can set Sportslounge up to follow all your fantasy sports teams.

7:09 - Demoing minimized media center video. Now we're on with photos. "In windows Vista the place to edit and organize all your photos is Photo Gallery." Clever, clever name. Demoing burn-to-DVD with DVD Maker (yet another witty moniker), themes etc.

"Microsoft continues to download new features - Ultimate Extras. Groupshot, new feature which combines good features of two bad photos into one good photo". (Like if one person's eyes are closed in one pic or whatever.)

7:11 - "What else are people doing with photos. A new Ultimate Extra called Dreamscene, full motion desktops."

Any video can be set as desktop background. Justin walks off stage, Bill is back on.

7:15 - Still talking about the "phenomenon around the Windows environment."

7:16 - Introducing new PC designs enabled by Vista. Touch screen: HP TouchSmart PC. Selecting photos to print, etc. Toshiba: Portege R400. Ability to have SideShow alert on side of machine and see info even when device is closed. Dock with UWB that doesn't even require you to plug in. Sony: Vaio TP1. Medion UMPC. "Spanning wider variety of design points, strength that comes from great hardware partners."

"These ones I've just shown you are timed for the Vista launch."

7:20 - Video just ended. "Speaking of great things our partners have done with us, talk about new space, we worked very closely with PC. Defining a Windows Home Server."

HP-style commercial playing, but it's Bill instead of Jay-Z or Mark Cuban.

7:23 - Coming out 2nd half of this year. "Features: automated backup, connectivity to all PCs, Zune, Xbox, and remote connectivity, if you're somewhere else, can come in and get files in secure way. No complexity. If you want to grow capacity, just plug new storage in, lots of expandability, software automatically detects it. Can get terabytes of data on this device."

"We think it's a category that can explode in importance."

7:27 - "A year ago Bill introduced URGE music service, creating platform for music around the globe. We did add a 2nd part in 2006 with introduction of Zune. Very exicted about what we've done. In our segment, we're already no, 2. On track to sell a million. Zune is off to a great start. Service to expand, improve software and hardware, community will grow. You'll see us in the leadership position in the years to come."

7:28 - "Mobile phones, some of the hottest selling phones in the market. Not just about phone calls, not just about email, it's about IM, movies, TV, music, connected entertainment on my phone., Think abotu Cingular Treo, Blackjack, Motorola Q.

In 2007 see that continue to grow. All of these things are why WinMo excels and why we outsell BlackBerry in the market. That's mobility"

7:30 - "Talk about gaming. Games for Vista is critical to our efforts in that area. PC and Windows is number one platform in the world. 200M peiople eveyr month play games on Windows PCs. Expand with Direct10. Making it easier to use. Games for Windows about hardcore gamers, also about casual gamers. This is a very broad ecosystem."

Showing video about PC gaming - Postal Service, 'From Such Great Heights" is playing in the background."

7:32 - Video ended. "Games for Windows is a growing market. But of course, while leading platform, our 2nd is Xbox 360. We've become the leader in this next gen. We've sold 10.4 million consoles in 37 countries."

7:33 - "This ecosystem is alive and growing. Games is what this is going to be about going forward, sold 2.7 million copies of Gears of War. 160 titles on platform, will double to 300 titles this year."

Showing a video of Halo 3

Can play with friends whether they're on Vista PC or Xbox 360. Rolls out on Live service this summer. Three billion hours of gaming so far.

7:40 - TV and movies. "Big news is HD and how fast that is taking off. I wanna talk about four ways to get HD movies today on MSFT ecosystem. HD-DVD player add-on for Xbox 360. Perhaps bigger news is that HD-DVD format has been top selling format.

2nd way you can get that experience: on Media Center. 30M copies of Media Center worldwide. 3rd way is with Xbox Live Video, introduce in November, 1000 hours of content. Adding Lion's Gate to the mix for even more content."

7:43 - "4th and final area, is what we call IPTV. In five markets with providers to roll out IPTV to consumers. Market will become major part of TV delivery ecosystem."

7:45 - Demo is running on Xbox, using Xbox dashboard to toggle between live TV and games.

"I want to point out that Xbox 360 allows partners to differentiate themselves. Available THIS year, by holiday 2007."

Robbie is wrapping up part about connected entertainment.

7:48 - Robbie walks off stage. Bill is back once more. "Our ambition is to give you connected experiences 24 hours a day. Whatever it is, we want you to have the info you're interested in. One area that demands special work: connecting to the car."

7:51 - Mark Fields from Ford is walking out on stage. Demoing Sync, fully integrated, voice activated system. Ford exclusive. Integrates all of your devices in the car. Address book automatically downloaded from your phone via Bluetooth."

7:54 - "Sync would have originally been for luxury cars, going to be on a dozen Ford Motor Company models this year. Sync gives us the oppt. to improve appeal and capability and value of our products."

Mark Fields is leaving the stage. Gates: "Taking the time to look further out, how all of this will change in years ahead. Home in four or five years, as we get further out. Incredible breakthroughs that can make a big difference."

7:57 - He's showing a kitchen of the future, which is honestly kind of hilarious.

8:03 - Bill's wrapping up: "There are some fun challenges ahead. Excited for all of us to see the fulfillment of the digital decade. Thank you!"

That's all!
In this article: bill gates, BillGates, ces, features, keynote, microsoft
All products recommended by Engadget are selected by our editorial team, independent of our parent company. Some of our stories include affiliate links. If you buy something through one of these links, we may earn an affiliate commission.
Share
Tweet
Share