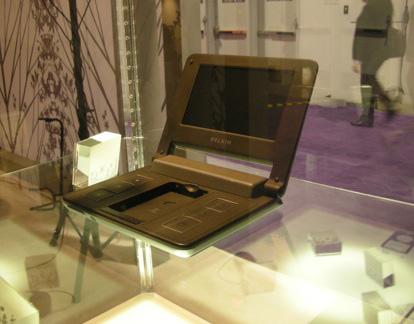 We know, we're slightly bummed too that yesterday's brief "iPod" announcement wound up not being a beautiful hard drive-based widescreen video iPod, but nevertheless, a prototype shown at CES gives iPod video owners a glimpse at what big screen playback would actually look like. This Belkin creation was spotted by TechDigest, and aside from sleek, black enclosure, widescreen display, and gaping hole just begging for an iPod video to come on home, we don't much about it. Mimicking the design of so many portable DVD players already out, this PVP takes its cues not from an optical disc, but from a movie-playing Apple. The spies thought they overheard that the unit featured a rechargeable battery, which would make sense considering its portable nature, but couldn't confirm it. Of course, until Belkin actually decides to produce these things, it's likely a moot point anyway, but it sure looks sellable.

In this article: 5g, apple, belkin, CES, ces2007, ipod, movie player, MoviePlayer, portable, portable audio, portable video, portable video player, portableaudio, portablevideo, PortableVideoPlayer, prototype, pvp, video
All products recommended by Engadget are selected by our editorial team, independent of our parent company. Some of our stories include affiliate links. If you buy something through one of these links, we may earn an affiliate commission.
Share
Tweet
Share