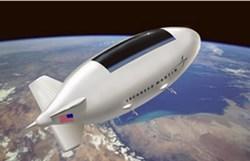 Although it's not exactly shocking to hear of yet another homeland security application that seems to border on Big Brother, Lockheed Martin's High Altitude Airship could keep an elevated eye on 600 miles of US countryside at any given time, and if all goes as planned, we'll have 11 of these things floating over our everyday activities by the end of the decade. The HAA prototype is a ginormous airship that measures 17-times larger than the Goodyear rendition we're all used to seeing above sporting events, and is designed to hover 12 miles above the earth in order to keep tabs on what's happening below. The airship is slated to be solar-powered and should stay in a geocentric orbit for "up to a year," and if equipped with high-resolution cameras, a single one could cover everything "between Toledo, Ohio and New York City." While Lockheed Martin is thrilled with the $40 million project they've been awarded, it's certainly understandable to get a little worried about how these blimps will actually be used, but a company spokesperson suggested then an entire fleet could actually be used for "border surveillance" -- and hey, we need a little help down there anyway, right?

In this article: airship, big brother, BigBrother, blimp, cameras, contractor, defense, government, haa, High Altitude Airship, HighAltitudeAirship, homeland, homeland security, HomelandSecurity, Lockheed Martin, LockheedMartin, paranoid, security, surveillance, us, usa, watching
All products recommended by Engadget are selected by our editorial team, independent of our parent company. Some of our stories include affiliate links. If you buy something through one of these links, we may earn an affiliate commission.
Share
Tweet
Share