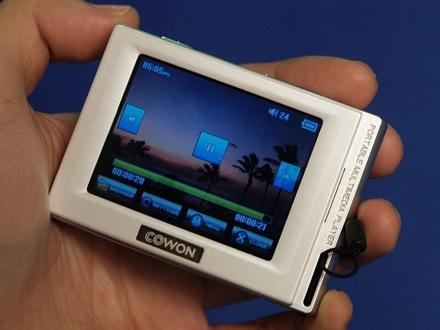 CNET Asia just tossed up an "excellent" 8.4/10 rating along with their Editor's Choice award to Cowon's new 4GB iAudio D2 multimedia player. As you'd expect, it gets high praise for including a "crispy and sharp" touchscreen on a digital media player making the "gorgeous" new interface even more intuitive to use. While it works just fine with your grimy finger, they also include a quirky triangular stylus (resembling a guitar pick) which is tethered to the device on an elastic cord. A bit annoying, but beneficial when slotted into the back of the D2 allowing it to stand on a tabletop. There's a long list of positives: the usual audio format support in addition to OGG Vorbis, FLAC, APE; the ability to expand from the on-board 4GB to 8GB via the SD/MMC card slot; the battery which lasted an "astonishing" 46 hours and 23 minutes; and a quick 5.33MB per second drag-and-drop transfer speed. Other than some slight lag when viewing pictures and the occassional "scratchy" radio reception... there's just not much to harsh on. Oh, 'cept the fact that you still can't get one off the shelf in North America or Europe.

[Via Impress, thanks woopieboy]
In this article: cowon, cowon d2, CowonD2, d2, iaudio, iaudio d2, IaudioD2, portable audio, portable video, portableaudio, portablevideo, review, touchsceen
All products recommended by Engadget are selected by our editorial team, independent of our parent company. Some of our stories include affiliate links. If you buy something through one of these links, we may earn an affiliate commission.
Share
Tweet
Share