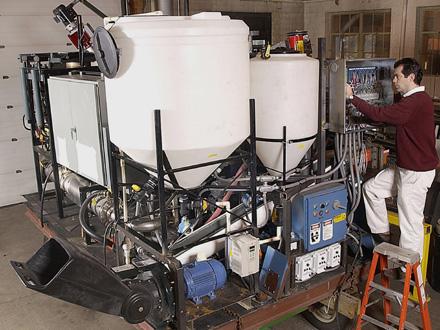 Although developing alternate fuel sources is most certainly a worthwhile effort, a group of Purdue scientists are looking to demolish two birds with a single, um, bag of refuse, as its portable generator not only creates useful electricity, but it disposes of worthless garbage while it's at it. The aptly-named "tactical biorefinery" processes several kinds of wastes at once, which it then converts into fuel via two parallel processes before burning the results in a diesel engine to power a generator. The device, which comes in just a hair smaller than a "small moving man," can crunch through multiple kinds of garbage at once, creating energy completely without discrimination towards certain kinds of gunk, and is already being eyed by the US Army for future battlefield usage. Interestingly, initial prototypes are showing that it can produce "approximately 90 percent more energy than it consumes," and considering that it pulverizes everything inserted into it, soldiers won't have to worry about leaving behind remnants of their stay. Ideally, the backers would love to see the unit available in commercial settings as well as in the military, but we think this thing will be a real winner when it can compress gobs of garbage into vicious (smelling) pellets and launch grotesque projectiles while keeping our planet green.

In this article: army, biorefinery, earth, energy, generator, green, Indiana, portable, power, purdue, refinery, research, tactical, trash, university, waste
All products recommended by Engadget are selected by our editorial team, independent of our parent company. Some of our stories include affiliate links. If you buy something through one of these links, we may earn an affiliate commission.
Share
Tweet
Share