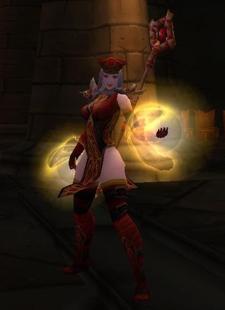 Scarlet Monastery is one of the most-loved instances in the game, partly because the bosses in there are so memorable-- who's ever going to forget Harod yelling "Blades of Light!" or High Inquisitor Whitemane shouting "Arise, my Champion" (along with the ensuing realization that you're now fighting two bosses at the same time)?

That why it's so cool to see, in the first Caverns of Time instance in Old Hillsbrad, all our favorite Scarlet Monastery minions running around as children. I ran CoT for the first time last week, and I spent a long time wandering about Old Southshore, listening to the conversation in the inn, and checking out all the old lore. I saw both Herod as a boy, and little "Sally Whitemane" as a pigtailed girl running around oblivious of her distant future.

Except, wait a minute. Apparently the future isn't as distant as it seems. Zerolimite points out on the forums that Old Hillsbrad is really only the Hillsbrad of seven years ago. Which means that even if Sally Whitemane, blonde and pigtailed, is even thirteen, that only makes her at most 20 in Scarlet Monastery. So what's with the white, err... mane? Likewise, Herod is just a kid seven years ago, so that makes him like 15 when he's hulking and yelling in the Armory. All this time, we've been killing teenagers.

And as an interesting sidenote, seven years ago means it's very likely our characters were alive as well. Our guild's main tank, Paws of Thunderhorn, has said that he was actually interred in Durnholde Keep with Thrall, but even though we poked around the camps there, we never saw him (or at least recognized him-- this was a whole seven years ago). As for my Orc Shaman, he definitely was held in an internment camp, but it was further north, near Lordaeron. I tried to head up there and see if I couldn't pull off a little Back to the Future action, but for some reason, I couldn't seem to leave Old Hillsbrad...

In this article: cavernsoftime, herod, instances, scarletmonastery, whitemane
All products recommended by Engadget are selected by our editorial team, independent of our parent company. Some of our stories include affiliate links. If you buy something through one of these links, we may earn an affiliate commission.
Share
Tweet
Share