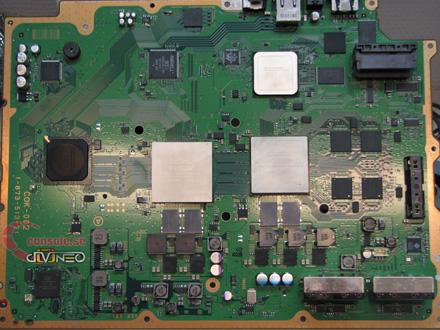 Typically, we don't single out just one aspect of an entire console or gizmo, as it's always a beautiful sight to see a perfectly assembled console do its thang in reverse, but Sony's European PlayStation 3 is a different animal. If you'll recall, the American PS3 features a neatly attached PS2 chipset to make sure that backwards compatibility was all but a minor issue, but even after countless delays and a staggeringly high price point, Europe's unit was hamstringed still. While we'd heard that the late-coming PS3 would sport limited abilities in the PS2 department, it still made us cringe when those whispers were proved true, and now its time to witness just how bare this motherboard looks as it uses emulation to crank up a few (literally) PS2 titles. Grab your tissues, and click on through for a few more shots.

In this article: backwards compatbility, BackwardsCompatbility, britain, console, cracked open, CrackedOpen, dissected, england, euro, europe, mobo, motherboard, pics, playstation 3, Playstation3, ps3, snapshots, sony, splayed, uk
All products recommended by Engadget are selected by our editorial team, independent of our parent company. Some of our stories include affiliate links. If you buy something through one of these links, we may earn an affiliate commission.
Share
Tweet
Share