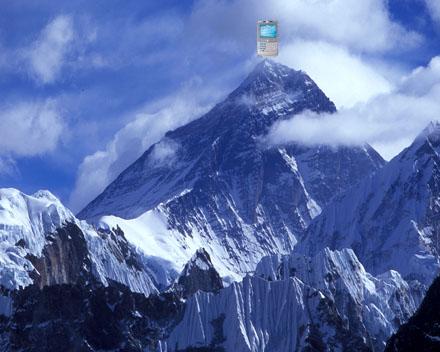 We're pretty happy with just being able to get a clear cellular signal at our desk during the day, but a British mountain climber named Rod Bader seemingly won't be satisfied until he's able to gobble up some airtime minutes on top of the highest mountain on Earth. In a rather silly publicity stunt sponsored by Motorola, Bader will attempt to climb Mount Everest in late May, and, weather permitting, place a phone call from the summit through a tower located in China that has a clear line of sight to the north side of the peak. However, this means that world record holder Bader (he's climbed more of the world's highest points than anyone else, apparently) will need to follow a more difficult route to the top, and although he will have a support crew tagging along, the lack of Powersauce bars may prove to be his undoing. Oh, and if Bader emerges triumphant by asking someone "Can you hear me now?" for the record-breaking call, we've already hired some sherpas to ensure that he never makes it down from that mountain.
In this article: motorola, mount everest, MountEverest, phone call, PhoneCall, records, rod bader, RodBader
All products recommended by Engadget are selected by our editorial team, independent of our parent company. Some of our stories include affiliate links. If you buy something through one of these links, we may earn an affiliate commission.
Share
Tweet
Share