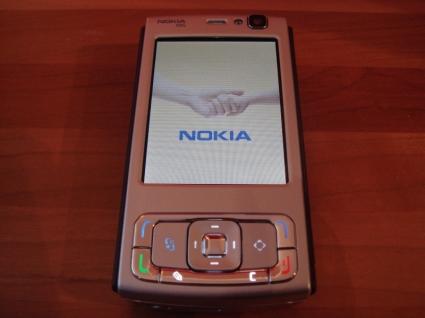 There's something about a $750 mobile that incites conflicted feelings of shock, awe, lust, and disgust in its beholder. It's unavoidable. Every time you lay eyes on the N95, you can almost hear Nokia saying, "we're through playin' -- this is our phone multimedia computer to end all phones. We know it's not for everyone, but whatever, here it is." As a reviewer with a unit on loan, your paranoia runs deep; you start to have irrational thoughts about your precious cargo being run over by garbage trucks, lost down sewer drains, and stolen by shadowy figures in darkened alleys, so we can't even imagine what kinds of nightmares keep actual owners of this superphone awake at night. Alas, we hear sales have been strong, with units hard to come by just days after its US debut. Is the love justified? Read on for our quick take.

Gallery: Hands-on with the Nokia N95

Our first observation after holding it: it doesn't feel any more expensive than its Nseries siblings. That's not necessarily a knock -- Nokias are almost always exceptionally well-built devices -- but it's worth noting that your extra cash doesn't buy you better (read: Vertu) build quality. Don't get us wrong, we know you're really paying for the N95's guts, not its glamor. For unlocked customers, the phone is available in "plum" and "sand" rears, while the front is always dressed in the typical Nokia silver. We'd have preferred black, but we suppose they could be saving that for a Music Edition down the road.

Speaking of music, audio is one of the N95's big pushes with integrated stereo speakers, stereo Bluetooth, a 3.5mm jack, FM radio, and a whole keypad devoted to music controls. As audio players go, the N95's bundled software is nothing to write home about, but we were delighted with sound quality. The speakers were loud and clear -- on par with some laptops, we'd say -- but the headphone jack was the real treat. Static from electrical interference was near zero. In fact, we couldn't hear any at all; with a decent set of Shures plugged in, it was dead silent. As with the speakers, the headphones were plenty loud and crisp.

A decent chunk of the cash you're sinking into the phone goes directly into its 5 megapixel autofocus Zeiss lens. It delivers, too -- the N95's camera app rivals point-and-shoots in the $200 to $300 range and picture quality is decent. Unlike most cameraphones, the N95 truly can take the place of a basic digicam for day-to-day use. It's not going to shame your Hasselblad -- or your sub-$1000 DSLR, for that matter -- but you'll likely be able to snap pics that folks won't instantly recognize as having been taken with a phone. Focusing is a bit slow, as is the post-shutter processing, but hey, remember, it's still a phone.

The last of the N95's secret weapons is its integrated GPS. Like the camera, we found that it does a bang-up job -- for a phone. The time required to lock satellites would be considered unacceptable if this were a dedicated nav unit, but once they were locked, we were pleased with its ability to hold the signal. Update times were also good, with our position being redrawn on the display several times per second. Map redraws were often painfully slow due in part to the fact that the device downloads detail maps on the fly over its data connection, though that data connection is also one of the nav app's strong points. Not only can maps be kept up to date, but you get goodies like city guides (for a fee) and points of interest (sadly, no traffic conditions right now). Point to point routing seemed effective enough; the phone was rarely able to calculate a route by itself, but there's an option to "search" for a route online which seems to work. In action, directions are belted out in a soothing English accent.

We could drone on and on about the phone's feature list. Put simply, it's stacked. WiFi's in there (works like a champ, by the way), the software bundle runs deep and wide with goodies like Quickoffice and a totally bangin' version of Snake (see a screen shot in the gallery), there's a front-facing cam that does us yanks very little good but can still be used to take self-portraits and the like, and the web browser is utterly fantastic. We also found the device to be a little smaller than expected -- if you're used to a Wizard, you'll feel right at home with the N95's shape and size, and the slightly rubberized back is a welcome touch. As expected, the N95 is cursed with S60's infernal "out of memory" messages, though they're easy enough to solve by simply following instructions and closing a couple open apps.

Is the N95 a buy? Cost aside, this is one of the best smartphones and perhaps the best S60 device we've ever laid hands on, but let's be honest, $750 can be a tough pill to swallow -- especially considering we get nothing better than EDGE data. Add in 3G bands we can use stateside, though, and we're on board 110 percent.
In this article: edge, features, gsm, hsdpa, mobile, n95, nokia, review, s60, slider, symbian, umts
All products recommended by Engadget are selected by our editorial team, independent of our parent company. Some of our stories include affiliate links. If you buy something through one of these links, we may earn an affiliate commission.
Share
Tweet
Share