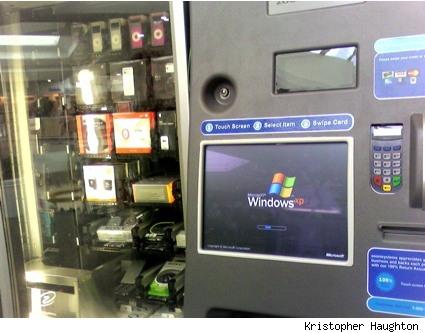 Those ZoomSystems iPod vending machines that we once gently mocked are both more successful and more ubiquitous than we thought they'd be. Still, it seems they aren't flawless. Reader & iPod shopper Kristopher decided to give one of the machines at his local mall a try; unfortunately, as soon as he started using the touchscreen, a familiar error screen appeared, and then... well, you can see what's underneath the pretty surface.

Sure, lots of retail kiosk applications use XP, but c'mon -- for an iPod sales system, shouldn't Mac OS X be the first choice?

[That's a joke, in case our visitors from Digg are confused. While there are plenty of Point Of Sale systems for the Mac, I don't actually know of one that's intended for vending-machine deployment, and even a Mac Mini is a bit high-end for the build cost of vending machines. That aside, it's probably not the best call to go with XP for a vend setup either...]

In this article: bluescreen, bsod, funny, ipod, vending, xp, zoom systems, ZoomSystems
All products recommended by Engadget are selected by our editorial team, independent of our parent company. Some of our stories include affiliate links. If you buy something through one of these links, we may earn an affiliate commission.
Share
Tweet
Share