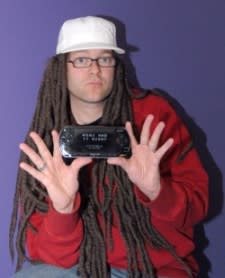 Microsoft VP and Xbox creator, J Allard made a bet with Newsweek's N'Gai Croal, that the PSP wouldn't be able to match the PS2 numbers when it came to units shipped over a 12-month period. Judging from the screenshot, we can tell who lost. Hey J, do those dreads itch?

The bet originated from playful dinner conversation between Croal and Allard after E3 in 2005. If Sony hadn't managed to ship over 10 million, N'Gai would have had to "J Allard" his head. Yes sir, shaved bald. Although humorous, we're not entirely convinced the punishment is exactly fitting. Why not up the ante and increase the stakes a bit? Now, a more fitting gesture of good faith would be to snap a picture of a purchase order receipt (courtesy of J Allard) for 50 PSP units. An early Christmas gift for every hard worker in J's office. Or for those Halo fans, how about an agreement to instigate talks with the powers-that-be on porting some 1st party software to the PSP? After all, with that with that many units shipped, Microsoft would have a nice, big user base of which to unleash their gaming pleasures upon. Ooh, now we're talking. So how about it J? Any other numbers you want to bet against?

In this article: e3, halo, j allard, JAllard, n'gai croal, N'gaiCroal, newsweek, playstation 2, playstation portable, Playstation2, PlaystationPortable
All products recommended by Engadget are selected by our editorial team, independent of our parent company. Some of our stories include affiliate links. If you buy something through one of these links, we may earn an affiliate commission.
Share
Tweet
Share