InPEN adds some smarts to the stylus 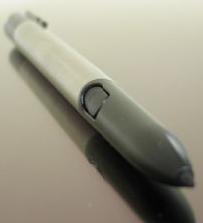 Tablet PC devices seem to be getting overshadowed (as always) by other initiatives at this year's WinHEC, but scrappy Arizona outfit InPlay Technologies is hoping to swing some attention back to the platform with the release of the InPEN, its new computerized RF stylus. Unlike traditional analog styli, the InPEN contains a programmable microcontroller that broadcasts a unique identifier to the tablet, which allows multiple pens to be linked to the system. InPlay is touting several uses for the tech, such as simultaneous editing (each user gets a different color ink), change tracking, and device security, but the company hasn't explained if the system extends the current Windows Tablet Edition digitizer or totally replaces it. We're also curious to know what happens when the stylus battery dies -- can you still use your finger? We probably won't get any answers for a while, as InPlay says it's still shopping the tech to tablet manufacturers.

In this article: inpen, inplay, stylus
All products recommended by Engadget are selected by our editorial team, independent of our parent company. Some of our stories include affiliate links. If you buy something through one of these links, we may earn an affiliate commission.
Share
Tweet
Share