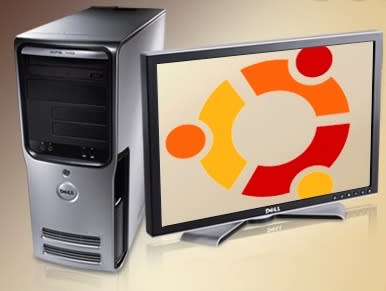 There's still no press release but those three Dell's running Ubuntu are just minutes away from donning their direct-sales wings according to Dell's official Direct2Dell site. Just like we heard, the three rigs available for the Linux pre-load include the E520 Dimension desktop, Inspiron E1505 consumer laptop, and XPS 410 media rig, now suffixed with an "n." All three will be up by 4pm CST later today from Dell's "open" site. Prices start at $599 for your choice of the E520n desktop or E1505n notebook while the XPS 410n will cost you $899. Interestingly enough, Vista pre-load pricing starts at $369 for the E520, $699 for the E1505, and $899 for the XPS 410. Huh? It's just a start according to Dell, with "plenty more to come."

[Via Ramblings from the Marginalized, thanks Steve D.]
In this article: breaking news, BreakingNews, dell, ubuntu
All products recommended by Engadget are selected by our editorial team, independent of our parent company. Some of our stories include affiliate links. If you buy something through one of these links, we may earn an affiliate commission.
Share
Tweet
Share