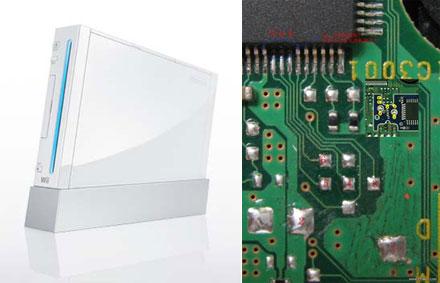 Wii modders have already hit (and overcome) a few snags as a result of changes Nintendo has made to the console, but it doesn't look like the company is ready to give up the fight just yet, now reportedly introducing (as rumored) another round of revisions to stop folks from messing with the Wii's innards. According to at least one retailer in Japan, Nintendo has taken the somewhat drastic step of actually snipping some of the pins from the surface-mounted IC on the Wii's motherboard, making the current crop of modchips virtually useless. Currently, the changes only seem to apply to NTSC-J model Wiis sold in Japan, with no word of any NTSC-U model Wiis suffering the same fate -- although we wouldn't bet on them being immune for long. Of course, all this is of little concern for anyone planning on playing by Nintendo's rules, but the rest of ya may want to grab a moddable Wii while the going's still good -- or at least wait for the inevitable workaround to this latest impediment.
In this article: mod, modchip, nintendo, wii, wii mod, WiiMod
All products recommended by Engadget are selected by our editorial team, independent of our parent company. Some of our stories include affiliate links. If you buy something through one of these links, we may earn an affiliate commission.
Share
Tweet
Share