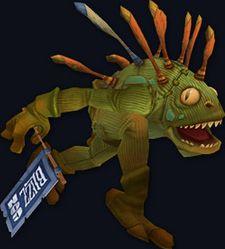 Details are surfacing about the fun and games that is Blizzcon 2007. Today, Blizzard announced some of the swag that you can expect when you attend this August.

First up, is the revelation that every attendee will receive a beta key to "an upcoming Blizzard game." Hmm, I wonder what that game could be. Now, I'm not saying for certain that it is Starcraft 2, it may be the next WoW expansion. But I think it's a safe bet that you'll be zipping up a spacesuit and picking up a blaster bigger than your grandmother's station wagon after this convention is over.

Next up is a unique item no one expected to see. Every Blizzcon attendee will receive a special passcode. Once in-game, the passcode can be redeemed for, drumroll please, a murloc suit for one of you characters. Good for the spirited RP event or for spicing up the dragging-on-until-you-want-to-/gquit guild meeting. Maybe even handy for that next machinima piece you were brainstorming.

More swag to be announced in the future. So, what do you guys think? Is a Starcraft 2 beta key in your future?

In this article: beta key, blizzard, blizzcon, blizzcon swag, murloc, murloc suit, starcraft 2, warcraft, world of warcraft, wow
All products recommended by Engadget are selected by our editorial team, independent of our parent company. Some of our stories include affiliate links. If you buy something through one of these links, we may earn an affiliate commission.
Share
Tweet
Share